“Everything Is Holding You Now” 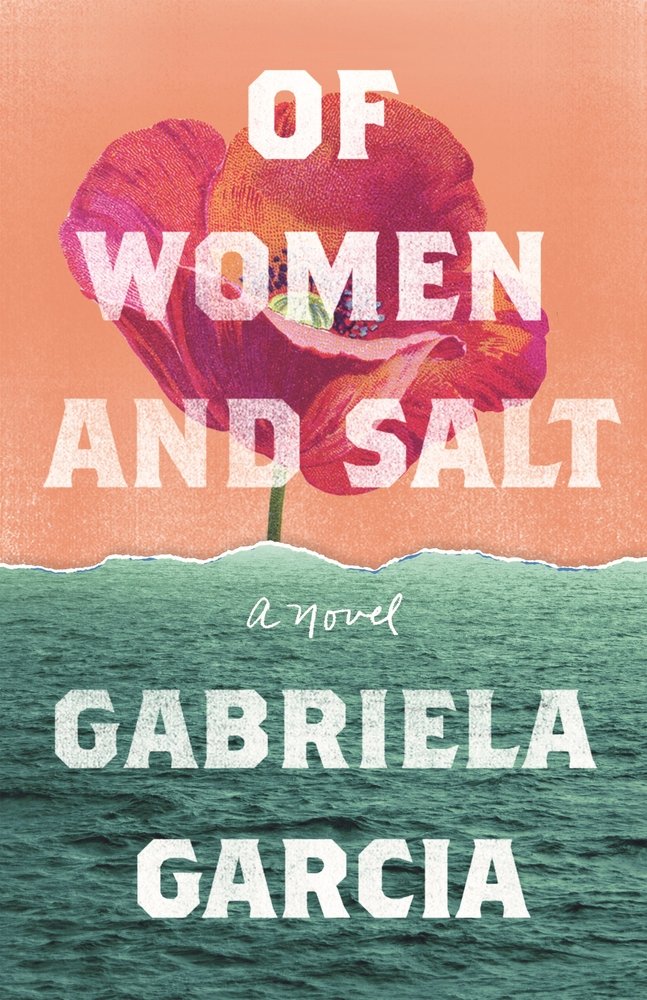 The following is excerpted from Gabriela Garcia's debut novel Of Woman and Salt, about a daughter's fateful choice, a mother motivated by her own past, and a family legacy that begins in Cuba before either of them were born. Garcia is the recipient of a Rona Jaffe Foundation Writer's Award and a Steinbeck Fellowship from San Jose State University. Her fiction and poetry have appeared in Best American Poetry, Tin House, Zyzzyva, Iowa Review, and elsewhere. She lives in the Bay Area.

Blue and red lights disco-dancing across the walls wake her; she watches from her bedroom window. A white van with an official-looking crest. Two agents in black jackets with reflective letters. She shrinks behind the curtain. Only a sliver of scene is visible, and the only light on the street that hasn’t burned out blazes a cold glow. The letters on the jackets seem to spell out the feeling of the night: ice. Jeanette clutches her bathrobe tight.

The neighbor woman is walked out in handcuffs, wearing pajamas. On her pants, Minnie Mouse stands on tiptoe with fingers clasped at her face, hearts of varying sizes exploding in the air around her mouse ears. Jeanette doesn’t know her. Just knows that she works every day, even Sundays. She sees her leave her house always in the same pink smock, with the same caddy of cleaning supplies. Jeanette’s breath creates little spirals of fog on the window. One agent, a woman with a burst of auburn curls, shrugs her jacket closed with one hand while the other holds the chain that links the woman’s handcuffs. No shouts, no screams, no tussle. The agents and the neighbor woman walk in silence to the van, lights still spinning like Fourth of July fireworks. The male agent slides the door shut with a bang. The rumble of the engine. The cloud puff of exhaust. Tiny wires crisscross all the windows, so Jeanette cannot see inside the van, cannot see the neighbor woman as the van drives down the road past every blackedout town house window and makes a right, disappears. It all happens in minutes.

Jeanette tries to fall back asleep but cannot. She rubs lavender oil on her wrists, takes a tab of melatonin. Lies there, eyes open, for what feels like an hour. Finally she dials the number, making sure to press *67 first to disable caller ID. Mario answers in a sleep-clogged voice. Mario answers because Mario always answers no matter the time of night. And even now, six months separated and six months sober, Jeanette still swallows the rock in her throat as she waits for the click, the familiar voice.

No need for pleasantries or pretense. No need to even announce herself. Of course it is her. A sigh on the other side. A rustling of sheets.

“We can’t keep doing this.”

A sound like a snap. Turning on a light?

“That brand of ginger ale that you like,” she says. “The one they stopped selling at the supermarket near our old house? I saw it today where I shop.”

“Where do you shop?”

“At least tell me you’re still in Miami?” Silence.

“Jeanette, how long are we going to play games like this? If you won’t even tell me where you are, do you call just to break my heart even more? Just to make it harder for me?”

Blue and red lights disco-dancing across the walls wake her; she watches from her bedroom window.

She can picture him. He sleeps shirtless and in boxers. She can picture the print of the sheets, the color, the smell of just-washed. The pile of library books on his nightstand. The color of the walls. They picked it out together: Eggshell Bavarian Cream. What’s he reading these days?

He says: “Just tell me you are okay.”

She thought she was calling him to talk about the raid, the neighbor woman. Turns out she has nothing to say about that. Also turns out: sobriety is a daily exercise, especially at night. She pictures her nightstand of just a year ago: crushed OxyContins, grapey cough syrup to send her pain-free into morning. A kind of prayer. She pulls the covers to her chin. Wonders what real prayer she’d whisper if she were the kind of woman who prayed.

What she knows about the neighbor woman: likely in her thirties, probably Central American, comes home each evening around six or seven. She has burnt-sugar skin and dark black hair. Always her face is perfectly made up. Arched eyebrows. Deep brown lips. Eyelashes that curl up like flower petals. Unmarried? Jeanette has never seen her with anyone, not even a friend. Just a young daughter who gets dropped off every night around eight. What happened to the daughter? She realizes she hasn’t thought about the daughter. The driver who drops off the daughter never gets out of the car. Every day the little girl just runs up to her door and knocks. She is around seven or eight years old, Jeanette guesses. Occasionally their paths cross when she and the neighbor woman are at their driveways. They say hello to each other, the daughter smiles. They’ve never talked more than that. Jeanette is twenty-seven, and she hardly notices or thinks about children.

And now, after the raid, the blood orange of a Miami morning like any other. Of course she is still in Miami. These streets course through the blood—all pastel mini-mall suburban blight, tropical flourish to each dragging second, each concrete bungalow a kind of American dream achieved no matter how crooked the mortgage. No other place calls her home like this. It’s just another day in another home not that different from the one she shared with Mario, only Mario isn’t here.

Jeanette sets her laptop on the kitchen table beside the window. This gives her a view of the neighbor’s house. All day she sits with her headphones on, listening to a psychiatrist define patients by insurance number and ailment. Obsessive-compulsive disorder. Hypomania. Schizotypal personality co-occurring with generalized social phobia. She types furiously, occasionally pausing the tape to search her DSM for spelling and billing codes. She makes a note to order the newest version. She microwaves a Healthy and Lean meatball parmesan with a side of matchstick veggies. She smokes cigarette after cigarette even though her sponsor has warned her to stop because “reliance on any substance or drug is a slippery slope to relapse.” As if everyone in recovery doesn’t smoke. Outside: silence falls, a slow domino effect, cars leaving their driveways until the street is empty of all but Jeanette’s. A few rustling trees. An occasional lizard or bird. No sign of the neighbor woman. No sign that anything at all happened the night before.

By evening Jeanette has finished her transcription work, has emailed it to her temp agency. She readies for dinner, browses the freezer, hums a top 40 tune, Rihanna or Beyoncé or Adele. She glimpses a car driving up to the neighbor’s house. The neighbor’s daughter gets out, and the car U-turns around the cul-de-sac and heads away from the house. Jeanette thinks of rushing out and stopping the car. Explaining that the little girl’s mother isn’t home. But she freezes as her mind weighs possibilities, questions, her role in any of this. She looks out the window. The little girl stands before the neighbor’s door in purple leggings and a flowered polo. She holds a pink backpack with both hands. Stares up at the door. Knocks. Stares. Knocks again. The girl scans her surroundings, and her eyes stop at Jeanette’s kitchen window. They stare at each other.

What can she do? The cold grass crunches beneath her bare feet. A breeze comes and goes, rustles palms. The girl has a look of mild amusement or apprehension or both as Jeanette approaches, as she invites the girl into her home. The girl looks uncertain, frowns as Jeanette kneels before her.

“Just until we find your mom, okay? Do you know where she is?”

“Do you have your mom’s number? Maybe a cell phone?” “She doesn’t have one. I have my number, my house number.”

What she knows about the neighbor woman: likely in her thirties, probably Central American, comes home each evening around six or seven.

“Like an aunt or an uncle maybe? A grandma?”

“They live in El Salvador.”

“Okay, well. We’ll go inside. I’ll fix you a little snack while we try to find your mom?”

The girl hesitates but then takes Jeanette’s open hand. She lets Jeanette lead her into the house, where she lumbers onto a kitchen chair and places her backpack at her feet. Her legs dangle. She is silent, fiddles with a ruffle at the hem of her shirt.

Monosyllables. One-word answers. The microwave beeps. Steam emerges as Jeanette cuts the Hot Pocket in two. She places a paper plate before Ana and says, “It’s hot.” The television announces a sale on brand-name mattresses of every kind. Prices slashed. Unbelievable savings. One-time event. Jeanette pieces together her own made-up stories: Immigration agents busted the mom for a fake social security number, some other harmless action born of necessity. The mother is desperately trying to explain that she had a daughter coming home from—

“Where were you again last night?”

Ana blows into the opening of the Hot Pocket while holding it with a paper towel. She pauses, places the pastry down.

Ana regards Jeanette in a manner that makes her suddenly self-conscious. As if Ana knows something isn’t right. As if Ana thinks Jeanette knows more than she’s giving away. As if Ana can see right through her.

“Sometimes I sleep at Jesse’s.”

“Will she come for you again?”

“When my mom calls and tells her to pick me up at school.” “Will she pick you up from school on Monday?”

The girl hesitates but then takes Jeanette’s open hand. She lets Jeanette lead her into the house, where she lumbers onto a kitchen chair and places her backpack at her feet.

Alternatively, the mother committed some kind of crime and Immigration picked her up. The mom caught a whiff that something was up and left her daughter at the babysitter’s overnight. She’s calling a relative or a friend right this moment to collect her. Someone will show up any minute now. Jeanette is embarrassed by her own problematic thoughts. Good immigrant, bad immigrant? She should know better.

“Did you say all your relatives are in El Salvador?” “Yes.”

Ana takes a bite. She chews. She swallows.

Jeanette opens her fridge. A moldy cube of cream cheese. Shredded Monterey Jack. White Cuban bread. She pours Ana a glass of tap water. Feels shame at where her own thoughts go. Does it even matter why ICE picked up her mom? Still, a child at her kitchen table. Still, awful that she never even asked her neighbor’s name. She hands Ana the glass of water.

Jeanette closes the door to her bedroom. She lies back on the bed and balances her laptop on her stomach. Google searches: What happens to children if their parents are deported? A link to Child Protective Services. A link to family detention centers in the region. To lawyer after lawyer after lawyer. Another search: How to find someone detained. An Immigration and Customs Enforcement database that requires an Alien Registration Number for the detainee. No phone number she can find. Lawyer after lawyer after lawyer. A light knock on the door. Ana has to pee. Jeanette shows her the bathroom and makes up her mind that Ana will spend the night.

Let's hope the latest book TikTok controversy is the last. 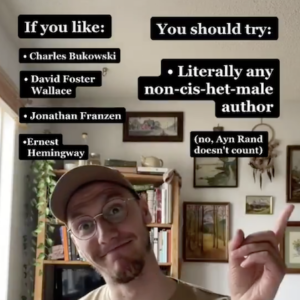 Let's hope the latest book TikTok controversy is the last. I am sorry to report that there is a new controversial TikTok making its way around the literary internet. There’s...
© LitHub
Back to top