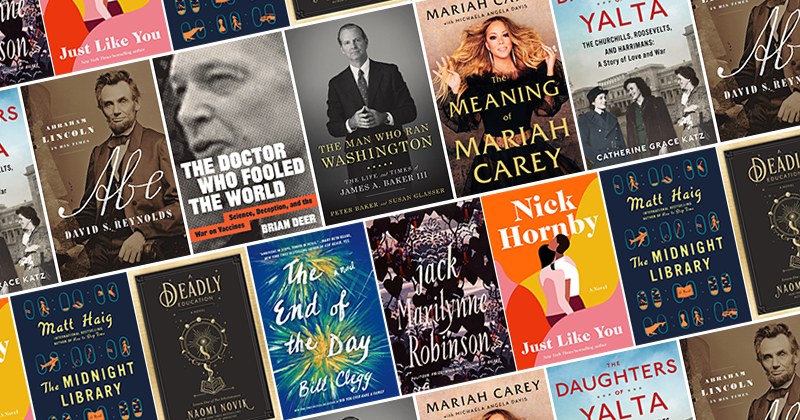 Marilynne Robinson’s Jack, Nick Hornby’s Just Like You, Matt Haig’s The Midnight Library, and Mariah Carey’s The Meaning of Mariah Carey all feature among the Best Reviewed Books of the Week.

Read an excerpt from Jack here

“From the outset Robinson reveals her subtle mastery of both character and language … Striking too to read this novel in 2020, during a global pandemic and the protests of the Black Lives Matter movement: Robinson’s timeless prose, her Romeo and Juliet story, have an eerily timely ring. Jack and Della advance towards their love and retreat from it at the same time: the narrative pull of the book is in entering their troubled dance. Jack fits beautifully into the subtle weave of Robinson’s Gilead books; that said, it could perfectly well be read on its own … Her clear, fluid language is laced with the work of writers who have come before, with references to Shakespeare and Frost and Whitman … Robinson reminds us that the world is ours to make. ”

Read Lori Feathers on the novels of Marilynne Robinson here

“… [a] charming, funny, touching, and relevant comedy … Along with the love affair, Hornby covers the issues of the day with snappy take-no-prisoners commentary … On every page, racial tensions abound … And, of course, because this is a Nick Hornby novel, there’s plenty of music … Throughout, the plot twists and turns; the reader laughs and winces … As these scenes build toward a surprising, well-earned ending, Hornby continues to ask: Should we choose someone just like us, or take a risk? … My only quibble, among such pleasures, lies in certain passages of dialogue, however crackling, that are unattributed, forcing me to backtrack to figure out which lines belong to what speaker, a slight irritation that, on occasion, interrupted the flow. Nevertheless, even if, upon finishing, readers might still not want to kiss their butchers, they’ll be all too willing to plant a smooch on the author of this delicious, prime-cut, filet mignon of a novel.”

3. The Midnight Library by Matt Haig

“This gentle but never cloying fable offers us a chance to weigh our regret over missed opportunities against our gratitude for the life we have … Haig, who’s been frank about his own experiences with depression, is a sympathetic guide for Nora’s journey. His allusions to multiverses, string theory and Erwin Schrödinger never detract from the emotional heart of this alluring novel. And when Nora’s sojourn allows her to realize that perhaps ‘even the most seemingly perfectly intense or worthwhile lives ultimately felt the same,’ and that ‘life simply gave you a whole new perspective by waiting around long enough to see it,’ Haig brings her story to a conclusion that’s both enlightening and deeply satisfying.”

4. A Deadly Education by Naomi Novik

“Intricate world-building, a nuanced and diverse cast and a thrilling plot culminate in the kind of pulse-pounding ending that resolves much, but sets up the next installment with unanswered questions and dangers both new and old … delivers a heroine working hard to thwart a dark destiny. She’s determined not to care what her classmates think, making her character arc–based on reluctant friendships and grudging alliances–satisfying, as is her growing mastery of her magical affinity. Novik somehow conjures up a heroine perched on the line between good and evil, a protagonist readers can cheer for even as they wait for her to dip her toe into the darker side of magic. A Deadly Education is a spellbinding start to Novik’s new series.”

5. The End of the Day by Bill Clegg

Read an excerpt from The End of the Day here

“… unfolds slowly and, as with Clegg’s first novel, depends upon character studies and histories to tell its story from multiple viewpoints. As usual, Clegg’s prose is simple and graceful, his third-person character portraits precise, but his plotting, with its intricate, keen-minded twists give his writing the cumulative effect of poetic ambiguity and mystery. Clegg’s first novel was a novel of grief; this is a masterly story of an attempt at righting the misunderstandings of the past that is resonant and true to life’s inherent uncertainty … the plots converge—a technique that Clegg expertly uses in his previous novel and again here. The result is not a tale of grief, but a poignant story about an earnest attempt to correct the misunderstandings of the past by the end of the day … shifts from character to character without, for the most part, any transition, much like a hard cut between disparate scenes in a movie. Eventually, the novel, as they say, teaches you how to read it, and after a while the shifting viewpoints and multiple time frames begin to make so much sense that you doubt that Clegg could tell the story in any other way. His approach—resolving the present by slowly revealing the past—creates and maintains an atmosphere of mystery and suspense—the ticking bomb.”

=1. The Daughters of Yalta: The Churchills, Roosevelts, and Harrimans: A Story of Love and War by Catherine Grace Katz

Read an essay from The Daughters of Yalta here

“… a substantive debut work of first-rate scholarship … Through letters home and dispatches written by the three young women, Katz efficiently relays this fly-on-the-wall account of how the three sprawling delegations managed to get any business accomplished … Katz effectively shows how these three often overlooked women proved to be indispensable in a variety of ways … Engaging, multilayered history of the best kind, grounded in telling detail and marvelous personalities.”

=1. Abe: Abraham Lincoln in His Times by David S. Reynolds

“Some 16,000 books have been written about Abraham Lincoln—more than any other historical figure except Jesus. But there has never been one like this one by David S. Reynolds. The author, a literary scholar and historian at the Graduate Center of the City University of New York, has written a marvelous cultural biography that captures Lincoln in all his historical fullness … Like any good biographer, Mr. Reynolds takes us through the important events of Lincoln’s life. But unlike previous biographers, Mr. Reynolds spends an extraordinary amount of time presenting his cultural context. In effect, his biography becomes less a narrative of Lincoln’s life than an explanation of his genius. We come to understand fully why Lincoln did what he did, and why he did it when he did it … Because Mr. Reynolds knows so much about this forgotten culture of antebellum America—both the high and low parts of it—he is able to recover the often peculiar and evanescent incidents and conditions that influenced Lincoln’s actions and attitudes … Using popular culture in this way, to fill out the context surrounding Lincoln, is what makes Mr. Reynolds’s biography so different and so compelling.”

3. The Doctor Who Fooled the World: Science, Deception, and the War on Vaccines by Brian Deer

“… a remarkable story and this is a remarkable book. More, whether the author knows it or not, it is a book that takes us well beyond the medical and ethical issues that it covers, helping to explain the political and social predicament that now afflicts so many of us—the crisis in truth and its exploitation by people without scruple … What should amaze the reader of Deer’s book, however, is the weakness, venality, vanity and slowness to action of the medical establishment and its publications and institutions in the face of a rogue doctor. Most of the things that Deer did should have been done by the profession itself. Had he not so assiduously turned every one of Wakefield’s stones over, the man would probably still be licensed to practice here.”

4. The Man Who Ran Washington: The Life and Times of James A. Baker III by Peter Baker

“The core tension that Baker and Glasser must overcome in The Man Who Ran Washington is making James Baker seem relevant today … a reader can have the impression that the authors’ accounting of Baker’s achievements is tinted in sepia … Yet the life story of the man Barack Obama’s national security adviser Thomas E. Donilon calls ‘the most important unelected official since World War II’ is relevant and timely for two reasons. The first is that it provides deep insight into Baker’s strengths at diplomacy—skills that will become even more important as America’s influence ebbs in the coming years. The former secretary of state’s experiences as a public servant offer timeless lessons in how to use personal relationships, broad-based coalitions and tireless negotiating to advance United States interests … The second reason this book matters now is that even though Baker sees himself as temperamentally and philosophically opposite to Donald Trump, his silence in the face of Trump’s outrages reflects the broader complicity of the so-called ‘Republicans who know better’ … the authors do a splendid job reminding readers of the sheer number and weight of decisions that had to be made amid great uncertainty … The authors rightly highlight the dimensions of Baker’s illustrious career that show so much about what is broken in the current American political system.”

“The previously tight-lipped pop star connects dots from her life to her music as she never has before, weaving her lyrics in and out of relevant scenes, and sheds light on the real-life origins of eccentricities that practically ooze out of her pores under glaring studio lights … If she is over the top, here’s a book-long theory of how she got there … A discriminating reader may question whether this book is laying Carey definitively bare or merely reinforcing a painstakingly crafted public image. But what Carey and her co-writer have assembled is such a terrifically readable yarn that the warts-and-some treatment feels impressive either way. It is, above all else, an exceptional entry in the genre … What sounds tough to live through is riveting to read about … She is frequently funny … [Carey] casts herself as, above all things, a survivor of hardship. Much of the focus is not on what she has done but what was done to her … This book sets in type pop music’s ethos of good packaging. To love pop is to appreciate its gloss, and in that narrow but all-important sense, wow does The Meaning of Mariah Carey shine.”