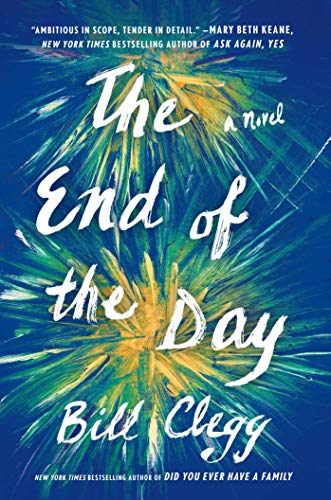 The following is excerpted from Bill Clegg’s latest novel, The End of the Days, which follows the complicated bonds and breaking points of family and friendship. Clegg is a literary agent in New York and the author of the bestselling memoirs Portrait of an Addict as a Young Man and Ninety Days. He has written for the New York Times, Lapham’s Quarterly, New York magazine, Harper’s Bazaar, and more.

His father sings in his sleep. Mostly jingles from the forties—Brylcreem, Schlitz beer, Camel cigarettes. How mild, how mild, how mild can a cigarette be? Smoke Camels and see. His voice is radio smooth, soothing, at least two octaves higher than his regular speaking voice, and sounds young, despite his seventy-nine years. In between the jingles, the same old Bing Crosby song, “Swinging on a Star.” Carry moonbeams home in a jar…

After four days sitting at his father’s bedside, Hap only now notices that the tissue-thin hospital gown bunching around his neck is covered in snowflakes. Small and blue and perfectly spaced a quarter inch or so from each other against worn, gray cotton, their whimsy in this decidedly non-whimsical hospital room like a knock-knock joke slipped into a eulogy.

How many people have worn this gown, Hap wonders. And how often did those sitting bedside wince when they realized their loved ones were covered in snowflakes? Maybe for some it was a comfort, something that lifted their mood, amused them even, if only briefly. Possibly this was the point of the design: to sneak light into a situation that had none. Is that what his father’s subconscious was doing now, returning to these old songs?

Hap had been aware, dimly, from a story he’d overheard Alice, his mother, tell when he was a kid, that his father sang advertising jingles on the radio in college for pocket money. But that’s all he knew—it never occurred to Hap to find out more. It was the same with his father’s job as a photographer with a news agency. He knew little more than that it required him to travel to Asia, Africa, and the Middle East. Another murky half-fact that speckled what little he knew of his father’s life, most of which—like singing in college—now sparked more questions than answers. Four days after Hap’s father had fallen down the lobby staircase at the Hotel Bethlehem, surfacing from more than twenty-four unconscious hours, not recognizing his son or knowing his own name, Hap knew his chance for answers had likely passed.

A flash of resentment heats to an instant and sharp pain at Hap’s temples. Is there anything more galling than the sight of a young man?

His father mumble-hums the Bing Crosby again. The words are now marbles in his mouth, impossible to decipher, but his pitch is still perfect, the sound carefree, bright, from a long-ago time in his father’s life when the future was more vivid and mattered more than the present. When he still had a future, Hap thinks bitterly, standing up and away from the bed, the idea of a point in life where the future ceased—for his father, for him, for anyone—settling on him now, at forty-eight, like a slow, cold fog. He leans awkwardly against the wall next to the one small window in the room, a single pane with no handle or latch that looks over a narrow courtyard to another bank of small-windowed rooms.

Across the way, two floors below, a teenager curls in a window well, head down, arms up and tangled across his face; back and legs twisted into a pretzel that from two flights up looks cozy. Only a kid could bend his body into such a small space, Hap thinks. And only an oblivious, self-centered boy could find comfort here. The exact type of medical calamity the boy is attending is out of view from where Hap stands, the only visible clues a short expanse of putty-colored linoleum floor, and what looks like a pile of coats on a gray metal chair, a perfect replica of the one Hap has been sitting in. He can’t help but wonder who in this boy’s life suffers just out of sight in the same bed his father lies in now, under the same water-stained dropped ceiling, between the same pale pink walls (besides the snowflakes, the only other flicker of whimsy in the place). The boy twists again but miraculously retains his leg and arm-knotted, torso-bent shape, like a snake in motion, coiled. A flash of resentment heats to an instant and sharp pain at Hap’s temples. Is there anything more galling than the sight of a young man? More revolting than all that possibility possessed by a creature so completely ignorant of it? Fuck no, Hap answers his own questions, out loud and louder than he intends, looking away and back toward his father, who is silent now, his chest rising and falling mechanically with the thrum and wheeze of the oxygen machine wheeled alongside the bed. This here, this mess is the very opposite of the rubber-limbed nimrod below.

Young and dumb and full of cum, the crude phrase pops into his head uninvited, something he must have heard in a movie he’d seen on HBO, or, even more likely, something his childhood best friend Gene would have said in high school, or even now over dinner to provoke Hap’s wife, Leah. As if they were both in the room now, huddled on either side of him looking out the window, Hap can hear Gene reduce the boy with this phrase, and in response he can hear Leah just as clearly, with false playfulness and palpable sarcasm in her voice: Playing the part of Gene Grant this evening: Gene Grant! But looking at the boy now, a simple pile of limbs and skin and solipsistic impulses, he can’t help but see him as Gene would. A lucky little fucker. 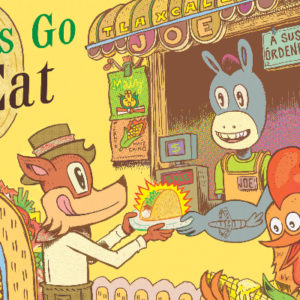 ¡Vamos! Let's Go Eat by Raúl the Third, Read by Gary Tiedemann Every Monday through Friday, AudioFile’s editors recommend the best in audiobook listening. We keep our daily episodes...
© LitHub
Back to top