Via Liveright
By Daniel Kariko

Photographer Daniel Kaliko found out long ago that his most interesting subjects could be found right in his home; he began to devote his time to documenting all insects and anthropods in his vicinity. For any insect aficionados, or anyone looking for a distraction from the insanity of our current human world—the below photos will be sure to shock and awe. 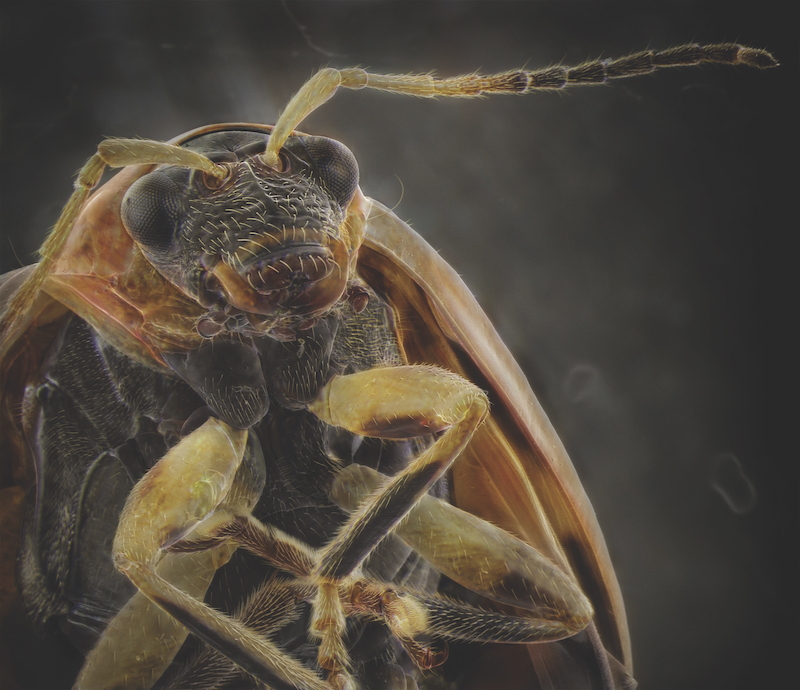 These small beetles really do love beans. They spend all their life stages eating, living, and mating on bean plants. The larvae are relegated to the roots below while the adults dine in style on the leaves and legumes above. While their damage to crops is usually mild, they can spread plant viruses potent enough to decimate a field of soybeans. 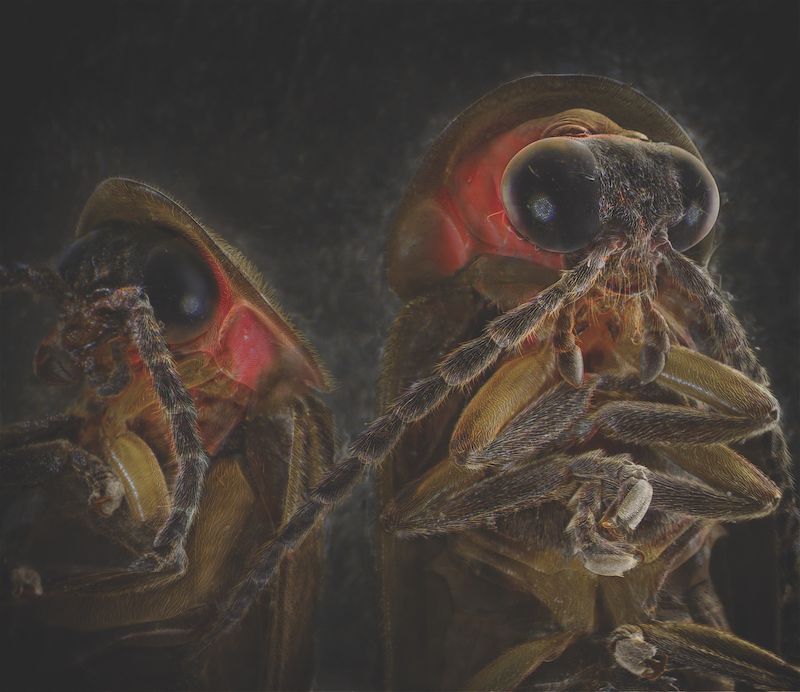 Despite the suggestion of their name, Big Dipper Fireflies are beetles. Lighting up warm summer nights in the eastern United States, they put on a dazzling show. Males light up their abdomens and make a swooping “J” signal to entice females to respond with a flash of their own. Once seen, males approach females with caution, as the male of a different species of predatory firefly might pretend to be a waiting female. Instead of mating, a male might find himself devoured. 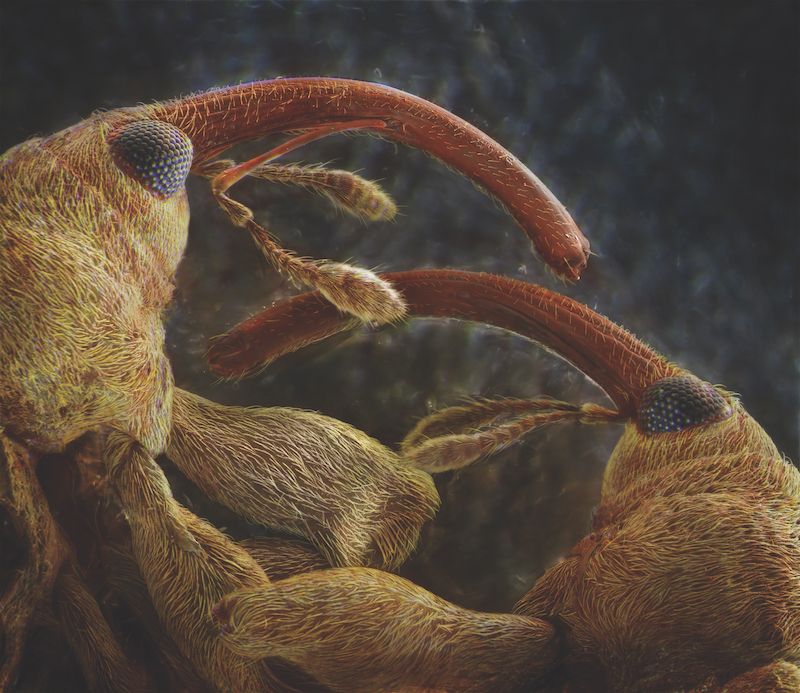 Weevils are also known as Snout Beetles, as their mouthparts are modified into a multipurpose snout with a mouth at the tip. They use this strong structure to bore into hard seeds and other vegetation, where they will create a feeding hole or a place to lay an egg. Females are careful to lay only one egg on each piece of grain or nut so that their offspring don’t compete for a meal. 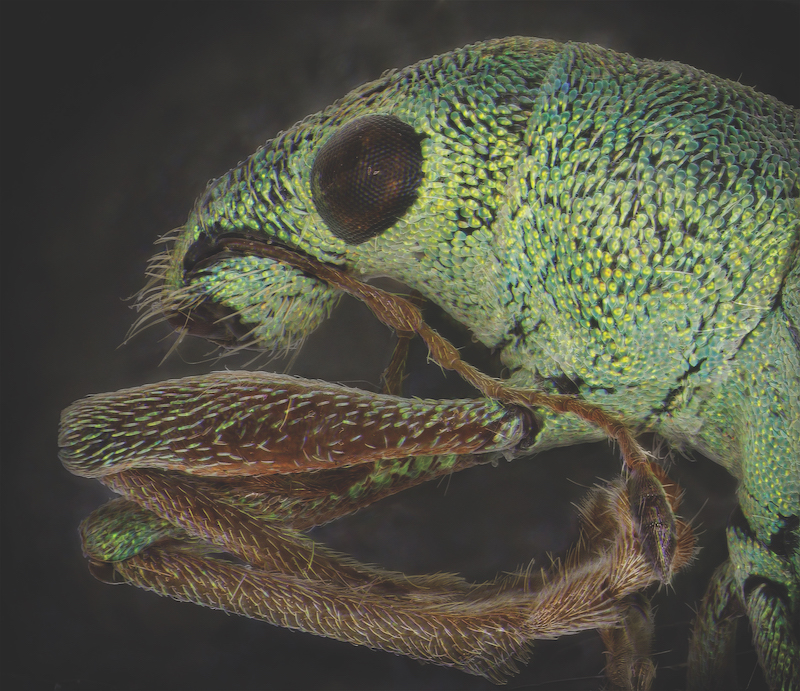 Like many people in North America, this species immigrated through New York in the early 1900s. Coming over from Germany, the Green Immigrant Leaf Weevil found a continent wide open with opportunity and spread all the way west seeking new foods and new homes. Its distinctive green scales help it remain camouflaged and will break off into the mouths of would-be predators. 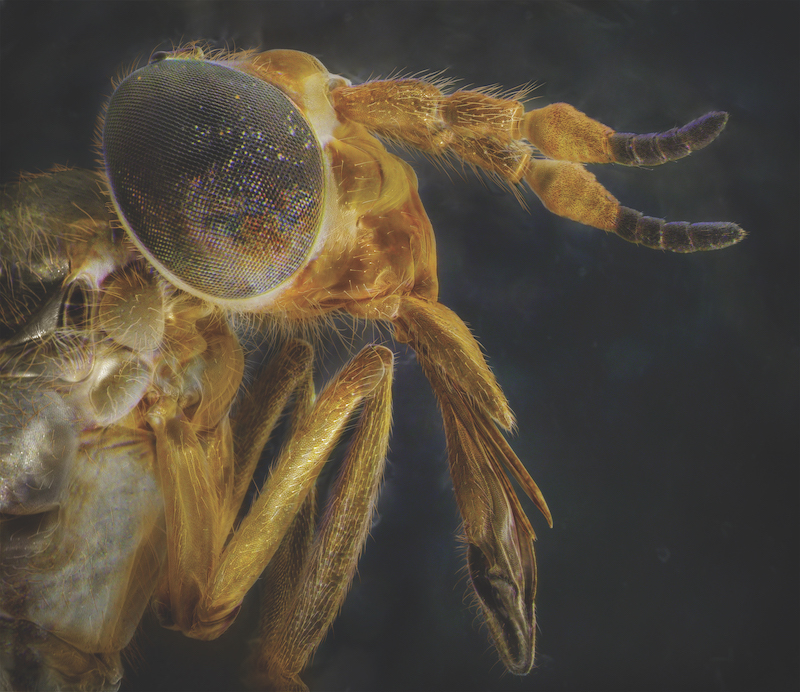 When you are walking in the woods nearly anywhere in the world, during a warm summer morning these are the flies that are likely to spoil your time. Deerflies use their beautiful multifaceted eyes to detect movement and hone in on victims. Like Horseflies, the female Deerfly is persistent in trying to draw blood from victims so as to have provisions for her eggs. The predatory larvae develop in wet areas and are equipped with fangs and venom to immobilize and digest other insects that come across their path. 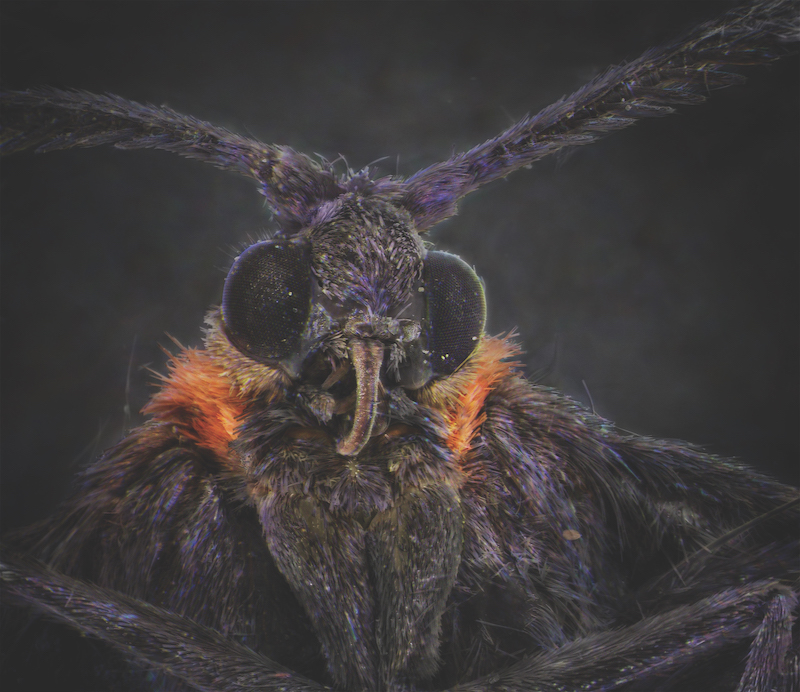 This small, peculiar moth (Lepidoptera) lays its eggs on the underside of grape leaves. When the larvae hatch, they line up and proceed to eat all but the larger veins of the leaf, leaving a skeleton. All the while, the larvae sport black tufts of toxic spines that inflict pain on any unsuspecting person. 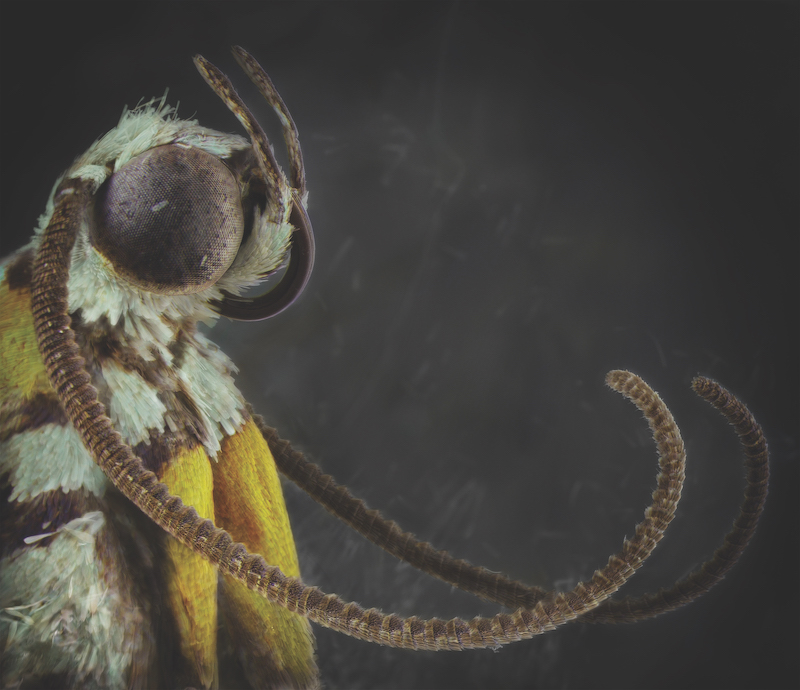 Named after its food, this moth (Lepidoptera) looks more like a flower beetle or a wasp with its striking colors that warn of its toxicity. The female moth will often lay her eggs in an old empty cocoon, and the larvae will spin a web around their food for protection while they dine. Their primary food is the “Tree of Heaven” (Ailanthus), an invasive plant imported from Asia that is a threat to North American ecosystems. 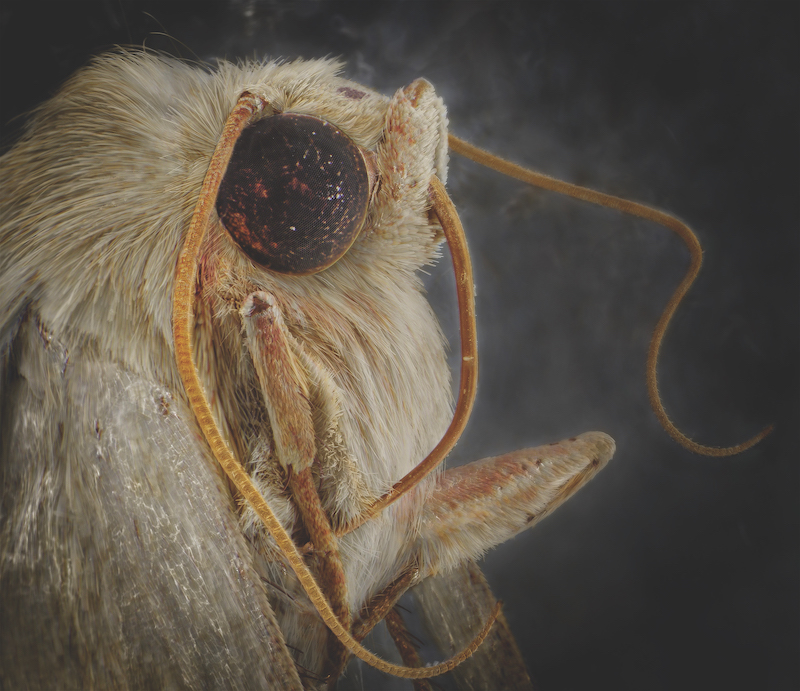 These moths (Lepidoptera) are part of the large Noctuidae family, which accounts for nearly 25 percent of all moths and butterflies. Named for the fact that all are nocturnal, members of this family have evolved the ability to detect the sonar calls of bats to avoid being eaten. When they hear a bat, they stop flying and drop from the sky. Some have developed a sinister side, with a strong mouthlike appendage (called a proboscis) that they use for drinking blood. 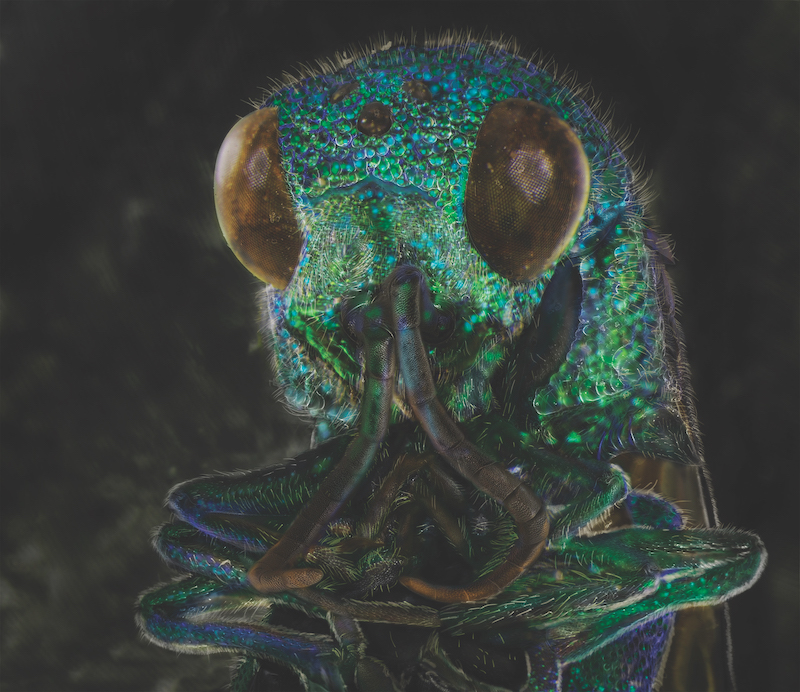 Also known as the emerald wasp, the Cuckoo’s dazzling color is the result of millions of microprisms embedded in its multilayered exoskeleton that refract and reflect light—making the Cuckoo Wasp look like flying jewels. Cuckoo Wasps are parasitic, laying their eggs in other wasps’ nests. If they are caught in the act, they defend themselves by rolling up into a tight ball, protected by their supertough outer layer, which is impervious to bites and stings. 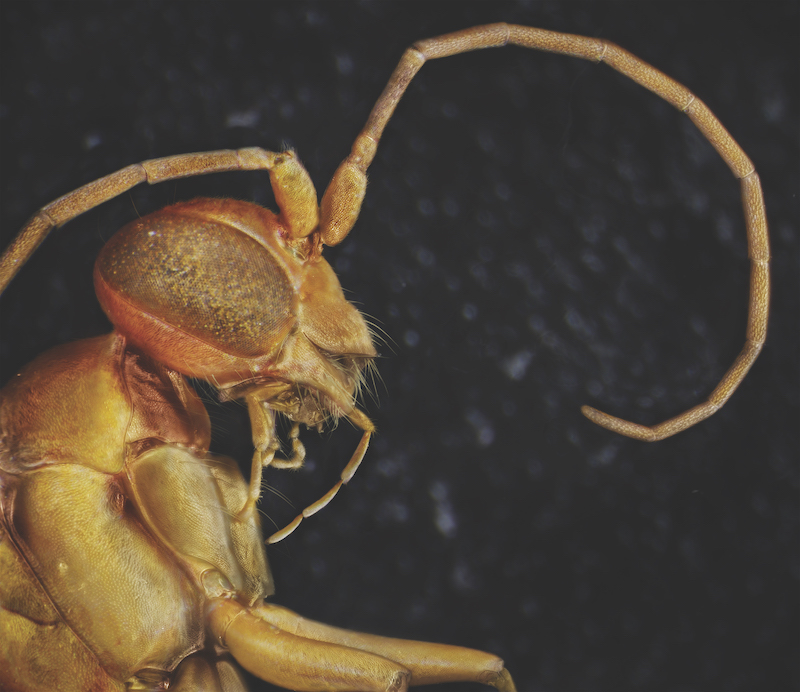 As solitary hunters, these wasps seek out spiders and paralyze them with specialized venom. The hapless spider is then dragged into a chamber, where the wasp deposits a single egg. The wasp covers the entrance with dead ants that release chemicals to deter predators. Entombed, the egg hatches and the larva slowly eats the still-living spider. The larva pupates and emerges as an adult, ready to terrorize more spiders. 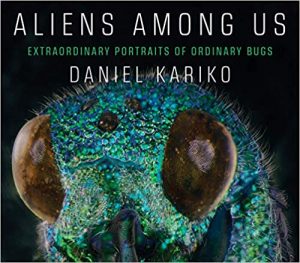 Excerpted from Aliens Among Us: Extraordinary Portraits of Ordinary Bugs. Copyright © 2020 by Daniel Kariko. Used with permission of the publisher, Liveright Publishing Corporation, a division of W. W. Norton & Company, Inc. All rights reserved.

Daniel Kariko is an associate professor of fine art photography at the School of Fine Arts and Design at East Carolina University in Greenville, North Carolina. His work has been shown internationally in galleries and museums.

So, Is Daydreaming
Good For Us? 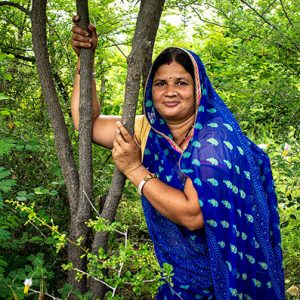 One Hundred and Eleven Trees: Reclaiming an Ancient Relationship Emergence Magazine is a quarterly online publication exploring the threads connecting ecology, culture, and spirituality....
© LitHub
Back to top
Loading Comments...