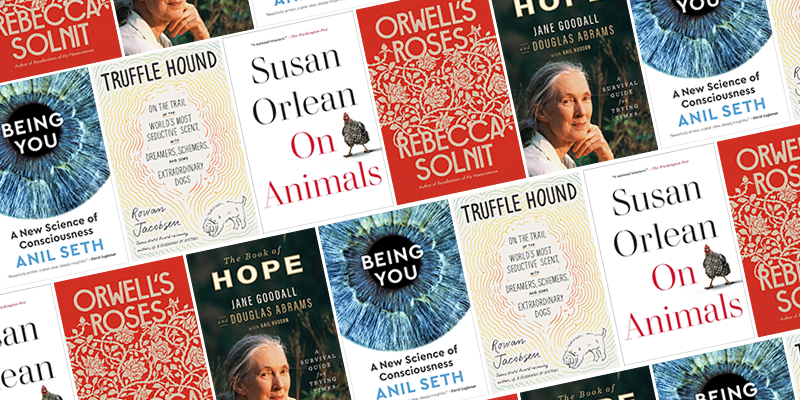 Susan Orlean’s On Animals, Rebecca Solnit’s Orwell’s Roses, Jane Goodall and Douglas Adams’ The Book of Hope, Anil Seth’s Being You, and Rowan Jacobsen’s Truffle Hound all feature among the best reviewed science, technology, and nature books of the month.

“Essayist that she is, Rebecca Solnit pursues her subjects down multiple pathways of thought, feeling, memory and experience, aided by historical research and the intuitive literary hunch, as needed. Like George Orwell as essayist, the subject of her latest book and her model, she deploys the full human instrument in service of her curiosity … wide-ranging yet disciplined … This is Solnit applying economic and social analysis to longstanding cultural mythology. How, the reader wonders, is the life-loving Orwell she has just conjured going to survive this scrutiny? … She implicates us in these comfortable delusions … I won’t give away how Solnit rescues her portrait of Orwell from the bear trap she has sprung on it. Suffice it to say that in the end she throws us up on the shores of our flawed, vulnerable selves through a detailed portrait of Orwell dying in his mid-40s on an island in the Hebrides as he writes 1984. That novel, Solnit convincingly shows, is not primarily about how totalitarianism works but rather about what it destroys: consciousness, experience, life lived with the full human instrument—the very vision of political freedom that she has earlier identified at the heart of Orwell’s values … Solnit doesn’t argue with her own counterpoint. She just creates a frame large enough to contain both revolutionary brilliance and unwitting reactionary associations in the same person—large enough to contain life’s contradictions in a way that only the essay, that humble literary mouthpiece, can.”

3. The Book of Hope: A Survival Guide for Trying Times by Jane Goodall and Douglas Abrams
(Celadon Books)

“Abrams sets the scene for each encounter, ensuring that Goodall’s unique personality, poise, and inner strength shine forth. Their jousting discussions are passionate, candid, and very moving as Abrams asks difficult questions and Goodall responds with enthralling real-life stories shaped by her extensive knowledge, extraordinary experiences, and hard-forged wisdom. Without minimizing the daunting challenges we face as the climate crisis takes hold, Goodall explains that hope is a ‘human survival trait’ that requires ‘action and engagement’ … Bright with photographs, supported by an excellent Further Reading section, and, vibrant with wry humor, scientific fact, grassroots advances, compassion, and spiritual depth, this compelling and enlightening dialogue of hope amplifies Goodall’s mantra: ‘Together we can. Together we will.’”

4. Truffle Hound: On the Trail of the World’s Most Seductive Scent, with Dreamers, Schemers, and Some Extraordinary Dogs by Rowan Jacobsen

“A Mark Kurlansky–esque romp through the science, history, and culture surrounding that most elusive of foodstuffs, the truffle … The author depicts a culture of truffle finding, trading, and eating that is as complex as the aromatic stew of ingredients that goes into one, and he commits to paper lovely images that combine both intrigue and a certain level of surrealism … It’s an altogether delightful narrative … Fans of pungent flavors—and pungent prose—will enjoy this mouthwatering grand tour of a culinary treasure.”

5. Being You: A New Science of Consciousness by Anil Seth
(Dutton)

“… neuroscientists are investigating the mysterious quality and trying to answer the hard question of how consciousness arises in the first place. If this all sounds a bit hard going, it’s actually not at all in the masterly hands of Seth, who deftly weaves the philosophical, biological and personal with a lucid clarity and coherence that is thrilling to read … This much-anticipated book lays out his radical theory of our invented reality with accessible and compelling writing … This is still an emerging science and Seth is generous to his fellow navigators, including those with competing theories, as he gently and persuasively walks us through the optical illusions, magic tricks and fascinating experiments that build his case … We perceive ourselves to control ourselves, is Seth’s often counterintuitive but nevertheless convincing argument in this meticulously researched book. However, we are just as importantly the perception of others … an exhilarating book: a vast-ranging, phenomenal achievement that will undoubtedly become a seminal text.” 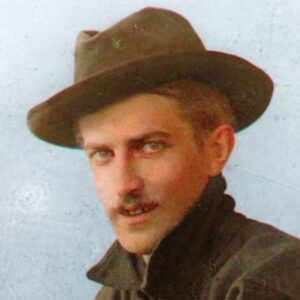 Our menagerie of marvelous reviews this week includes Parul Sehgal on Mark McGurl’s Everything and Less, Molly Young...
© LitHub
Back to top
Loading Comments...