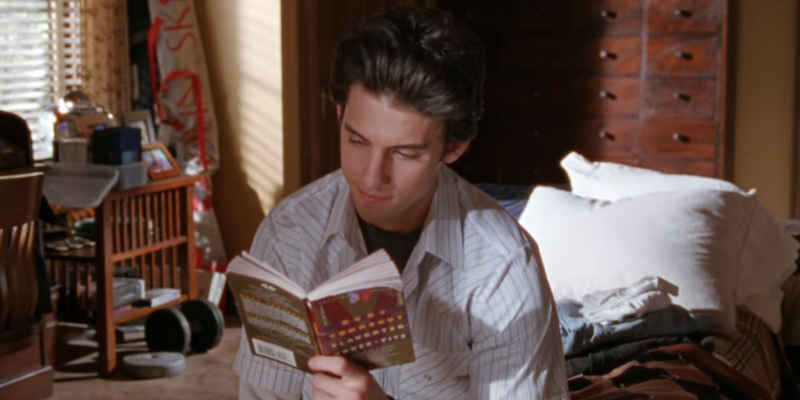 Everyone knows that Jess Mariano was the most alluring boyfriend on Gilmore Girls, no questions asked. And everyone knows that if you were once a 15-year-old bookworm committed to watching Gilmore Girls almost daily, then you would have had a crush on him—and his reading list. But of course, as you get older, you not only see the flaws in your past crushes, you also see some room for improvement in their reading lists. So dear reader, to lighten up this cold and dreary month of January, I come bearing a few book recommendations for Jess Mariano (that you can sift through too!).

Joan Didion, Play It As It Lays

In one of the best repartée moments on the show (and maybe the only acceptable response to a criticism of Hemingway, at least IMHO), Rory suggests Jess read Ayn Rand, and Jess agrees on the condition that Rory gives Hemingway another shot (much to her chagrin.) As a third option, I’d like to throw in Joan Didion’s first novel, Play It As It Lays. Didion had said many times over that she learned the structure and anatomy of a sentence from reading Hemingway. So it comes as no surprise that John Leonard described the novel’s prose as a “razor” through which Didion “car[ries]…her characters out of her perceptions with strokes so swift and economical that each scene ends almost before the reader is aware of it, and yet the characters go on bleeding.” How could a Hemingway-loving Jess not also love a Hemingway-loving Didion?

During their not-quite dating days, we see Jess talking to Rory at Luke’s Diner with a copy of James Joyce’s Ulysses in hand. And sure, it may be a modernist masterpiece. But it was always a little disappointing to me that Virginia Woolf never got a shout-out in Jess’ reading list, especially considering her commitment to experimentation and improvisation. And though many would suggest Woolf’s beloved Mrs. Dalloway as an alternative to Ulysses, I instead recommend The Waves. Similarly preoccupied with time, order, and categorization, The Waves starkly pushes against such restraints to speak and move like the sea. And if Jess loved the attention to minutiae and structural ambition of Joyce’s novel, then I’m sure The Waves will strike him as equally (if not more) detailed and expansive.

In an effort to derail a tutoring session, Jess asks Rory if she has ever read Please Kill Me: The Uncensored Oral History of the Punk Movement. So of course I have to squeeze Kathy Acker and her feminist punk literary legacy in here. In particular, I suggest Acker’s Don Quixote, which follows a woman on a quest to defeat the evils of modern-day America. She intends to do this with “the most insane idea that any woman can think of. Which is to love.” This book is quintessentially Jess in its nomadic, rebellious, and witty ways.

I have a bone to pick with Jess: he hates poetry. His take, and I quote, is, “Jeez, just say it already.” In an effort to curtail such rude dismissal, I am going to recommend Solmaz Sharif’s Look. In this particular episode, Jess is seen reading Vonnegut’s Slaughterhouse-Five at the expense of finishing (or starting, for that matter) a test. Vonnegut’s classic has long been hailed as an anti-war masterpiece, and Sharif’s collection also offers a poignant anti-war critique, as it examines the ways in which violence against people is premeditated and enacted on violence against language. Using the Department of Defense’s Military Dictionary, Sharif examines the heavy legacies and implications of the “War on Terror”—on bodies and on language—making her collection the perfect one to show Jess that poetry isn’t at all about “saying something already,” but letting the implications of how something has been said, how it could have been said, and how it won’t be said simmer and seep through the pages.

When Rory runs into Jess for the first time after their very inconclusive, icy break-up in the Stars Hollow Bookshop, he’s sitting in a corner reading Al Franken’s Lies: And the Lying Liars Who Tell Them—a satirical look into the rhetoric of the right. Though it’s not satire (and I’m still on my poetry mission), I recommend Jess read The Essential June Jordan. Jordan’s body of work has long been celebrated for the political possibilities she offers through her poetry. Her use of language not only offers social and political critique of America (and the wider world), but also imagines new ways of being. And if Jess is curious about how to probe at the rhetoric of the right, then why not also delve into the ways in which language can be used to explore social and political alternatives?

bell hooks, All About Love

Jess begrudgingly starts reading a self-help book titled You’re Not Alone in an effort to work through his lingering feelings for Rory (not to mention the complexities of his familial relationships). Now I can’t comment much on the made-up book Jess finds himself reading, but I can recommend bell hooks’ All About Love as an entry point into thinking deeply, philosophically, and intellectually about love. hooks emphasizes the ways in which love should be conceptualized as a verb, rather than a noun, and explores the necessity and healing elements of love (and the care and compassion that follow) in, as she puts it, an “imperialist white supremacist heteropatriarchy.” And let’s be honest, Jess would rather take hooks’ prose, style, and intellect over the (sorry to say) very cheesy self-help book any day.

During Rory’s Yale-dropout days, Jess pays a visit to tell her that he has written and published a short novel. We never quite learn what the novel is about, aside from the fact that it’s titled The Subsect. Now, I could go ahead and suggest something very Kerouac or Bukowski (both of whom Jess read and loved, and both of whom, I’m sure, influenced his own writing), but that would just be too predictable. So instead, I suggest Fleur Jaeggy’s Water Statues. Illuminating the shadows of broken-down wealth and broken-down family ties, the novel is an exploration of a sprawling kind of loneliness, and an experimentation with form and language, in order to make room for said loneliness. And if I had to bet on what The Subsect explores, I don’t think I’d be far off in saying familial heartbreak, with a hint of formal experimentation, is at the heart of it.