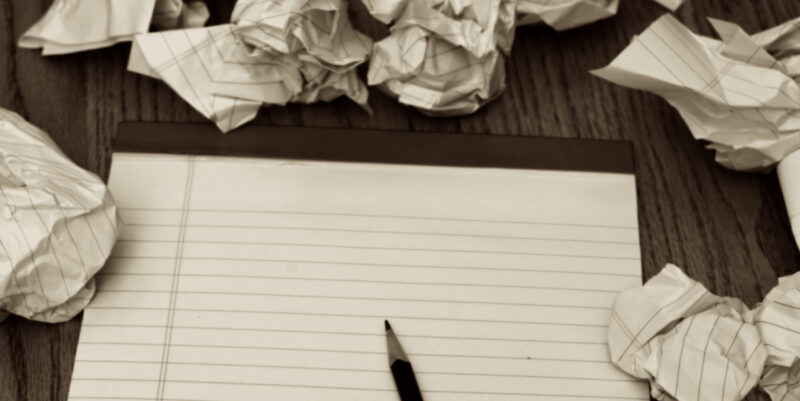 Healing, Then Writing: Confronting Writer’s Block in the Early Years of Sobriety

Matthew Quick Writes “a Love Letter to the Redemptive Forces of Story.”

I had my last drink—a small gin and tonic—on June 8, 2018. My new novel, We Are The Light, isn’t a book about addiction or substance abuse, so what does that final G&T have to do with it?

As I had been using booze to treat my extreme anxiety for a quarter century, sobriety was much harder and less glorious than I had expected. Four-and-a-half-decades’ worth of pain slowly thawed and bubbled up to consciousness. It was awful. At times I wondered if I would survive. I’d get drunk in my dreams at night and then feel guilty when I woke up. I got angry with people. I hated myself.

Without the nightly escape into the bottle, this introvert alternately holed up in his house and ran in the woods while he very slowly acclimated. Many of the activities I once thought I enjoyed—watching sports, playing card games, going out to dinner, attending parties—were no longer tolerable. Some were even painful.

Since childhood, I’ve used writing to soothe my anxiety and depression, so, of course, my big prize for getting sober was crippling writer’s block, which grabbed me by the throat and filled me with a sense of doom.

But I certainly didn’t believe in writer’s block.

I had previously planned and very much wanted to write a novel about a historic movie house healing a small community after a horrific tragedy. The idea first came to me in 2014, while drinking whiskey with wonderfully supportive librarians after an event I did at the gorgeous Ambler Theater in Pennsylvania. Something deep inside had always felt like my movie-house novel could be my best yet, but no matter how hard I tried, I hadn’t previously been able to find a way into the story. I couldn’t get the opening right.

Now was the time, I told myself shortly after that last G&T. I wouldn’t quit until I figured out the story, no matter how long it took. Then I got to work.

Every day during the early years of my sobriety I dutifully sat down at my laptop and typed for hours, but I felt nothing. I couldn’t connect with my characters. No matter how hard I tried, I couldn’t feel the narrative forming. I wrote hundreds of false starts, each deader than the previous attempt. I tried outlining, which, as an intuitive creative, I never do. I went for long walks and attempted to mentally wring out the narrative arc, as if my brain were a sponge, which only produced dizzying migraines. I consulted other writers, who were quick to offer support and sympathy, but could do little more. Nothing was working.

Sometimes I’d bring my awful need to my wife—who is also a novelist—and read my work aloud. I’d desperately sell the text, compensating with an overly dramatic reading voice. Even though Alicia was encouraging, her eyes never lied. They just didn’t light up like they do when my work is good.

What had once been as easy as breathing was suddenly impossible. I didn’t believe in writer’s block, but writer’s block sure believed in me. It was a nightmare that wouldn’t end. As dramatic as this might sound, I felt like I was suffocating, dying—and a part of me really was. I felt emasculated. The shame was unbearable and ultimately forced me to seek help in the form of Jungian analysis.

Since childhood, I’ve used writing to soothe my anxiety and depression, so, of course, my big prize for getting sober was crippling writer’s block, which grabbed me by the throat and filled me with a sense of doom.

“Stop trying to write,” my analyst said, but I ignored his wise counsel and my pain intensified. I continued the pigheaded war with my laptop until my psychological reserves were thoroughly exhausted, at which point I finally ceased typing. Then I did little more than attend analysis a few hours a week, run obsessively, read Jungian-related texts in a desperate attempt to find out what was “wrong with me,” record dreams, and shell my better half with hypotheses on why I could no longer write. I felt like my psyche was imploding.

If there was an academy that gave out an annual award for best supporting wife, I would nominate Alicia Bessette.

And a few of my friends also helped in deceptively simple ways. My best local buddy Matt and I started having lunch once a week and talking about our lives candidly. My friend Kent and I launched a long-distance movie club during the pandemic. Weekly, we took turns selecting films—mostly hidden gems from the past. Post-viewing, we’d trade thoughts via phone for hours.

On Sundays, I started swimming in the ocean and playing kubb on the beach with my friend Adam and the aforementioned Matt. My brother, Micah, and I talked—and still talk—at length on the phone every Saturday morning. A strange coincidence put me in touch with the writer Nickolas Butler and we began scheduling monthly conversations about writing, publishing, and what it means to be a man in America these days. Fortified by my small successes, I began reaching out via email and reconnecting with others from my past. In this way, I clumsily cobbled together a small support group of (mostly) men around me to complement the assistance that my wife was so heroically providing.

Through the analytic process, I also bonded with my paternal analyst in ways I hadn’t previously known were possible and—while I began to very slowly heal, working through all of my many complexes—I started to feel a dependency fiercer than I had ever known before. I seriously worried about my analyst’s well-being. What would happen to me if he suddenly disappeared before we finished our work? I didn’t think I would survive that. A new paranoia set in.

Sometimes my dependency would make me angry and at these times I’d demand to know when I would be able to write again. My analyst would shrug and say something like, “If you were ready to write, you’d be writing. You’re not in control of this. Let go.” My bullish pride fought against that logic. It took a long time for me to admit that I couldn’t will myself through my writer’s block. I didn’t want to believe that submission was required, but once I truly yielded—when I focused exclusively on healing for healing’s sake—We Are the Light appeared clearly in my mind’s eye.

After typing dead prose for almost five years, a flood of words gushed out of me—teeming with life. Bona fide euphoria. I was in a trance, channeling the very story I was meant to tell all along. This time the writing experience felt better than any high I have ever known. After a month and a half of furiously working alone in my office, I emerged with a rough draft that lit up Alicia’s eyes. She finished it with tears streaming down her face and a great need to hug me for a long time. The creative part of me could finally breathe again.

After typing dead prose for almost five years, a flood of words gushed out of me—teeming with life. Bona fide euphoria. I was in a trance, channeling the very story I was meant to tell all along.

My protagonist, Lucas Goodgame, doesn’t have a substance abuse problem. But when tragedy strikes, Lucas is humbled. In an attempt to reclaim his talents and start moving forward again, he’s also forced to confront his past traumas. Lucas loves his wife dearly. His male friendships are mutually medicinal. He has a complicated relationship with the numinous. He greatly benefits from Jungian analysis. And he’s trying hard to reorient to the feminine in a positive way. He is not my alter ego, but I do think of him as a fictional brother. I love him very much.

We Are the Light is about the miraculous and transformational power of art. It’s about our psyches’ ability to save us in strange yet glorious ways. It underscores the need for apolitical spaces, community and true inclusiveness in this increasingly polarized world. It encourages us to frame uncomfortable realities in ways that benefit all of us. It demonstrates how we can transcend our own egos to make life-changing differences in the lives of others. Finally, it is my love letter to the redemptive forces of story.

Story, after all, is what saved me. Writer’s block was my soul’s way of forcing me to surrender to a narrative shift. I was no longer the writer who drank every night in order to deny the hurts that were showing up on the page year after year. I was the writer who reluctantly took some time off to prioritize mental health and has come back with a stronger sense of self and a clearer vision for the future.

I hope you will be moved and entertained by We Are The Light. I also hope you will be buoyed and maybe even inspired. Loving my wife, my friends, my family, and even my analyst—plus allowing them to love me too—saved me and produced this novel. Our psyches are built to love. That’s what I’ve learned over the past few years. 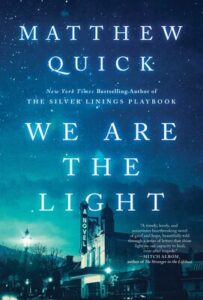 We Are the Light by Matthew Quick is available now via Avid Reader Press.

Matthew Quick is the New York Times bestselling author of The Silver Linings Playbook, which was made into an Oscar-winning film; The Good Luck of Right Now; Love May Fail; The Reason You’re Alive; We Are the Light; and four young adult novels. His work has been translated into more than thirty languages, received a PEN/Hemingway Award Honorable Mention, was a Los Angeles Times Book Prize finalist, a New York Times Book Review Editors’ Choice, and more. The Hollywood Reporter has named him one of Hollywood’s 25 Most Powerful Authors. Matthew lives with his wife, the novelist Alicia Bessette, on North Carolina’s Outer Banks. 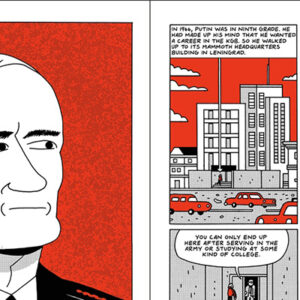