My name is Greta Thunberg, I am 16 years old and I’m from Sweden. I am grateful for being with you here in the USA. A nation that, to many people, is the country of dreams. I also have a dream.

That governments, political parties and corporations grasp the urgency of the climate and ecological crisis and come together despite their differences—as you would in an emergency—and take the measures required to safeguard the conditions for a dignified life for everybody on earth. Because then we millions of school-striking youth could go back to school.

I have a dream that the people in power, as well as the media, start treating this crisis like the existential emergency it is. So that I could go home to my sister and my dogs. Because I miss them.

In fact I have many dreams. But this is the year 2019. This is not the time and place for dreams. This is the time to wake up. This is the moment in history when we need to be wide awake.

And yes, we need dreams, we cannot live without dreams. But there’s a time and place for everything. And dreams cannot stand in the way of telling it like it is.

And yet, wherever I go I seem to be surrounded by fairy tales. Business leaders, elected officials all across the political spectrum spending their time making up and telling bedtime stories that soothe us, that make us go back to sleep. These are feel-good stories about how we are going to fix everything. How wonderful everything is going to be when we have solved everything. But the problem we are facing is not that we lack the ability to dream, or to imagine a better world. The problem now is that we need to wake up. It’s time to face the reality, the facts, the science.

And the science doesn’t mainly speak of “great opportunities to create the society we always wanted.” It tells of unspoken human sufferings, which will get worse and worse the longer we delay action—unless we start to act now. And yes, of course a sustainable transformed world will include lots of new benefits. But you have to understand. This is not primarily an opportunity to create new green jobs, new businesses or green economic growth. This is above all an emergency, and not just any emergency. This is the biggest crisis humanity has ever faced.

And we need to treat it accordingly. So that people can understand and grasp the urgency. Because you cannot solve a crisis without treating it as one. Stop telling people that everything will be fine when in fact, as it looks now, it won’t be very “fine.” This is not something you can package and sell or “like” on social media.

The USA is the biggest carbon polluter in history. It is also the world’s number one producer of oil.

Stop pretending that you, your business idea, your political party or plan will solve everything. We must realize that we don’t have all the solutions yet. Far from it. Unless those solutions mean that we simply stop doing certain things.

Changing one disastrous energy source for a slightly less disastrous one is not progress.

Creative accounting will not help us. In fact, it’s the very heart of the problem.

And these current, best available scientific calculations do not include non-linear tipping points as well as most unforeseen feedback loops like the extremely powerful methane gas escaping from rapidly thawing Arctic permafrost. Or already locked-in warming hidden by toxic air pollution. Or the aspect of equity, climate justice.

So a 50 percent chance—a statistical flip of a coin—will most definitely not be enough. That would be impossible to morally defend.

Would any one of you step onto a plane if you knew it had more than a 50 percent chance of crashing?

More to the point: would you put your children on that flight?

And why is it so important to stay below the 1.5°C limit? Because that is what the united science calls for, to avoid destabilizing the climate, so that we stay clear of setting off an irreversible chain reaction beyond human control. Even at 1°C of warming we are seeing an unacceptable loss of life and livelihoods.

So where do we begin?

Well, I would suggest that we start looking at chapter 2, on page 108 of the SR15 IPCC report that came out last year.

Right there it says that if we are to have a 67 percent chance of limiting the global temperature rise to below 1.5°C, we had, on 1 January 2018, about 420 gigatonnes of CO2 left to emit in that carbon-dioxide budget. And of course that number is much lower today. As we emit about 42 gigatonnes of CO2 every year, if you include land use.

With today’s emission levels, that remaining budget is gone within less than 8.5 years.

These numbers are not my opinions. They aren’t anyone’s opinions or political views. This is the current best available science. Though a great number of scientists suggest even these figures are too moderate, these are the ones that have been accepted by all nations through the IPCC.

And please note that these figures are global and therefore do not say anything about the aspect of equity, clearly stated throughout the Paris Agreement. Which is absolutely necessary to make it work on a global scale. That means that richer countries need to do their fair share and get down to zero emissions much faster, so that people in poorer countries can heighten their standard of living, by building some of the infrastructure that we have already built. Such as roads, hospitals, schools, clean drinking water and electricity.

The USA is the biggest carbon polluter in history. It is also the world’s number one producer of oil. And yet, you are also the only nation in the world that has signaled your strong intention to leave the Paris Agreement. Because, quote, “It was a bad deal for the USA.”

Four hundred and twenty gigatonnes of CO2 left to emit on 1 January 2018 to have a 67 percent chance of staying below a 1.5°C global temperature rise.

Now that figure is already down to less than 360 gigatonnes.

These numbers are very uncomfortable. But people have the right to know. And the vast majority of us have no idea these numbers even exist. In fact not even the journalists that I meet seem to know that they even exist.

Not to mention the politicians.

And yet they all seem so certain that their political plan will solve the entire crisis.

But how can we solve a problem that we don’t even fully understand? How can we leave out the full picture and the current best available science?

I believe there is a huge danger in doing so. And no matter how political the background to this crisis may be, we must not allow this to continue to be a partisan political question. The climate and ecological crisis is beyond party politics. And our main enemy right now is not our political opponents. Our main enemy now is physics. And we cannot make “deals” with physics.

Everybody says that making sacrifices for the survival of the biosphere—and to secure the living conditions for future and present generations—is an impossible thing to do.

Americans have indeed made great sacrifices to overcome terrible odds before.

Think of the brave soldiers that rushed ashore in that first wave on Omaha Beach on D-Day.

Think of Martin Luther King and the 600 other civil rights leaders who risked everything to march from Selma to Montgomery.

Perhaps it is impossible.

But looking at those numbers—looking at the current best available science signed by every nation—then I think that is precisely what we are up against.

But you must not spend all of your time dreaming, or see this as some political fight to win.

And you must not gamble your children’s future on the flip of a coin.

Instead, you must unite behind the science. You must take action.

You must do the impossible.

Because giving up can never ever be an option. 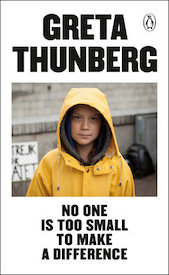 Greta Thunberg was born in 2003. In August 2018 she started a school strike that became a movement called Fridays For Future, which has inspired school strikes for climate action in more than 150 countries involving millions of students. Thunberg has spoken at climate rallies across Europe, and at the United Nations COP24 in Poland and the World Economic Forum in Davos. In September 2019 she will speak in New York City at the UN Climate Action Summit. She has won the prestigious Prix Liberté and been nominated for a Nobel Peace Prize. Thunberg is vegan, and doesn’t fly, in order to live a low-carbon life.

Elizabeth Bishop in Key West, Island of Her Dreams 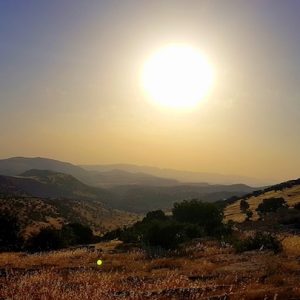 Coming of age as a Kurdish girl in Iran, I learned early on that my being alive was an act of subversion. I belong to a people...
© LitHub
Back to top
Loading Comments...