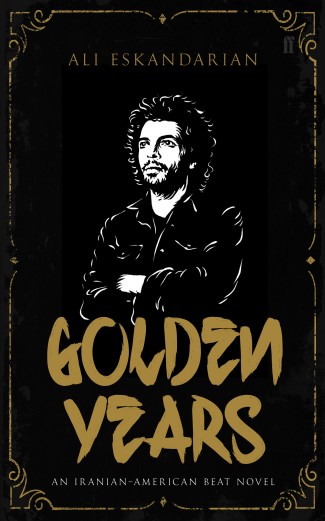 The following is from Ali Eskandarian’s novel, Golden Years. Eskandarian grew up in Tehran, during the Iranian Revolution, where he found strength in music and the arts. He has been living in New York since 2003. His debut album, Nothing to Say, was released on Judy Collins’ Wildflower Records. He has toured the States several times including as opener for Peter Murphy (Bauhaus) and with fellow Iranians The Yellow Dogs.

Inﬁnite wisdom hidden below and above or not hidden at all but smiling and waving, beckoning. We were never hungry growing up, that much is true. I didn’t know real hunger until I struck out on my own. There was real romance in it at ﬁrst. So many great artists have gone hungry. Fasting, they told us in school back in Iran, is a sort of conduit to the reality of the poor. One ﬁnds out only too soon, however, how devoid of romance involuntary hunger really is! It makes no sense to walk around a city like New York, amongst so many restaurants and eateries, with an empty stomach and a mind full of dread. A person should be able to walk up to any food vendor and ask politely for anything on the menu. Anything one wishes to eat should be given gratis.

Was that a good enough joke for ya? Have a hearty laugh at that one, friend, and don’t worry, there’ll be plenty more where that came from, I promise. A person tells you a story and you either listen or you don’t but whatever conclusions you arrive at are your own. It’s all fragments, never the whole truth.

If I ever get my hands on a substantial amount of money I’ll feed this city block by block for free for days. There’ll be signs posted all over town: Hungry? Show up to such-and-such a place at this time for a free meal and a few songs. There’ll be free medical checkups too. If we need to be disguised under the banner of some kind of a city government organization then so be it, for the authorities will surely get worried and wonder what the hell we’re up to.

We won’t talk to any reporters and will not allow any to inﬁltrate our ranks with their dirty mind/body/ spirits. Our story will not be for sale either. Our deeds will live on in the hearts of women, children, and men. We’ll require no publicity beyond word of mouth. TV newsmen? Ha! Please do us a favor and not even bother, we don’t care about your opinions so leave us be. There’ll be no dubious interviews while people wave to the cameras in the background. We’ll only talk to those who understand. The rest can read our books and listen to our songs. Let them make up their own tales and spin them any which way they want to, with commercial breaks in between.

From us there will be no manifestos, no ten pillars of our cause, no constitutions, no commandments, no laws or codes of conduct. The atmosphere will be one of joy and peaceful harmony, a serene quiet harmony. Just words and melodies, transpicuous to some, yet utterly discordant to others.

The books are free if you’ve got reverence for the moment, otherwise you’ve got to pay, pal! That’s right, in cold hard cash too. Or you can give your shoes to that man over there, that’s right, trade and barter like the days of yore. Who are we? Why, same as you, mister, we’re human beings and we care for the well-being of our fellow human beings. We know, as surely you must too, that people are hungry both in their hearts and in their bellies. So we decided to take the easy way out and ﬁll up their bellies. The rest will have to wait for now.

Oh how glorious it would be to feed thousands of people in the middle of this big bad city. To stop and divert the trafﬁc like the NYPD does anytime there’s some useless politician in town or a stale parade is commencing. Why not stop it to break bread? There’ll be no bullhorns or loudspeakers, no yelling at the top of the lungs, and no electriﬁed instruments of any kind for the many musicians. If you can’t sing or play for small pockets of the crowd or verbalize necessary instructions without the aid of synthetic ampliﬁcation then you do not work for us. May no harm come to you, friend, but we do not require your services. Feel free to stay and eat though. Yes, stay and enjoy yourself. The meals will of course be vegetarian, locally grown, and transported using bicycles.

Why not? It will be a tremendous undertaking. Let the rich and shameless have their banquets. This will be ours. Every crazy idea is welcomed by our staff, who will be handpicked by me and paid handsomely for their efforts. This won’t just be food. This will  be a bounty, a precious bounty, blessed by holy men and women. The cuisine shall reﬂect the multinational tastes of the city. Dozens of varied prayers will be said before we feast, but again not using bullhorns for there will be no bulls in sight, only us humans. It should be easy enough to accomplish, wouldn’t you say?

One of the upstairs neighbors is visiting us and talking about art. He used to be a big shot back in the nineties, came up with some way to exploit people in the digital age and got himself some notoriety. He housed people in a building and made sure all privacy was taken away from them. His ideas are all capitalist although he considers himself an artist.

He was blabbing on like that for a while and none of the kids or their manager had the balls to retort. I ﬁnally had to.

‘I’m sorry, but what does that have to do with music?’ I asked him.

From GOLDEN YEARS. Used with permission of Faber & Faber. Copyright © 2016 by Ali Eskandarian.

On the Morning After, and Moving from Mourning to Hope 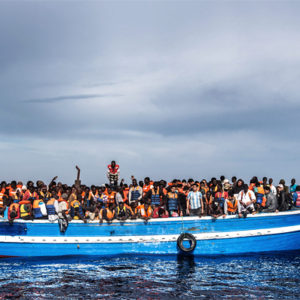 On The Violent Language of the Refugee Crisis let me declare doorways, corners, pursuit, let me say standing here in eyelashes, in invisible breasts, in the shrinking...
© LitHub
Back to top