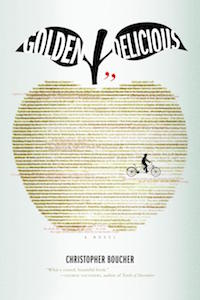 The following is from Christopher Boucher’s novel, Golden Delicious. Christopher Boucher teaches writing and literature at Boston College, and is the managing editor of Post Road Magazine. He is the author of How to Keep Your Volkswagen Alive and lives with his wife and two children in Newton, MA.

That afternoon I took the Reader to see the Memory of Johnny Appleseed. We left right after school on my customized Bicycle Built for Two, the Reader on the backseat and me on the front. We pedaled through the paragraphs of downtown and across Highway Five to the deadgroves near the west margin, where I figured we’d find the Memory planting stories in the soil.

That was the year that my Mom left us—sharpened the blades in her skirt, winged up her blouse, and flew off—and it was just me, my father and my sister in our home in Appleseed. It wasn’t a surprise when she left; she’d been planning to leave, telling us she was leaving, for months. And everything else that she’d predicted had come true—the blight, the loss of meaning, all of it.

Even so, we were shocked when she actually went through with it. There was no official goodbye, no pep talk. My sister and I were in the TV room that afternoon when my Mom appeared in the doorway, wearing her flightskirt and goggles, a suitcase at her feet. “Well, I’m all packed,” she said.

My sister looked over at her from the couch. I pulled my headphones off.

“I’ll see you both soon, OK?” my Mom said. Then she saluted us and walked out the door and into the backyard.

My sister and I ran out after her. “Wait—right now?” said Briana.

My Mom lowered her goggles over her eyes and lifted off the ground.

My Mom didn’t answer—it was like she couldn’t even hear Briana.

“What about dinner?” my sister shouted up.

“Who’s going to do the grocery shopping?”

My Mom huffed. By then she was twenty feet high—then thirty, then forty.

I didn’t say anything. I was pretty sure that this was my fault—that I was the reason my Mom was leaving. I’d done something wrong, but I didn’t know what.

I was sad watching her go, though, and I missed her in the days that followed. I missed the obvious things—our trips to the Library and to the Bing for movie matinees—but also the things I never thought I’d miss: the sound of her footsteps as she vaulted up the carpeted stairs two at a time; the way she leaned over the kitchen counter while smoking a six-foot cigarette; the sound of her working out—practicing martial-arts moves in the worryfields, hitting the heavy bag in the garage, perfecting flight techniques out back. The house felt empty without my parents’ arguments—their subtle barbs, their all-out shoutfests. I even missed being yelled at—the way my Mom spat out the words spoiled and selfish, and, more recently, brat and blabbermouth and badseed, and in the days before she left, piece of crap, and piece of shit. I was all of those things—I was a spoiled, selfish piece of shit. I ruined everything. That was probably why I didn’t have many friends—why I rode my Bicycle Built for Two alone.

Then, a few weeks after my Mom flew away, Mr. Santos assigned us—you and I—a project in History about the founding of Appleseed. I told you maybe we could go see the Memory of Johnny Appleseed and interview him, and you looked at me funny and said, “I thought Johnny Appleseed was a myth.”

I considered that. “I don’t think so,” I said. “His Memory works with my Dad sometimes.”

“And he knows about the founding of Appleseed?” said the Reader.

“Sure,” I said. “He planted, like, every apple tree in Appleseed. I think that’s why they call it—”

“Does he know what happened to them?” asked the Reader.

You—the Reader—shrugged. “I’ll go with you,” you said, “if you’re sure you know where to find him.”

“He doesn’t technically have an address?” I said. “But I can usually track him down.”

Truth was, I wasn’t sure I could find the Memory of Johnny Appleseed by myself. Usually he found me. I’d been on dozens of drives with my Dad, though, when he was trying to locate the Memory for one job or another. Sometimes we spotted him hitchhiking on Old Five; othertimes he was riding his treecycle past Wolf Swamp or standing outside the Big Why, handing out brochures. Once we spotted him turning cartwheels on the Town Green. The last time we needed him, we asked at the Recycling Center and they said they heard he was up on Appleseed Mountain. When we got to the base of the mountain, we saw Johnny Appleseed walking through the trees with an armful of ifs.

There were also those times, though, when we didn’t find him at all—when my Dad drove around for an hour or two, pounded the dashboard with the heel of his hand, turned the truck around and went home.

The Reader and I pedaled past the Amphitheatre, the Arcade, the Library—there was no sign of Johnny anywhere. Soon, we’d crossed the off-white pages of Highway Five, bumping over prints and railroad tracks. In the distance you could see Appleseed Prison, the Mental Hospital, and back behind that, the beard of Appleseed Mountain. It was a tough ride, what with the extra weight of the Reader and all, and out past Jonquil I had to stop and catch my breath. At one point I turned around and looked back at you. “Are you pedaling?” I said.

“Of course I am,” said the Reader.

I stood up from the seat and bore down on the pedals.

Finally I saw Old Colton Road, and, up ahead, the Colton deadgroves. When we reached the edge of the groves we laid the bike down in the grass and walked through the fields. My thoughts were clamoring; I leaned over, opened the top of my head, and let the thoughts spill out and run free on the dead pages. “Woo!” shouted one of my thoughts, sprinting forward. Another thought began digging.

“Don’t get lost!” I shouted to them. “And think right back here if you find the Memory of Johnny Appleseed.”

“Go over there by that tree,” I told it.

The Reader looked out across the page. “Should we shout for him or something?” she said.

“Shouting won’t do much good,” I said. “These groves go on for years.”

We trudged across the marshy ground. We saw some memories and scenes; a few wild sentences crossed behind a treeline. Soon I spotted a figure in the foggy fields; he wore a satchel around his waist and he was kneeling in the soil. When he heard our footsteps approaching, he stood up and put his hand to his forehead. “_____?” he said.

The Memory of Johnny Appleseed didn’t look good. He was wearing jeans that were too big for him, a green corduroy hat and someone’s old Converse hi-tops. His white beard was patchy and his eyes were tired. “Who’s this?” he said.

“I can see that,” he said. He smiled a near-toothless smile. His face was stained with ink and soil. “What’s she doing here?”

“About the founding of Appleseed,” said the Reader quietly.

In the distance, two of my thoughts ran past, one chasing the other with a tree branch.

“We were hoping we could interview you for it,” I said.

“What do you want to know?” said the Memory.

“About the first pages,” I said. “The planting of the first apple trees.”

The Memory stood up. “Sure,” he said. “I can go through it for you. How ’bout you help me with what I was doing—pulling out these stalks?” he said, leaning over. “And then I’ll give you the history.”

I looked out at the field. Five or six rows of black, spiny clumps stuck out from the ground. I could see the Reader studying the stalks. “What are you growing here?” you asked.

“Only thing that will grow in the deadgroves,” said Johnny Appleseed. “Those are stories.”

“I didn’t think anything could grow in the deadgroves,” the Reader said.

“Stories will grow anywhere,” the Memory told the Reader. “You can grow stories on the bottom of the ocean floor! In a tree. On the back of a song! These rows,” said the Memory, “are overripe. They need to be told today. So how ’bout it?”

I looked to the Reader, who nodded.

The Memory positioned himself over a stalk. “This inky part here? You grab it and pull.” He pulled, and up came a story. We looked at it; it was the story of Cora Morris, one of the first Mothers.

“See? There’s some history right there,” said the Memory of Johnny Appleseed. “Now you guys give it a try.”

I knew I didn’t have a choice about the stories we were harvesting: they were already fully formed. But if I’d had a choice? I would have grown more of the small, dumb stories that I’d lived and lost: family of four goes out to Appleseed Pizza for an extra-large pie. Family of four has enough meaning to pay the mortgage. Family of four never has to worry about bookworms, meaning-losses or blights. There were never any problems and nothing bad ever happened. Were those even stories? Anyway, that’s what I wanted.

The Reader and I leaned down and took hold of a storyroot. We pulled, but the root held firm.

“Oh, come on,” said the Memory of Johnny Appleseed. “Pull! With your arms!”

We tried again—you put your back into it; I dug my feet into the fibers. The root finally budged, and loosened, and gave. Together, we pulled the story out of the page.

From GOLDEN DELICIOUS. Used with permission of Melville House. Copyright © 2016 by Christopher Boucher. 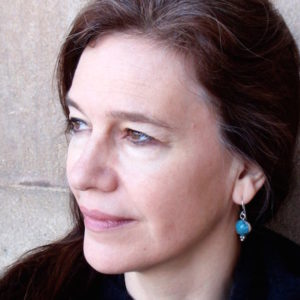 Louise Erdrich: 5 Books In My Life Louise Erdrich's latest novel, LaRose, is available now from Harper. What was the first book you fell in love with? I...
© LitHub
Back to top