From such swarms a human face emerges—streaked with sweat, with tears, with blood, with spit, with the last bites, murmuring the last rites over bodies in the desert, bodies at sea, lives de-railed and thrown into desperate straits, swallowing to maintain some dignity in the face of cold indifference, in the face of countless reasons, rationales, contortionist excuses and justifications for why, for no, for not now, for never, though you bear the face of the world, and have been forced through the crooked and molten pressures of the world to tunnel, to run, to climb, and crawl while carrying your children on your back, while asking your ancestors’ forgiveness and assistance in burning your whole being into an arrow that might, with one deft move be shot, through the narrowest of openings, toward the people standing at the checkpoints, the people standing on shore, the people watching and reading about you through screens, the people who seem not to know, who insist on your indecipherability, though how can you, bearing the face of the world, make it any more plain: the line between life and death is fine as filament and drawn, grasped, or smashed—by human hands.

lê thi diem thúy was born in 1972 in South Vietnam and left the country on a boat with her father in 1978. She grew up in Linda Vista, San Diego, Southern California and in 1993 traveled to Paris to research French colonial picture postcards made in the early 1900s. A writer and a performance artist, she is the author of the novel The Gangster We Are All Looking For.
Share: 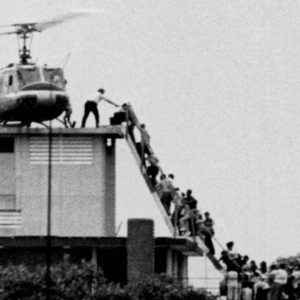 American Stories Are Refugee Stories For most of my life, I could pretend I was not a refugee. I grew up in the Midwest, in a mostly-white town in the 1980s,...
© LitHub
Back to top