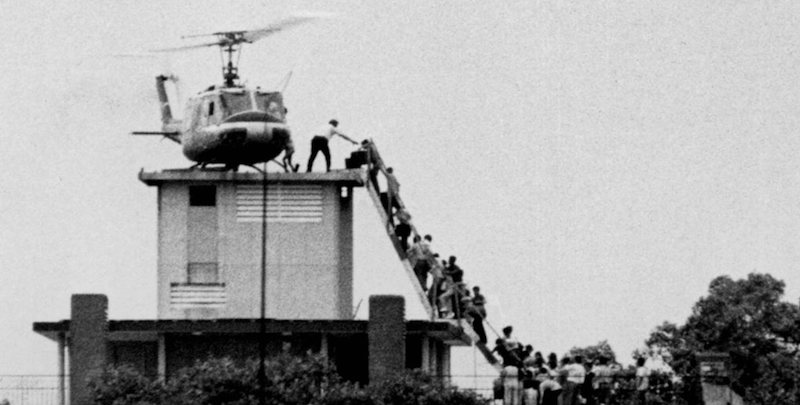 Bich Nguyen Contemplates the Fall of Saigon, and Everything After

For most of my life, I could pretend I was not a refugee. I grew up in the Midwest, in a mostly-white town in the 1980s, and back then the idea was to forget the past and move along. Stay out of trouble. Don’t talk about the war. Don’t react to racist taunts. Behave well enough not to get noticed. And that’s what I did. But every April, I remembered. My family had left Saigon on April 29, 1975, the day before the fall of the city and the end of the war. I was a baby, carried by my father and uncles and grandmother, brought by motorcycle, boat, ship, and airplane to refugee camps and eventually the United States, and given an American childhood. I grew up with sitcoms and suburbs, crosswalks and sugar cones. No one in my family wanted to talk about the leaving. Still, every April, I tried to imagine what had happened, how we had fled in the night without knowing where we would end up or if we would even make it. I knew that this was a gift: to have not the experience, but the imagining.

Refugees don’t quite fit in to the romantic immigrant narrative in America. Their arrival is less about opportunity and more about survival. Refugees are a more obvious, uncomfortable reminder of war and loss. But America is ruthless to newcomers. Refugees—those who are even allowed in this country at all—are expected to become relatively self-sufficient in eight months. They are supposed to pay back the cost of travel to get to the United States. And they are expected to be absolutely grateful.

I watched my father and uncles and grandmother struggle with English, struggle with the strange habits of Americans. Always there was a sense of not knowing how things were supposed to be done. Who would even think to tell us? In your first experience of winter and snow, how would you know what to do with an iced-over windshield? In a pre-internet world, how would you know there was a thing called a scraper? What if you threw boiling water on the car, thinking this would surely melt the ice, having no idea the glass would explode? What if in trying to navigate this new cold world you tried to ask questions at stores but people just stared and said, I can’t understand you. Speak up. Speak English. What if people told you, go back to where you came from, as if you could?

Growing up, I was afraid all the time. It was a low-lying fear that I couldn’t explain to myself or dare admit out loud. It kept me awake at night, made me feel both too visible and invisible. I think now that I was afraid of all that my family didn’t know about American life—how far from being settled or self-sufficient we actually were. It’s why I learned to read early and copied inflected dialogue from TV shows. I memorized words, perfected my English. I tried to live in libraries. In school, I watched and learned whatever my white friends did. What they wore. What they brought for lunch. Their idioms and slang. I could be almost just like them, so long as I avoided the mirror and used powerful forms of denial whenever I was in my Vietnamese home. I thought I could transcend my origins, as if I were never a refugee, as if I were American-born, as I sometimes pretended to be. As if that would keep me safe.

“What if people told you, go back to where you came from, as if you could?”

My father has a photograph of him in Saigon, leaning against his prized Yamaha motorcycle. He is so young—he was 28 when we left Vietnam—his hair full and wavy. His smile is a gambler’s smile. Later, that motorcycle would get us from our house to the Saigon River, where we found passage on a boat that found its way to a US naval ship on the sea. My father had abandoned the motorcycle, of course, leaving it on the riverbank with the key because someone else would need it.

April 30th marks the anniversary of the fall of Saigon, when North Vietnamese forces took over the city and crashed tanks through the gates of the presidential palace. Fall is always the word people use, and whenever I heard that, growing up, I imagined bodies and buildings in slow-motion collapse. I still imagine it, because I cannot really know it. Not that day, nor the day before it—the chaos and darkness, families deciding to leave because there was no other choice.

Gallup polls from 1975 show that most Americans were not in favor of Vietnamese resettlement. Maybe this is why, for most of my life, the word refugee has seemed suffused with shame. The only narratives I saw about the Vietnam war came from white people and their movies. Their gaze, their versions, made the story that most Americans knew. And in this current era of increased xenophobia, with an administration that refuses to help people who need help the most, refugees are still a source of suspicion and resentment. Why help them when we could help US citizens?

The message to refugees and immigrants is a demand for value: prove that you belong here, prove that you have any right to exist here. And while you’re doing so, stay quiet and don’t make a fuss. If refugees are lauded it’s for what they might accomplish: look at those who became doctors, scientists, inventors. The good refugee is invariably described as gracious, which is to say grateful.

It’s nearly impossible not to absorb these demands, or at least feel the weight of them. For most of my life I have behaved accordingly, well enough that I could pretend I wasn’t a refugee at all. Because I was afraid and because I thought I would be safer. But silence has never been a protection. And increasingly, there is no safety.

When I say I am a refugee, a daughter and granddaughter of refugees, I mean I carry my family’s story with me. My father and uncles fought in the war and lost; we left; we didn’t know where we would end up. I mean, I am an American citizen not by birth but by need. I took the tests and paid the fees. And every April my father and uncles remember 1975 and I try to imagine. I look at that photo of my father with his motorcycle and am astonished by how far it has traveled, intact, across so much water and land. It is an artifact. Like our bodies and our faces, it is proof of our history and of how we got here.

Bich Minh Nguyen, who also goes by Beth, is the author of three books, all with Viking Penguin: the memoir Stealing Buddha’s Dinner, which received the PEN/Jerard Award, the novel Short Girls, which received an American Book Award, and most recently the novel Pioneer Girl. Nguyen was born in Saigon and grew up in Michigan, where her family settled after leaving Vietnam as refugees. She now lives in the Bay Area, where she directs the MFA in Writing Program at the University of San Francisco. 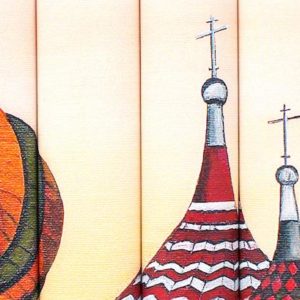 Russian Literature Week 2017 will take place starting today through May 6th at literary venues across New York City including...
© LitHub
Back to top