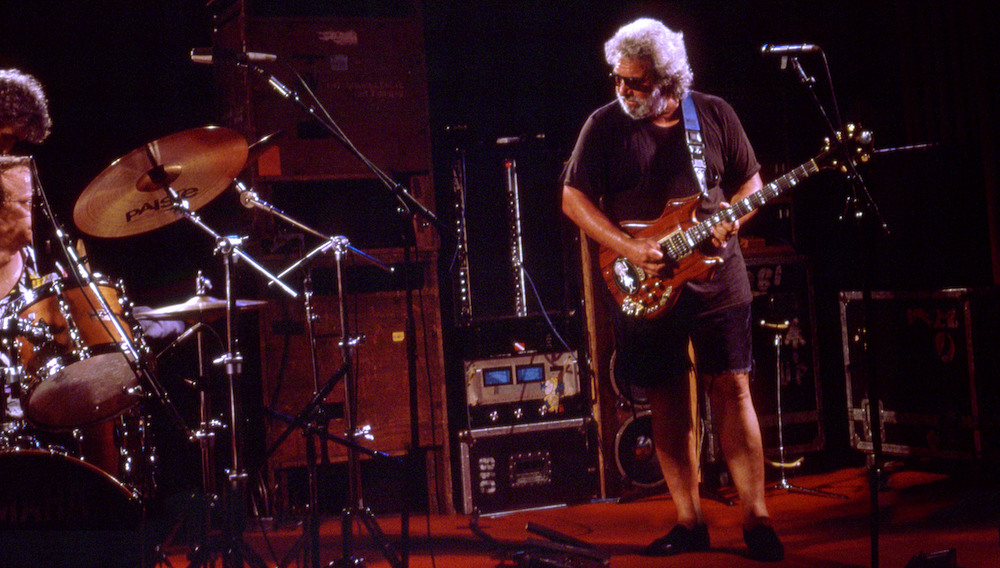 Fresh Updates on the Dead: On Jerry Garcia’s Current Status in the Spirit Realm

I’m watching Jerry at Shoreline, September 1, 1990, when my partner walks into the room and stops and gives her report from the road circa that era; what we didn’t know then, she is saying, is that Jerry was dying in real time before hundreds of thousands of us. And we can so plainly see it now. Just look at his face.

He looks terrible. He’s been wearing and will continue to wear more or less the same 3XL black t-shirt until his death on August 9th, 1995; it’s a tunic of sorrow. Here is a patina of sweat on his brow that’s somehow different from regular healthy show sweat, he’s clammy, in the realm of the unwell; and there is profound melancholy in his eyes, you see it even as it’s hidden under his trademark big shades, even in the show’s most jubilant moments.

But what he’s doing is exquisite. His voice is fine, and if it isn’t hearty, it’s sturdy; and his playing is reaching down into a messy soul and plucking the stray strands of joy in every last place he can find them. And though it’s impossible to really, truly, clearly explain how, you can’t help but get the feeling sometimes that even in this show, in what was just one more night on the road, he is playing for us now, that this music is currently ringing out, that he played it then so we can hear it now.

The man from the Dead is trying to speak to those of us in the now. He has breaking news. Today the news is this: How sweet it is to be loved by you!

Somehow the Grateful Dead have news for us still every summer—tour dates with extant members and collaborators, reissues, merch—but it’s been a while since we have had an update on Jerry. Jerry is dead, of course, but just like the rest of us, Jerry has been going through some heavy changes, too.

In a 4K restoration on a YouTube fan account, is Jerry the vessel for a type of male pain that’s running at an all-time high right now? I look at Jerry, and I see several men I have known who have passed in the last few years. At various points in this gorgeous, rippin’ solo, they’re all waving hi, asking me if I feel like getting high. Kevin, my brother, you know I do.

When I was a kid, I wanted there to be re-runs of the news—that on say, June 4th, 1985, you could tune into a station, and watch the TV news broadcast from 20 or 30 years prior: the whole thing, commercials and all. I thought this was an idea that everyone would be into, but everyone I ever told about it barely humored me at all.

Dead fans back then—by which I mean the period when Jerry was alive—had a collective sense of Jerry as grand patriarch, as someone who was already as eternal as Father Time.

But the whole Dead wing of YouTube and a sizable portion of archive.org, to some extent, is this same thing: Tuning into the live events of yesterday to get the human news. We’re there on the scene with Jerry, and many others now gone, seeing things they couldn’t have possibly seen, unless of course they did, unless the last however many years of music Jerry made were a sort of Lincoln’s funeral train through American popular music, paying last respects to as many as possible for as many as possible.

Death as a relief is the motif running through every aspect of the Grateful Dead, duh, but when you take in this music as a person who’s lost someone/multiple someones, it hits different. The music becomes an infrastructure for grieving.

Bryan wanted me to write a screenplay based on the great Barton Hall conspiracy—he’d produce it with some other friends and this would have been how all of us broke into Hollywood. Kevin found my particular level of fandom quaint—no Bobby for me ever, please, nuh-uh, no how, no way—but then would insist on playing me his favorite deep cuts on his massive system as loud as possible, slipping them Bobby mickeys in the whole way anyway. Jonathan was my brother on the page, and he would have found it hilarious that I ever came around at all to this most essential of music groups. But in the end everybody comes around to the Dead.

I work on too many spinning plates in a day, and sooner or later I just get fried and can’t concentrate on anything anymore, and so I idly take in still more video of the Dead on YouTube. One modality of this is videos that showcase Brent, poor sweet doomed dead Brent Mydland from the Dead, howling madly, howling with deep constipated white soul through his signature number, “Blow Away,” here in my hometown, summer of ‘89, on the cusp of the great bad future, performing in the last ever concert there would ever be at JFK Stadium.

“Brent fucks,” I tell my best buddy when I make him watch this. And I wonder what the relationship with Brent and Jerry was like, if Jerry saw death in Brent’s eyes the way you can’t see anything but today, hindsight being not just 20/20 but all brutal. Brent’s not just invested in this song—a kind of windswept, fuck-it-all confession—he’s clinging to it for dear life, pushing it up a mountain like a Flintstone trailer home. Brent died the very next July after this performance. Garcia described his death as “crushing.”

I think of Jerry in a landslide of dark stuff in this whole period, and I’m humbled by how gratifying it is to take in his performances in this era. Each struggling one is completely magic but also open-wounded in a way that almost doesn’t feel right ethically—to gather joy and inspiration in this active pain and suffering. I don’t know what to make of it.

Dead fans back then—by which I mean the period when Jerry was alive—had a collective sense of Jerry as grand patriarch, as someone who was already as eternal as Father Time, somehow, by the time he was 50; his death is such that, even as a casual-about-to-cross-over fan, every year, ever since, I’ve been tangentially aware of its anniversary, usually a few times over: Something on the radio, something on social media, a buddy on a phone call mentioning it. All over the world, however many years later, people still grieve for Jerry.

Which is about right, because grief was kinda Jerry’s bag. Ghosts and skeletons and the rest of it parade through the whole Dead catalog, of course, but even my favorite Jerry—soulful Jerry, rhythm and blues Jerry, solo, or with JGB or Merle or Melvin—is saying farewell even when he’s blazing through a Motown cover. Was this intentional? What is the nature of grief in what Jerry shows to us in performance, in his voice, in the selection of material on offer, specifically at these JGB shows in the 1990s that I scour through in the night?

In them, I see the visage of grief, the Jerry of sorrow, in so many places, and so many faces. I see the Jerry Garcia visage of grief, perhaps most of all, in myself. Real close up on the bathroom mirror, in the beginning of the day and at the end, and when the concentration of badness in the air around us is running really high, passing through any room with mirrors, wherever. It’s sweet and kind, in its way, but also final. It is the red wine stain of existence. Once that lil’ bit o’death gets in, I don’t know if you can ever get it out.

Back at Shoreline, stuck in “How Sweet It Is” still and always, even the way Jerry looks at his bandmates in the JGB is different from how he looks at the guys in the Dead. He’s ear to ear with the grins, he’s making all these horny faces, like this whole time, all he ever wanted to do, maybe, was just play these Motown covers until the sun went down on the world. Towards the end of the lyric, I notice something: an embellishment? Or a mishearing? Where there should be “Everywhere I went it seems I’d been there before,” it’s a wholly different proclamation: All the things I did I can’t do them no more.

Joey Sweeney is a writer, musician, and creative director based in Philadelphia; he is also the publisher and editor of Philebrity.com, the cityblog he started in 2004. He is currently at work on a book of short stories and a new record. 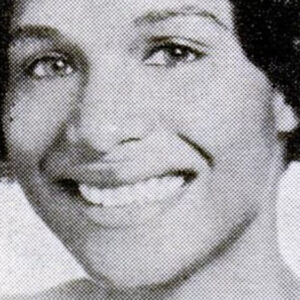 On Episode Nine of Ursa Short Fiction, Deesha Philyaw and Dawnie Walton kick off a two-part book club discussion on the life...
© LitHub
Back to top