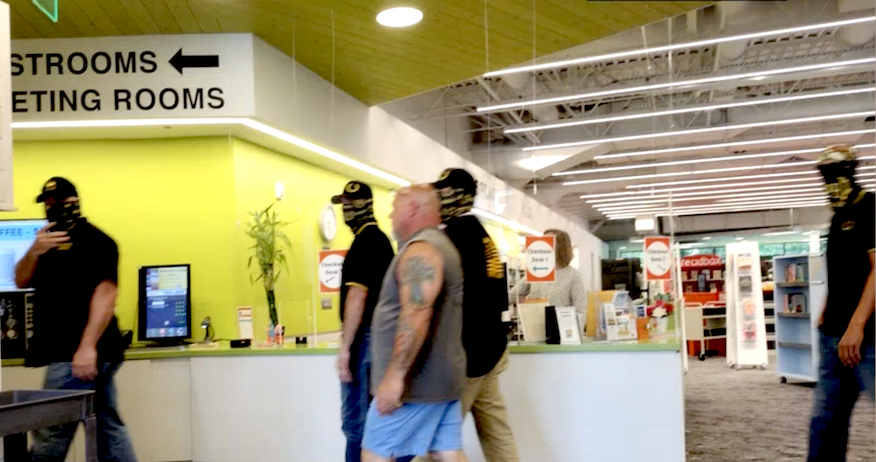 First they came for queer story time… And what did you do?

Last week I posted about a bunch of loser Proud Boys who attacked a queer-friendly drag queen story time in San Diego. As ever with these sad-sack wannabe Brownshirts there’s a distinctly pathetic element to their bullying, derived as it is from vast inner bog lands of self-loathing insecurity.

But last week was not—was never going to be—an isolated incident. It seems likely that the San Diego attack was instigated by the far right social media account, Libs of Tik Tok, which posted to its 1.3 million followers about the event. Sadly, awfully, more Proud Boys (which might as well be a catch-all for all self-proclaimed white nationalist “patriots”) have taken it upon themselves to attack children’s events across the country.

This past Tuesday in Wilmington, NC, as Pine Valley Library was hosting a Pride Story Time event, a group of six or seven men marched through the building directly to the room in which children and families were listening to readings of queer-inclusive books called Daddy and Dada and Heather Has Two Mommies. As Emily Jones, who was there with her one-year-old daughter, told WECT News:

“I had been talking about it for weeks. I was so happy that the library was having this inclusive environment for us. And it was very disappointing. It was so disappointing to see it unfold the way that it did. I get it’s a public space, so if people are holding signs outside and they are being peaceful, even if I don’t agree with the things that they are saying, I don’t feel necessarily like my life is in danger.

But when a group of known violent people, you know, at that point when those people show up and they’re coming into the library and trying to disrupt the story time. That’s when I felt unsafe and that’s where I felt it was not held appropriately. And they’re doing that on purpose, for sure, to intimidate people.”

And earlier this week, a library in Crawford County, Missouri canceled a “rainbow storytime” scheduled for today due to “violent threats against our librarians and the children and families of our community.”

For nearly 30 years, since the rise of Newt Gingrich, civility liberals have wondered aloud if “this was the last gasp of old, white, bigoted America,” repeating over and over again that the best response to bad speech was more good speech, that sunshine was the best disinfectant. And then the neocons took over. And then the Tea Party burbled up from America’s id. And then MAGA, and its incel foot soldiers, the Proud Boys.

This is how fascism works: put pressure on civil institutions to see which ones will hold; attack marginal communities to see how much the majority will allow… Repeat. The stark truth, now, is that help isn’t coming from elsewhere. Not the federal government, and certainly not the Supreme Court. Now is the time when we must defend our neighbors, our community, from nationally grown, locally distributed hate.

I’m not talking about isolating and arming up, I’m talking about getting involved, doing the messy, sometimes uncomfortable work of participating in your community. Volunteering, donating, showing up.

Because they’re going to keep coming, and they’re not going to stop at queer story time.

[H/T to Erin Reed on Twitter for drawing attention to these widespread hate campaigns.]