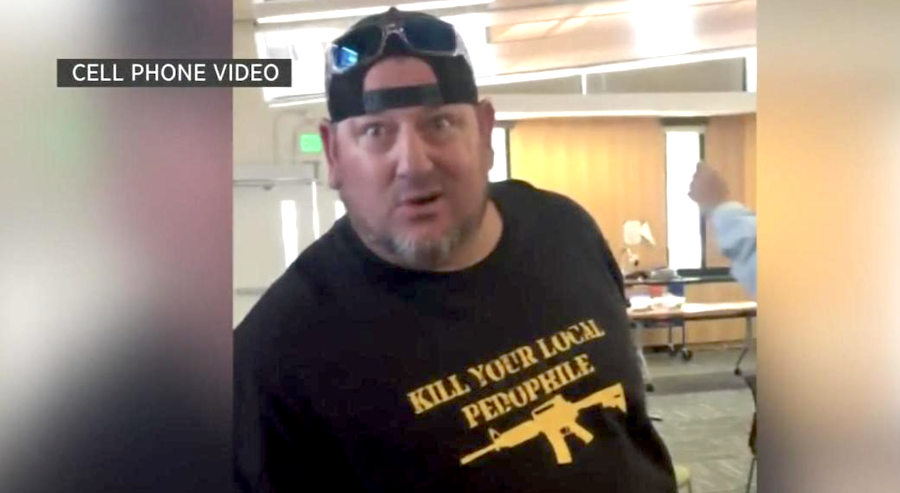 The sad-sack, fascist Proud Boys have sunk to a new low: storming a library story time.

America’s sad little homegrown fascist brigade, the Proud Boys (like the Brownshirts, but with less no sex!), have taken their victimhood/insecurity-driven agenda to new depths of idiocy (Proud? See image above.)

This past Saturday a group of around ten men interrupted Drag Queen Story Time at the San Lorenzo Library in Alameda County, California; according to the sheriff’s office:

The men were described as extremely aggressive with a threatening violent demeanor causing people to fear for their safety. Deputies responded to the scene and were able to de-escalate the situation.

Most of that “demeanor” was aimed at storyteller and performer Panda Dulce—aka Kyle Chu—who was reading to a group of pre-K kids in celebration of Pride Month. Said Chu, of the experience:

I’ve always received death threats, hate mail for doing drag queen story hour. This time it felt very close to violence. […] It was like a cacophony of voices just yelling over one another, taunting me, calling me a groomer, a pedophile, a tranny, and an “it.” […] There’s no agenda here, except for being able to accurately reflect the diversity of our world.

Though it feels a bit like shouting into the wind, I can’t say enough how simultaneously pathetic and dangerous these fascist assholes really are. It is impossible to see how civility and/or debate is going to get us clear of the white nationalist threat to the American democratic experiment, particularly during a week in which we see just how far one party is willing to go in courting the worst impulses of its racist, homophobic base.

And lest this incident be dismissed as a few rotten apples taking things too far, it seems likely the Proud Boys were made aware of the event via the social media account Libs of TikTok, a wildly popular clearinghouse for far right talking points.

As for the consequences of their brave attack on a pre-K story time, the Alameda County sheriff’s office says the men could face charges of hate crimes along with “annoying and harassing children.”