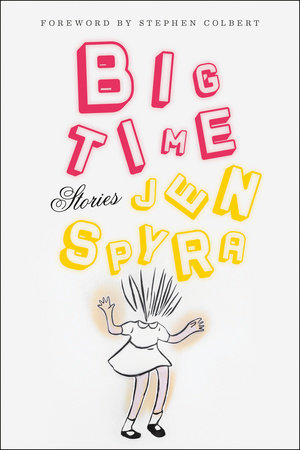 The following is excerpted from Jen Spyra’s short story collection, Big Time, about world of prehistoric influencers, woodland creatures plagued by millennial neuroses, an all-out birthday bash, and more. Jen Spyra is a former staff writer for The Late Show with Stephen Colbert and, before that, The Onion. Her writing has appeared in The New Yorker, The New York Times, McSweeney’s, and elsewhere. She lives in New York City.

I love both my kids equally, but I have to admit there’s some truth to that old saying, “You’re a different mom the second time around.” Now that they’re both grown, it’s funny to think back on how my parenting style changed from kid number one to kid number two.

Whenever Julie, my firstborn, wanted a snack, I’d wash and peel an organic, locally grown apple. I’d arrange the slices in a pleasing fan shape around a dollop of home-ground almond butter and serve it to her with a glass of oat milk.

When Jane, my second, wanted a snack, I’d bite off half a Snickers and spit it into her pen.

When Julie needed a bath, I would fill a crystal bowl with Himalayan rainwater. After meditating over the water for two hours, I would pack her on my back and trek to a field of ripe lavender, so that she could commune with nature as I bathed her.

When Jane needed a bath, I put her in a salad bowl and slid it out onto the fire escape during a storm.

When Julie had a bad dream, I’d listen as she told me all about it. I’d rub her back and tell her that the monster with the scary teeth and the one big eye was only in her imagination, and that there weren’t any monsters, period. Then I would sing her a lullaby until she drifted back to sleep.

When Jane had a bad dream, I’d tell her the monster she was scared of wasn’t real. “But you know who was real?” I’d say. “Aileen Wuornos. Aileen was scared of monsters, too, until she became one herself—a hitchhiking hooker who murdered seven johns in a rage. She ended up being executed by lethal injection. Some of those drugs can take hours to kill.” Then I’d say good night and lock the door.

When Julie passed her swim test and graduated to the level of Rainbow Fish, I gave her a high five and took her out to her favorite frozen yogurt shop for a celebratory treat.

When Jane became a Rainbow Fish, I woke her in the middle of the night and drove her out to the river, where I loaded her into a motorboat. I steered us out to a remote inlet and dropped her in the water. “Swim home, bitch!” I yelled as I gunned it back.

Whenever my husband and I argued in front of Julie, I would do my best to lower my voice or continue the conversation in a different room.

When we argued in front of Jane, I’d still go into a different room. But this time, it was to retrieve my blade. Then I’d tell Jane to go for daddy’s knees while I targeted his face and neck.

When Julie said she wanted to dress up as Elsa from Frozen for her birthday, I took her to a fancy costume shop and bought her a top-of-the-line Elsa costume with real satin lining and Swarovski crystal detailing on the cape.

And when Jane told me she wanted to dress up as Dora the Explorer for her birthday, I did the right thing for once. I went to that same costume store and I bought her a top-of-the-line Dora outfit. I just did it fourteen years after she asked me to.

See, I hadn’t spoken to Jane much since she’d run away from boarding school her sophomore year. I paid a PI to track her down, but when I finally found her, she was working the fryer at Uno’s and refused to come home. On the eve of her eighteenth birthday, all my guilt about her hit me in a suffocating pang—so I drove down to the mall, got the Dora outfit, and took it to the house she lived in with her thirty-nine-year-old boyfriend.

They lived in tract housing out in Rankin, a colorless little neighborhood ringing a strip mall off Route 48. I’d driven by half a dozen times before, but had never worked up the nerve to go and knock on her door. Today I did.

Jane was vaping when she answered, her enormous, pregnant belly pushing through a mesh tank top. As I took in her face, my eyes welled with tears.

I couldn’t believe my daughter was in there. Sunken eyes, hollowed-out cheeks. Her hair was straggly and thin. Her left eye was green and purple from a fading bruise. Beyond her in the messy darkness, an open laptop was blaring the laugh track from a sitcom.

We stood facing each other in silence.

“It’s your birthday,” I said finally, choking back a sob.

She glanced at the Dora costume. My hands were trembling. I knew a tic like that might set her off, but I couldn’t stop. Every muscle in my body tensed as I waited for her to react. Maybe she’d kick me. She’d done it before. Slap me, spit on me—when she was in one of her rages, all bets were off, and her bursts of violence could strike with the suddenness of a thunderstorm. But now she just turned around, leaving the door standing open, and walked slowly back inside. Relief flooded through me. The last time I confronted her, she’d held a Swiss Army knife up to her throat and threatened to kill herself if I kept stalking her.

I followed Jane back into the dark house. Underneath the overpowering mildew smell, I noticed another scent. It was acrid, sour and sweet at the same time, probably an animal decaying in the walls. Shuffling behind her, zeroing in on a small bald spot on the back of her head, I felt my foot tap something on the ground. I looked down and saw I’d accidentally kicked over an empty cup of Easy Mac, smeared neon orange, filled with cigarette ash.

“Don’t touch anything,” Jane snarled. She walked into the living room and slumped down onto the couch, a pink heating pad on her back. The cord from the pad wasn’t long enough, so it stretched in a straight line to the outlet. After adjusting the heating pad, she hoisted her feet up onto the coffee table, laying them on a folded purple-andorange checkerboard afghan. I remember that blanket. She’d knitted it at Deep Creek, the special school we sent her to when she started self-harming and nothing we could do or say could get her to stop.

“What happened to your eye?” I asked.

Annoyance flickered on her face. “Fucking Marshalls cashier,” she said, rolling her eyes and exhaling. “They’re all fucking racists at Marshalls.”

I nodded, uncomprehending. I had recently taken an online course with Julie about reckoning with our whiteness. I thought about mentioning this, but then of course said nothing.

Jane packed a glass pipe with marijuana and lit the bowl. I looked around the room at the traces of their lives. Several halfway-colored-in coloring books lay on a side table, along with a pack of cigarettes, an empty family-sized bag of salt and vinegar chips, and a Magic 8-Ball. My eyes stopped on the neon-pink lava lamp in the block glass window. We bought her that lava lamp on a family trip to Paris. Jane saw it in a variety shop in the Marais on our first day and begged for it; I tried to explain to her (and Dave) that we could get the exact same thing back home, where we wouldn’t have to lug it around in a suitcase for ten days—but Dave was putty in her hands. He’d do anything to avoid a meltdown.

A man’s voice called down from upstairs.

“Hey, babe! Jasper’s hungry. We have any more mice?”

“In the cooler,” Jane shouted back. She stuffed her hand into an open box of gingersnaps, grabbed a few, and pressed them into her mouth. I almost felt like smiling. I went through boxes and boxes of them when I was pregnant with her.

Our therapist had said the only thing we could do was to “keep the door open.” Let her know that we were there. I was supposed to be warm, loving, and accepting—no judgment, no expectations. I was not supposed to plead. But then I remembered that little bald spot on the back of her head, the white skin of her scalp, and I blurted out that I was sorry. That I wanted a second chance. I said I knew I was a shitty mom, and that I felt horrible for treating her differently than her sister. I begged her to let me try again. She sucked on the bowl deeply, blew a cloud of smoke in my face, and told me to go fuck myself.

I tried to hand her the Dora costume, but her eyes were already back on the screen. She was done. I shuffled to the front door and let myself out, closing it softly behind me. A dog barked a few houses over and then went silent, replaced by the buzzing of the fluorescent street lamps, which had come on when I was inside. I placed the Dora costume on the stoop and was halfway down the walkway when I heard Jane rip open the door behind me. She screamed that if I knew what was good for me, I would stay the fuck away from her and her baby. That I was toxic. That her psychic said I was a witch. And that she couldn’t wait to give her kid a better life than she’d had.

She slammed the door again, and as I walked back to my car I thought, Well, sure. That’s your first kid.

Yamen Manai on Waiting for the Perfect Allegory 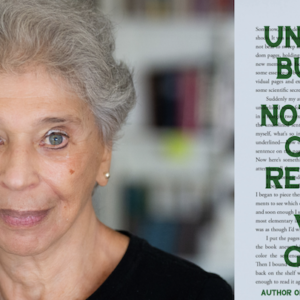 This Year’s NBCC Award Finalists: Unfinished Business by Vivian Gornick Over the month we’ll be sharing the National Book Critics Circle’s appreciations of this year’s NBCC Award finalists....
© LitHub
Back to top