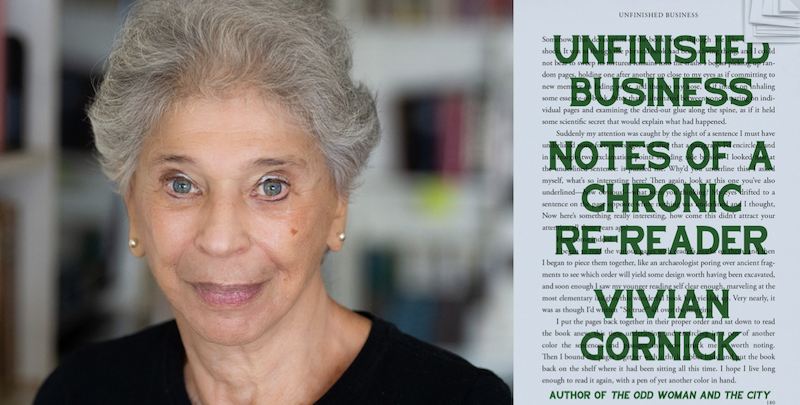 Carlin Romano on One of the Finalists for Criticism

Is it better to read a few books many times, or more books only once? Replace “more” with “many” and the threat of a terrible choice disappears—it’s plainly possible to do both. But every rereading of a favorite book takes time away from reading a new book for the first time.

Vivian Gornick, rightly celebrated for her excellent memoirs, approaches re-reading in a characteristic way, entwining it in the fabric of her life, literary and otherwise. Throughout Unfinished Business, she emphasizes perhaps the oddest aspect of rereading: that a favorite book read at different times in one’s life may not only reveal one’s faulty memory of it, but also utterly revise one’s evaluation of it.

In 10 compact chapters, Gornick tells us how she’s inclined to “turn and turn again” in different periods of her life to books she considers  “intimates.” She read D.H. Lawrence’s Sons and Lovers three times in 15 years, “and each time identified with another of its major characters.” When young she found “the stasis of The World is a Wedding,” Delmore Schwartz’s early collection of stories, “compelling,” but “today I do not. A situation that years ago had felt not only true but important, now seems to approach caricature.”

How one’s reaction to a book changes over time takes diverse forms, Gornick observes—times change just as readers change. “What young woman today could read Colette as I read her when I was young?’ she asks about the iconoclastic French novelist. Gornick reads Marguerite Duras’s The Lover differently today “in light of the insight only years of living could have supplied.” She dwells on Elizabeth Bowen, “whose power I felt when I was young, but whose value I did not grasp until I was old.”

What lifts Gornick’s literary analysis to absorbing literary meditation is her interweaving of the lives and characters of the authors under scrutiny and her own relationships. A Bowen protagonist reminds her of Daniel, a longtime lover who “betrayed and deceived and defrauded me countless times with open infidelities, public embarrassments, ruined vacations, even embezzled bank accounts.” She ponders Doris Lessing’s minor work, Particularly Cats, about the role of felines in the Nobel-Prize-winner’s life, and bounces it off her own up-and-down history with two rescued kittens.

Like many a critic who sometimes interviews authors and also reviews their books, she occasionally reacted badly to an author’s personality—in her case, that of the Israeli novelist A.B. Yehoshua. She then found herself unable to read his fiction charitably “because I could not get that bullying voice out of my head long enough to engage with the work.”

Not, that is, until much later. Then, suddenly, picking up a collection of his stories, “the prejudice fell away.”

Gornick draws incisive lessons from her rereading, a prime one being that one must be in a “state of readiness” for certain books. She shivers “thinking of all the good books I wasn’t in the mood to take in the first time I read them.”

And yet over her 12 previous books, Gornick has gifted us with many sharp judgments about the ones for which she was ready.  “When I was 10 years old,” Gornick recalls at one point,” “the teacher held up composition of mine up before the class and said, `This little girl is going to be a writer.’”

Teacher proved right. Gornick became a redoubtable reader as well. In Unfinished Business, Vivian Gornick continues her lifelong journey in which writing, reading and living whirl together as she provides us with—yes, I’ve reread this and it makes sense—vignettes that illuminate what it means to go after all three with fierce passion and singular independence of spirit.

Carlin Romano, author of America the Philosophical (Alfred A. Knopf/Vintage) and a former NBCC President, teaches media theory and philosophy at the University of Pennsylvania.

All Thirteen by Christina Soontornvat, Read by Quincy Surasmith 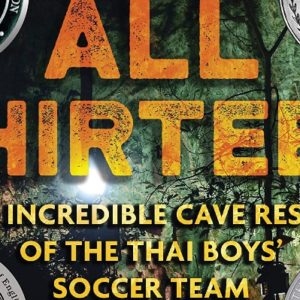 All Thirteen by Christina Soontornvat, Read by Quincy Surasmith