Gunnhild Øyehaug on One of the 20th Century's Great Sculptors

Via DAP
By Gunnhild Øyehaug

It is a long, long time since Swiss Alberto Giacometti and his brother, Diego, rolled a wheelbarrow full of their belongings into Paris, where he started a new life as a sculptor in a studio, which became messier and messier over time, and more and more full of sculptures (I imagine) (but I’ve also seen pictures of it), where, for a while, he was particularly influenced by surrealism, but then returned to more traditional sculpting, much to the disgust of André Breton who famously sneered: “Everybody knows what a head looks like”—it really is a long, long time since he lived the life that resulted in so many sculptures—because even though he threw away and threw away, he continued to make and make sculptures, some big, some very small, all very thin—which also resulted in so many texts, and books about Giacometti and his sculptures (and here is another one)—it really is such a long, long, incredibly long time from then until the moment when I bend down towards something that catches my eye as I walk down a narrow corridor in Louisiana Museum of Modern Art in search of a room where there is going to be a literary event, that to compare the distance between then and now with, for example, the distance between the earth and the moon is simply not adequate, because space is different from time.

Nothing is as ruthless and insurmountable as time, which is perhaps why none of this—not Giacometti’s arrival in Paris, nor his daily toil with sculpting throughout an entire life, his movements back and forth in his studio, his artistic development or everyday routines or view from the window where perhaps he watched pigeons land on a neighboring roof—if he had a window at all, that is—none of this matters as I hurry down the corridor. I have no sense of direction, and there is an event with Sally Rooney in one of the rooms beyond the Giacometti exhibition, I think, and I had not intended to stop, and these movements of mine along the corridors of Louisiana Museum of Modern Art would also have been lost had I not written about them here—but back to Giacometti, I had seen Giacometti before, Giacometti belonged together with Yves Klein and Anselm Kiefer to a period in my life that I call my youth, but which in fact was the short period between 20 and 23, when I discovered, with all the intensity of youth, Klein’s blue, Kiefer’s bookshelves and Giacometti’s Walking Man, and I wrote poems about them all. It was, in brief, a long time since then.

I was 43 years old, at Louisiana Museum of Modern Art, and finished with all that. So finished in fact that even the thought of Klein, Kiefer or Giacometti annoyed me. Perhaps Giacometti, in particular. He was passé in my inner life. I could not see a Giacometti statue without a strange feeling of anguish, as though I simply had to hear the fantastic poem by the Norwegian poet Tor Ulven in the background: “Finally a human surfaces // like stone’s ability to scream.” 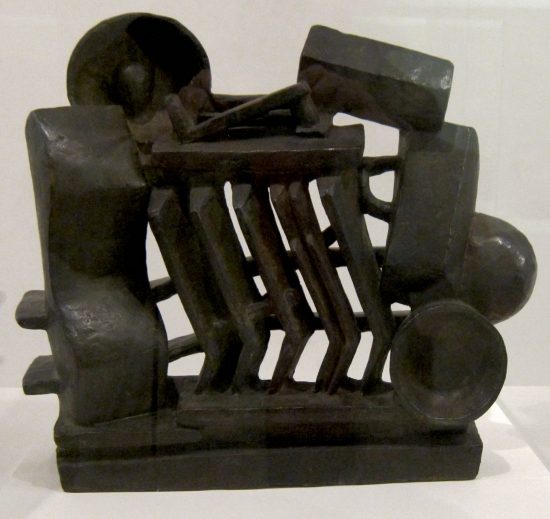 But then this happened: something caught my eye, low down to my left. There was a tiny sculpture in something that resembled an aquarium, a display case set into the wall. I almost heard a kind of whistling as I bent down from what now felt like a great height towards the miniature creation. The bust stood on a small plinth that looked as though it had been pulled out from a larger base, and the man who stuck up on top also looked as though he had been pulled out, not carved, as though two fingers had dug down into the material, found the person who was hiding there, unfinished, and pulled, then let go just as the gigantic fingers got a firm enough hold to pull the man out of the plinth. So he was no further out than his ribcage and was not really separated from the material. There was no face, more a presence that was hiding, but one could tell that it was there, inside the tiny bronze head.

I bent down, while he seemed to be rising up, and as I remember it: we met at that peculiar fluid point between up and down. Now that I was down there, I discovered that there were more miniature creations. A minute woman’s head with short hair. The narrow head of an elderly man, recreated in bronze in beautiful detail, only teeny tiny. A thin man straight as a nail standing out from a plank of wood, only he wasn’t a nail, but a person. They were all on rectangular plinths made from the same material as themselves.

“Art is only a means of seeing. No matter what I look at, it all surprises and eludes me, and I am not too sure of what I see.”

And then what happened? Well, this: I felt a lump in my throat, and the tears welled up. Or the tabloid version: TEARS SPILL OVER. TEARS WELL UP AT SIGHT OF TINY FIGURES STICKING UP FROM SAME MATERIAL AS THEMSELVES, STANDING IN DISPLAY CASE IN WALL. TEARS FLOW AT LITERARY FESTIVAL. AUTHOR DEEPLY TOUCHED BY SIGHT OF HUMAN CONDITION! (A CLOSER ANALYSIS OF SAID TEARS NOT WRITTEN IN CAPITAL LETTERS might say: We believe the tears were the result of A) the author feeling that her own existence was inexplicably tall (about five meters) in relation to these very small sculptures (none of which were bigger than 12 cm, we believe) and seeing them in there did something to said person’s perspective and perhaps even understanding of life, that there is a kind of core that can be captured, sculpturally, and that this core is—

well, what is it, when confronted with the fact that life exists? Humbling, perhaps? That the size of the figures demanded humility? Or could it be that the tears fell because B) she recognized something specific about what it meant to be human there and then in 2018, when the world seemed to be more absurd than it had been for a long time, when precisely the humanity of people had dwindled and shrunk, and the barbarity of human history had crept out from its hiding place, and the sight of a tiny person being pulled from a tiny plinth reminded her of who we are, that we are humans.) 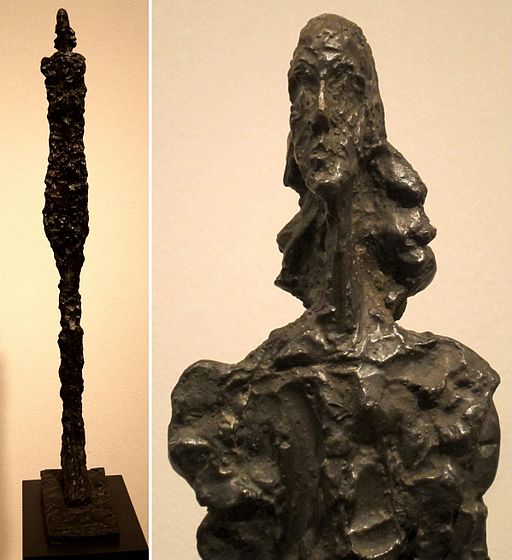 But could the tears also have been triggered by C) the understanding, quite simply, of what it takes to portray humanity in art, and to work with a material, to shape it. The figures grew out of the same material as themselves. That the foundation was so important. Because at this point in history, at the same time that human barbarity had crept into positions of power around the world, the battle between truth and fiction, what is true and what is false, was echoing through journalism and art. And at this point in Norwegian literary history at least, it was also the case that the prolonged wave of auto-fiction in literature, which had been followed by a wave of fact-checking in fiction, could lead to exhaustion in some authors, especially those who were overwhelmed when looking at small figures sticking up from big plinths in a display case in a wall at Louisiana Museum of Modern Art, and who stood there thinking that if one were to compare this, the discussion on the relationship between fiction and fact, with Giacometti’s sculptures, and in particular, the tiny one that looked as though it had been pulled out of the plinth, one could say that fact-checking would require a distinct face, we would not want that layer of material that hid the face.

Nor would fact-checking approve of the plinth, the figure should not be sticking out from any kind of base made of the same material, and this little one here had two plinths, and well, that was too much, as though the figure did not make it clear enough: this portrayal of humanity that you have before you is made from artistic material, and is not flesh and blood. Fact-checking does not want a pillar of fiction, that is what I think, thought the author who was now almost leaning against the glass.

Fact-checking wants everything to be real. To be honest, the author, who was of course me, was sick and tired of the whole debate as she stood there looking at the tiny figure, tired to her very core—a core, we should point out, that was made up of language, parts of speech, sentence structure, (among other things, a very long first sentence), the outline of an overarching essay structure that linked that mind-blowing moment when “I” bent down to get closer to a miniature sculpture, with the distance to Giacometti’s life and work, etc.

Because it is amazing, is it not? That it was apparently when Giacometti was working on the sculpture called “Hands Holding the Void” that he felt the need to use a model again, and so was thrown out of surrealism, because is that not what we all wonder about, how to work with hands and void.

I was reminded of this again a while ago when I read Mary Ruefle’s piece about imagination: “It is impossible for me to write about the imagination; it is like asking a fish to describe the sea.” And I was reminded of it again when I read something that Giacometti had said, which was quoted in an article in The Guardian: “Art is only a means of seeing. No matter what I look at, it all surprises and eludes me, and I am not too sure of what I see.” And I thought about it again when I read that Giacometti had been corrected by his own father, the painter, when he was going to paint a still life of pears. His father had painted the still life fruit in normal size, but when Alberto, aged 18, started to paint, “the pears were tiny. I started again, but each time, they were just as small.” And no matter how annoyed his father got, and asked him to paint them again, and no matter how hard Alberto tried, the pears were always very, very small.

But none of this will last either. It is Sunday today. The distance from this point, when I sit here writing, to a time when I no longer exist and have been wiped out for ever, is endless. My family are out and I am sitting in my office writing, as the wind shakes the spruce and birch trees on the other side of the road, on the small island of nature that has been left here in the middle of terraced-house land, and every so often small herds of snowflakes are driven horizontally down the road, while I try to recall that moment in Louisiana Museum of Modern Art when I was looking for something else, and on the way discovered Giacometti, again. 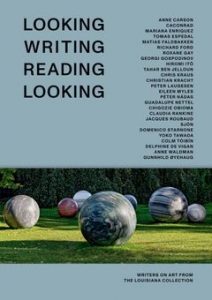 Gunnhild Øyehaug is an award-winning Norwegian poet, essayist, and fiction writer. Her novel Wait, Blink was made into the acclaimed film Women in Oversized Men’s Shirts. She has also worked as a coeditor of the literary journal Vagant and Kraftsentrum. Øyehaug lives in Bergen, where she teaches creative writing.

Victoria Chang on the Self
and Its Many Deaths 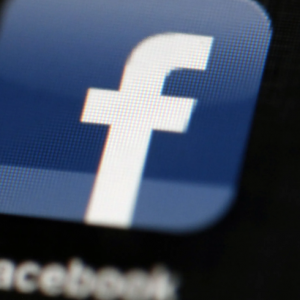 Steven Levy on the Real Story Behind Facebook Over the last 200 years, nothing has divided us more than our free-market economic system. Is it the source of every social...
© LitHub
Back to top
Loading Comments...