Steve Edwards on the Daily Astonishments of Raising a Child

Since my wife took her dream job at an art museum last fall and committed herself to the hour-long commute that came with it, I’ve taken the lead in schlepping our kid around—to school and play-dates and doctor’s appointments. Would I rather spend that time on my writing? Yes. Aspiring writers write. Does my full-time job as a teacher already bite into that writing time? Yes. But I have flexibility. And summers. And I love that my wife has a job that makes her happy, even if it takes her an hour to get there and an hour to get back. With love of any kind comes sacrifice.

The car is a second home to our son: a place to eat and sleep and cry and confess. Sometimes he gets control of the iPod, and sometimes—when his toddlerhood obsession with The Wiggles comes roaring back—the iPod mysteriously disappears. But usually his taste is okay. He likes Springsteen, Emmylou Harris, Dwight Yoakam. On hot days, we roll down the windows, coast our arms on the air.

He’s big for six-and-a-half but still fits in a car seat. I spend a lot of time checking him in the rearview, not because he needs checking but because after all these years I still can’t quite believe he’s mine, or that we’re each other’s. And where did his infanthood go, by the way? How did time pass?

I spend a lot of time checking him in the rearview, not because he needs checking but because after all these years I still can’t quite believe he’s mine, or that we’re each other’s.

“They grow up so fast,” warned every older parent who ever saw us in a grocery store when he was a baby.

Somehow I never believed these kindly, smiling strangers gazing at us and seeing only an image of their former selves. Or it wasn’t that I didn’t believe them but that I was put off by their inability to articulate anything other than a cliché. They grow up so fast. Yes, of course. Now, however, I get it. There’s no explaining what it really feels like, all the love and regret and fear and hope and possibility those early years engender. The exhaustion of those early years. It makes you stupid. I remember once I drove my son to preschool, dropped him off, and then started down the highway to work when suddenly panic struck—I thought I’d forgotten to drop him off. I checked the rearview. His car seat was empty. Instead of feeling relief, though, I panicked again. My heart thumped in my neck. Since he wasn’t in his car seat, I thought I’d lost him.

But all that’s ancient history. We drive around now in my little blue Prius—my big-boy six-and-a-half-year-old and me—and I sneak glances at him as he fiddles with the iPod or turns pages in a Ranger Rick magazine or gazes out the window at the orchards and lakes of the bucolic Massachusetts town we call home. And even though it doesn’t always seem like it, he is watching me, too.

If one of my fellow citizens commits an egregious and wanton act of senselessness behind the wheel, eliciting from me a choice word, my son is there to scold: “Daddy, don’t be mean. Don’t say fuck.”

In a sign of disappointment and exasperation, he sighs and rattles his magazine. And I love him so much then.

Last February, signs started showing up in lawns across our town—and in the town center even bigger signs appeared in the windows of a building: TRUMP. We saw them on the way to school in the morning, stopped in a long line of cars behind a school bus. “Daddy, what’s Trump?” my son wanted to know. I thought about it a second. I couldn’t just say, “He’s a fucking asshole.” Instead I said Trump was Donald Trump, and he was a mean guy, a bully, and wanted people to vote for him for President. My son wanted to know why he was so mean, and I said I didn’t know why but that for some reason he thought he knew better than everyone else, and that he didn’t listen or show other people respect. These were concepts my son understood. As someone with a speech and learning delay, he has experienced his share of schoolyard bullshit.

They had also been studying Martin Luther King Jr. in his kindergarten class as part of Black History Month. To my pride, equality and nonviolence and love were things my son had showed a passionate interest in. In the car that day he said, “When’s Donald Trump going to stop being mean, Dad?”

A few days later we were driving to school again, and again stopped in traffic. “There’s another Trump sign,” he said. “Why’s Donald Trump keep putting up Trump signs?” I glanced in the rearview. I said that he wanted us to vote for him. “I’m not voting for him,” my son said, frowning.

We were quiet a second, then I asked him who he was going to vote for. “I’m voting for King Luther Jr.,” he said.

And that’s how it goes with your kids: you watch them, and they watch you back—and they see you for everything you are, the good and the bad.

I looked back at my boy in his striped shirt and bowl haircut and big blue eyes and missing bottom tooth, all that innocence and unknowing wisdom, and felt as though whatever my faults may have been as a parent, I had at least done enough to get us to this moment. And maybe I wasn’t writing—maybe I wasn’t working my way toward the big breakout success that I had assumed to be just around the corner since I was twenty years old—but I was here as a witness to something impossibly good. And I’ll tell you true, yes, it only broke my heart a little when that very next week, driving home from a walk at Walden Pond, he announced that he wasn’t going to vote for King Luther Jr. after all. He had changed his mind and his allegiance had shifted to Bernie Sanders. I was surprised. I wanted to know why he was going to vote for Bernie.

And that’s how it goes with your kids: you watch them, and they watch you back—and they see you for everything you are, the good and the bad—and in the unrelenting stop-and-go traffic of time’s passing, of childhood’s passing, of the writing you are not getting done in order to schlep them around, they hold in their tiny hands all the while the capacity to astonish and confound you.

I remember in my younger days, when all I wanted to do was write and win the love of strangers, that I never felt more myself than when I sat down at a desk to be spirited away by stories of my own making. I’d found a home and a purpose in sentences, images, insights. For years, whenever talk between my wife and me turned to starting a family, I worried that fatherhood would kill my writing by taking me away from the place where I felt like myself. But I couldn’t have imagined then, not even on my best writing day, how unequivocally me I would come to feel in a car with my son on our way to nowhere in particular. And I keep that in mind for moments when I might feel tempted to resent my wife’s commute or any of my son’s needs. Because, yes, fatherhood may be killing my writing career by keeping me away from my desk, but it may be saving the writing itself by showing me exactly who and what I am, and what really matters. 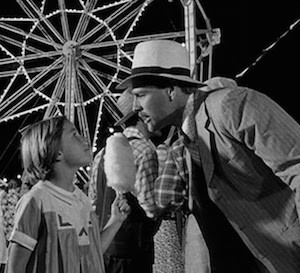