The author of The Magicians on genre, Buffy, and writing against Trump

Odds are good that you’ve heard of Lev Grossman’s bestselling novel The Magicians and its sequels, but if not, here’s the premise: a young, fantasy-obsessed young man finds out that magic is real—and that he’s invited to a special school to study it. But things aren’t all lights, sprites and Harry Potter, mind you. In Grossman’s universe, magic is hard, and sometimes painful, and often quite dark, and so is Quentin’s journey, and so are the lands it leads him to. Suffice to say: those who haven’t read the books should take them for a spin. The series was adapted into a television show on Syfy in 2015, and the second season, which premiered last week, promises to be even better than the first. Over email recently, Grossman—who is also an award-winning journalist and the book critic at Time—answered a few of my questions about the show, the role of fantasy in troubled times, and you know, magic and stuff.

Here’s something I always think about with adaptations like this: How does the magic on the show compare to the magic you saw in your head while writing?

This is something that has actually worked out surprisingly well. I had a very specific, very technical vision for the magic in the book. But it’s all very well to write about people contorting their fingers and mumbling in foreign languages, it works fine on the page, but that doesn’t mean it’ll work onscreen. But as it turns out, it does. The showrunners and the cast really doubled down on this—there’s a dedicated choreographer who works out the hand movements in advance. And the actors really sell it: you can’t be half-hearted about magic, you can’t wink while you’re doing it, or the whole effect falls apart. I don’t want to sound cheerleaderish, but they really commit to it a hundred percent. I find it quite moving.

I saw at least one review that compared The Magicians to Buffy—which is (in my view) probably the best thing anyone can say about a television show. Are you a Buffy fan? Do you think the shows are comparable?

I love Buffy. It’s the last TV that I cleared my schedule for, and met up with a group of fellow fans to watch it when it aired. The things they did on that show—the relationships, the music, Buffy’s mom—blew the doors off what I thought was possible onscreen. And when I tried to think about where The Magicians show would sit in popular culture, Buffy was always where I ended up—which isn’t necessarily what networks want to hear, because Buffy never got the ratings it deserved, but really where else would you want to be? I don’t know if The Magicians deserves to be mentioned in the same breath as Buffy, but Buffy is definitely one of the things that made The Magicians possible.

Fun fact: I have met Joss Whedon three or four times, counting phone conversations, and I have completely and totally choked every time. My brain shuts down. I don’t get starstruck much anymore, but Whedon I just cannot handle.

The elephant in the room for me when talking to anyone these days is the current political climate and our new and terrifying regime. I wonder what you think the project of storytelling in general—and fantasy in particular—should be in 2017 and beyond?

I’m not a political writer, particularly, or even at all, but I cannot overstate how much what is happening in this country politically right now has affected what I do as a storyteller. What we all do. The grotesque, violently mendacious way that Trump uses language—when I write now, I am writing against that. I am watching him trash the tools I use for my art—words—and I have to take that into account, and work with the damage.

And this affects fantasy in specific ways. By its nature fantasy focuses on power relationships a lot, whether that power is political or military or magical in nature. You get a lot of monarchies, with the usual abuses. It also deals with outsiders a lot, and the question of who is human and who isn’t, who matters and who doesn’t. These issues have always been important, but right now in this country they are urgent and central.

It feels to me as though the literary world is still very fraught about genre and magic (what is Literature, what isn’t, what is for Children, what isn’t, is it okay to have Magic in your Serious Novel) but visual media seems to more or less transcend any hand-wringing about those categories. I wonder why you think that is, and if you think these distinctions have any value.

It is fascinating. Literature is truly jurassic in the way that it handles issues of genre and high and low. It’s not just visual media. When your medium is getting lapped by ballet and opera and poetry, you know you are not in the vanguard anymore.

Why should that be? Fantasy cuts against a lot of the literary values we inherited from the modernists (whom I love). Fantasy is traditionally less about psychological interiority and more about externalizing inner conflicts in symbolic forms. Fantasy is plotty, it runs on heavy narrative rails, whereas the modernists were vigorous critics and disassemblers of narrative architecture.

Fantasy is also, in its way, quite anti-establishment. It announces its priorities up front: the reality with which we are going to be concerning ourselves is not the reality of your job, or your school, or your government. We are going to be talking about something else. It’s in a lot of people’s interests to marginalize or trivialize that reality.

I should be clear about this: I don’t believe in magic of any kind, in any form. If I thought magic was real I would be doing it, not writing about it. But I don’t.

Writing Without a Net: How Repealing the ACA Will Hurt Freelancers

15 Works of Contemporary Literature by and About Refugees 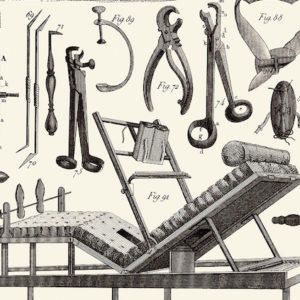 Writing Without a Net: How Repealing the ACA Will Hurt Freelancers

In the fall of 2015, I left my position as a grant writer for a literacy non-profit. I’ll be the first to tell you that...
© LitHub
Back to top