Faith Merino Wonders How We All Got So Much Wrong

In February, the New York Times documentary “Framing Britney Spears” joined a spate of recent reexaminations of all the things we got wrong over the last three decades, including but not limited to: Anita Hill, the Central Park Five, Tonya Harding, the Superbowl wardrobe malfunction, Monica Lewinski, and so on. Movies, documentaries, and op-eds are calling into question the framework through which we perceived certain public people and events, and in what may be a miraculous gut-check moment amid the last several years of systematic misinformation, we’re coming to the realization that our formative memories of major cultural events over the last few decades were, in many cases, wrong.

But those of us who grew up in conspiracy theory households fueled by conservative talk radio in the 1980s and 1990s, and Fox News in the early aughts, are grappling with the realization that we didn’t just misunderstand history; we lived a completely different history altogether. Our reckoning with cultural memory is that of false memory, and as we start on the vertiginous work of reconstructing our individual pasts in relation to the larger cultural narrative, we have to figure out what we don’t know we don’t know. So what does that mean for those coming of age in the time of the many-tentacled QAnon conspiracy theory and social media virality?

I am the oldest of eight children and the daughter of a mentally ill mother who is also a rightwing extremist with a predilection for conspiracy theories. I grew up with a grab bag of conspiracies, ranging from the laughable and easily disproven (i.e. the government is putting hormones in our drinking water to cause infertility in an effort to reduce the population, and the proof can be seen in tiny alligator penises in Florida) to the frightening and almost plausible (i.e. high-level Democratic politicians have killed people). These conspiracy theories grew out of a general framework of misinformation about liberalism, feminism, abortion, et cetera.

I remember the first time I realized my facts weren’t just incomplete but wrong. I was 16 and debating abortion with someone online (as one did in 2001), and I said, “Are you denying the fact that a twelve-week-old fetus has a preferred sleep position?!” To which my opponent responded: “Yes.” It wasn’t even a real rebuttal, but it still made me question what my mother—a crisis pregnancy center volunteer—had taught me. Later, some of the more audacious stories were shaken apart. I had been told that Hillary Clinton was a hyper-liberal feminist who had personally had one or more “partial birth” abortions (referring to the late-term dilation and extraction abortion procedure that was so rare as to only account for 0.17 percent of all abortions in 2000). Imagine my surprise in the 2008 primaries when I actually looked up her voting record and saw that by today’s progressive standards, she was relatively moderate.

As we start on the vertiginous work of reconstructing our individual pasts in relation to the larger cultural narrative, we have to figure out what we don’t know we don’t know.

It was wholly destabilizing each time one of the stories my mother had unflinchingly told me was disproven—made worse by the fact that I thought that, if not everyone, then most people agreed that these stories were true. I thought most people agreed that Hillary Clinton had had multiple “partial birth” abortions. The things our mothers tell us orient us in the world, and over the years, more of my mother’s conspiracy theories bumped up against reality, so that by the time I started college I had to acknowledge the truth that some of my memories weren’t real and there were gaps in my timeline.

The dyssynchrony between my knowledge of the world and the larger cultural narrative came in part from my participation in the larger world of conspiracy theories as a function of story. Conspiracy theories share certain characteristics with myths, employing the same cast of characters we would recognize in any other ancient legend: the hero, the trickster, the father, the witch, the monster. In a Levi-Straussian structuralist theory of myth as fundamentally recognizable across cultures and peoples, QAnon fits snugly within the framework of The Hero’s Journey. The (debunked) conspiracy theory tells the story of a man who, in true Oedipal/Shakespearean fashion, is a high-level government figure (dare we say princely?) who must stop the Evil Queen/Witch Hillary Clinton and the Murderous King Bill Clinton, as well as their dastardly court of Democrats. Originally Donald Trump was the Good King/Father who had come to destroy the Medusa and her legion of monsters, but he’s since been bumped to the King Whose Throne Has Been Usurped—and now that he’s been banned across every social media platform, he’s become the King in Exile.

We recognize these stories. We know these characters and their desires, as well as the journeys they’ll go on to fulfill their quests. In February, Rep. Jim Jordan tweeted that it was actually Nancy Pelosi who prevented the National Guard from deploying to protect the Capitol during the January 6th insurrection, seemingly painting her as another evil queen/Medea/Medusa—one whose life was under threat by many as they stalked the halls of the Capitol, singing, “Nancyyyyyyy.”

Conspiracy theories function within this call-and-response system—Mike Cernovich and Jack Posobiec say, “Children are being sexually trafficked out of the Comet Ping Pong pizzeria in Washington DC,” and a lone gunman takes up the mantle of Hero, storming the restaurant to find the non-existent children. But calls to action by conspiracy theorists are not always so overt. Sometimes it comes down to a signifier: “Vince Foster’s death is suspicious. Something isn’t adding up.” Those less clear, less direct conspiracy theories were the more insidious stories in my home growing up, because they were the soup of insinuation and implication in which I was always swimming. I filled in the gaps, I made the structural jumps to the obvious next step in the story, and then it became my story, which became my memory of the event. And then I became the storyteller.

Like any story, a conspiracy theory has to be aerated through tellings and retellings in order to stay alive, and through the reach and versatility of social media, myth becomes memory. At this very moment, my mother and thousands of other people are retweeting Jim Jordan’s claim that it was actually Nancy Pelosi who prevented the National Guard from deploying to the Capitol. On the actual day of the insurrection, Representative Matt Gaetz loudly proclaimed that the rioters were actually Antifa/Black Lives Matter protestors. How many people will grow up with a memory of the day Antifa donned MAGA hats and Trump flags and stormed the Capitol and Nancy Pelosi blocked the National Guard from quelling the riot? How many people will remember the day Jennifer Lopez and Lady Gaga sang at a usurper’s fraudulent inauguration?

It was wholly destabilizing each time one of the stories my mother had unflinchingly told me was disproven—made worse by the fact that I thought that, if not everyone, then most people agreed that these stories were true.

The cliché that there are two Americas is not inaccurate. I often feel as though I grew up in a different America, with memories of Hillary Clinton and Madonna and Barbra Streisand as “baby-hating, pro-abortion witches.” Even today I sometimes catch myself feeling a sense of unease when I hear their names because I spent so many years falsely associating them with being part of an evil, “anti-life” cabal.

What prompted me to question those conspiracy theories was my desire to be a person in the world, to contribute to and be recognized by the larger global community rather than an insulated subset of conservatives. I wanted acceptance by the mainstream, and I think the same is true among most conspiracy theorists. It’s not enough to tout your JD from Bob’s Pro-Life Anti-Witch University for the New Right. Ted Cruz and Josh Hawley flaunt their Yale and Harvard credentials to show that they were accepted by the mainstream before they rejected it.

That said, one of the more frightening aspects of the QAnon phenomenon is the speed with which its adherents are ready to throw away their relationships, which may be due to the fact that social media makes it possible to simply create a new online family around a shared hyperfocus. But last December, my mother’s QAnon obsession became so destructive that I threatened to cut off all contact indefinitely to protect myself and my children, and then in a surprise twist, she suddenly broke the fourth wall and admitted that she likes conspiracy theories because they’re fun and make her feel like she’s a part of something. It was the first and only time she’s ever admitted that she doesn’t really believe in the fantasy world she’s constructed for herself, as I believe most conspiracy theorists don’t actually believe in their imagined realities. What they believe in is the thrill of belonging and having a shared narrative, which is why it’s imperative that we don’t ignore conspiracy theories, but rather laugh at them.

To prevent a conspiracy theory like QAnon from becoming the next generation’s cultural memory, we have to make it uninhabitable as an imagined reality. We have to continually point out its absurdity—because it is absurd. We won’t stop conspiracy theories from happening, but we can prevent them from becoming our shared narrative.

Faith Merino is the author of CORMORANT LAKE and an MFA student in creative writing at UC Davis. Her short stories have won awards and honorable mentions from Glimmer Train, Boulevard, The Moth, Jabberwock Review, and more, and she's received fellowships from The Martha's Vineyard Institute of Creative Writing, The Disquiet International Literary Program, and Writing by Writers. She lives in Sacramento with her husband, sons, and animal friends.

The Poetics of the Body: An Interview With CM Burroughs 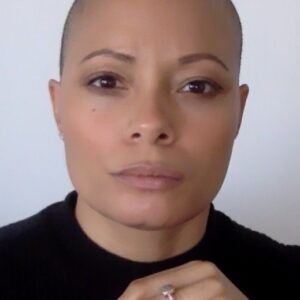 The Poetics of the Body: An Interview With CM Burroughs In this next installment of our series of interviews with contemporary poets, Peter Mishler corresponded with CM Burroughs....
© LitHub
Back to top