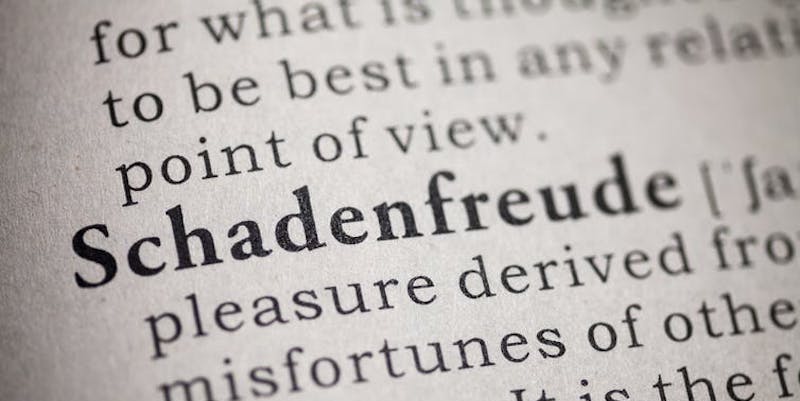 Everyone’s looking up “schadenfreude” in the dictionary today. Wonder why?

Today, Merriam-Webster observed that word searches for “schadenfreude” had spiked 30,500% after President Donald Trump announced his positive COVID-19 diagnosis—and the word was included in several news stories and headlines about the diagnosis and the global reaction.

Merriam-Webster defines the term, borrowed from the German roots schaden (“damage”) and freude (“joy”) in the mid-19th century, as “enjoyment obtained from the trouble of others.” Many politicians and prominent cultural figures have pointed out the sweet irony of Trump testing positive for the virus after months of denying its hazard and harm.

But this wouldn’t be the first time a word has been elevated into the cultural consciousness by the news since Trump began his campaign in 2015.

Only a few days ago, the word “logorrhea,” which is derived from Greek and means “excessive and often incoherent talkativeness or wordiness,” began to trend because Rachel Maddow used it to describe the most recent U.S. presidential debate. And of course we must not forget the spike in searches for “braggadocious” and “misogyny” in 2016.

What will the next awful trending word be? Only time will tell. In the meantime, for an in-depth history of the word “schadenfreude,” I suggest this essay from Tiffany Watt’s book on the subject.