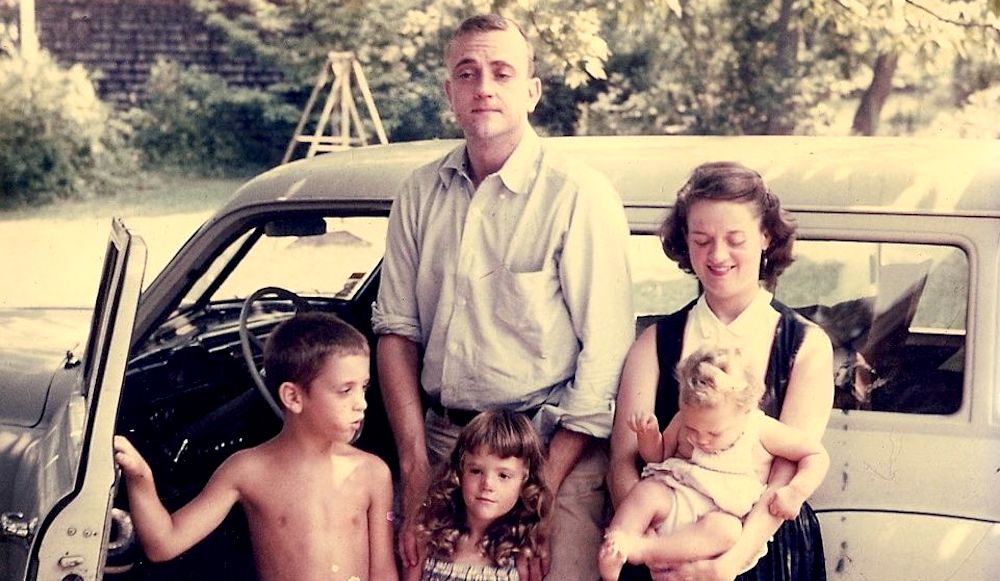 "Jane recognized her husband’s tremendous talent and put her own dreams and ambitions aside."

Via Random House
By Edith Vonnegut

On July 2, 1945, on the way from France back to Camp Atterbury, Indiana, Kurt stopped in Washington, D.C., to see Jane and convince her to break it off with her other suitors. They continued on to Indianapolis together, as Jane wanted to see her mother, who had had another nervous breakdown. Kurt proposed marriage in Indianapolis, and Jane accepted.

Although he had talked about marriage no fewer than twenty-four times in his letters, this was Kurt’s second real proposal. The first time he proposed in person had been one month after the death of his mother. It was an unusual proposal. He’d been to the dentist and was wearing his extracted molar around his neck. He ripped his shirt open, revealing the bloody tooth, proclaimed how much he loved her, and asked for her hand. My mother always told this story in a kind of baffled way. I don’t think she liked that approach.

The second proposal was more traditional, and she accepted, returning to Washington wearing an engagement ring made from half the stones on his mother’s wedding ring. We don’t know exactly what finally tipped the balance in Kurt’s favor. Perhaps he was the loudest, most persistent voice in the room. Perhaps she fell in love with the writing and the dreams they were creating together . . .

On August 6 and 9, 1945, the United States dropped atomic bombs on Hiroshima and Nagasaki, killing more than 200,000 people.

One month later, on September 1, 1945, Kurt and Jane married in a Quaker ceremony on the backyard terrace of Jane’s house in Indianapolis. Allie was the maid of honor. The young couple honeymooned at French Lick Resort on the edge of the Hoosier National Forest. Family legend has it that Jane made Kurt read The Brothers Karamazov on their honeymoon. He admired her excellent education and deferred to her often regarding literature.

At the end of the month, Kurt had to report to Fort Riley, Kansas, to finish his military duty. He was assigned to the secretarial pool. It is here, at Jane’s coaxing, that he began to write short stories. Jane had always thought she’d be a writer too, but she quickly recognized her husband’s tremendous talent (even before he did) and put her own dreams and ambitions aside in order to help him. Jane lived at home in Indianapolis during this period, seeing old friends and spending time with her father. She briefly had a job selling dresses in a department store, but most of her time was spent editing Kurt’s first stories and submitting them to agents.

It was during this time that Kurt, after working on several short stories, realized he needed to write about his experience in the war. 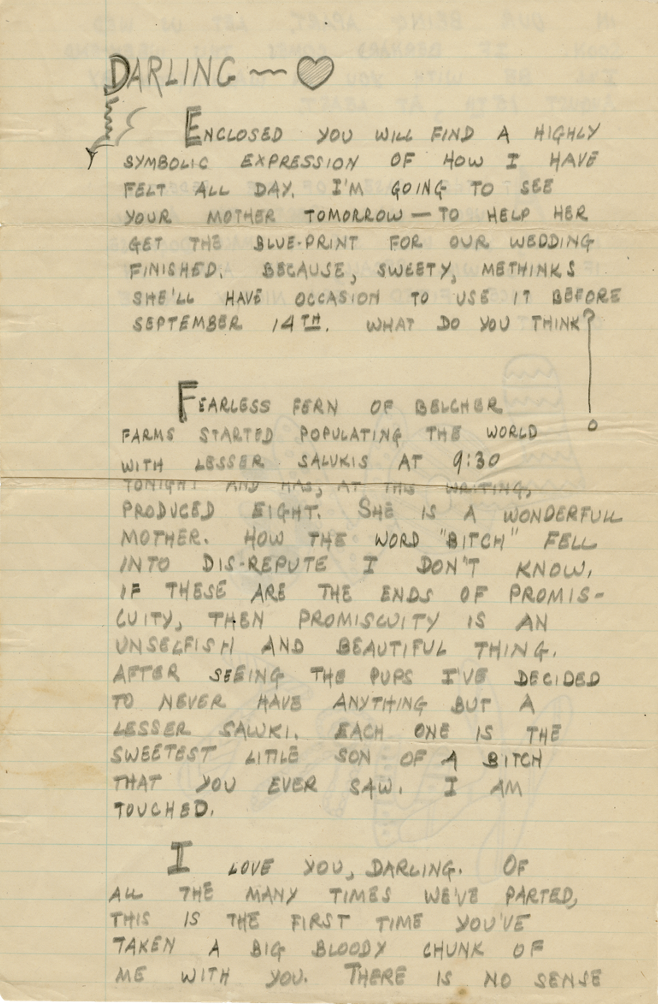 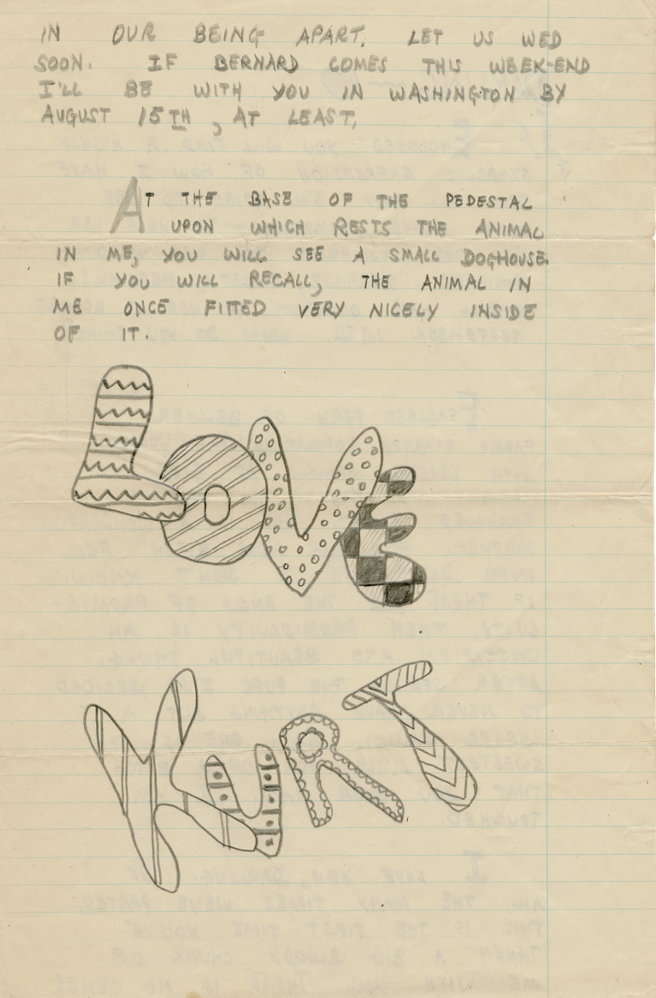 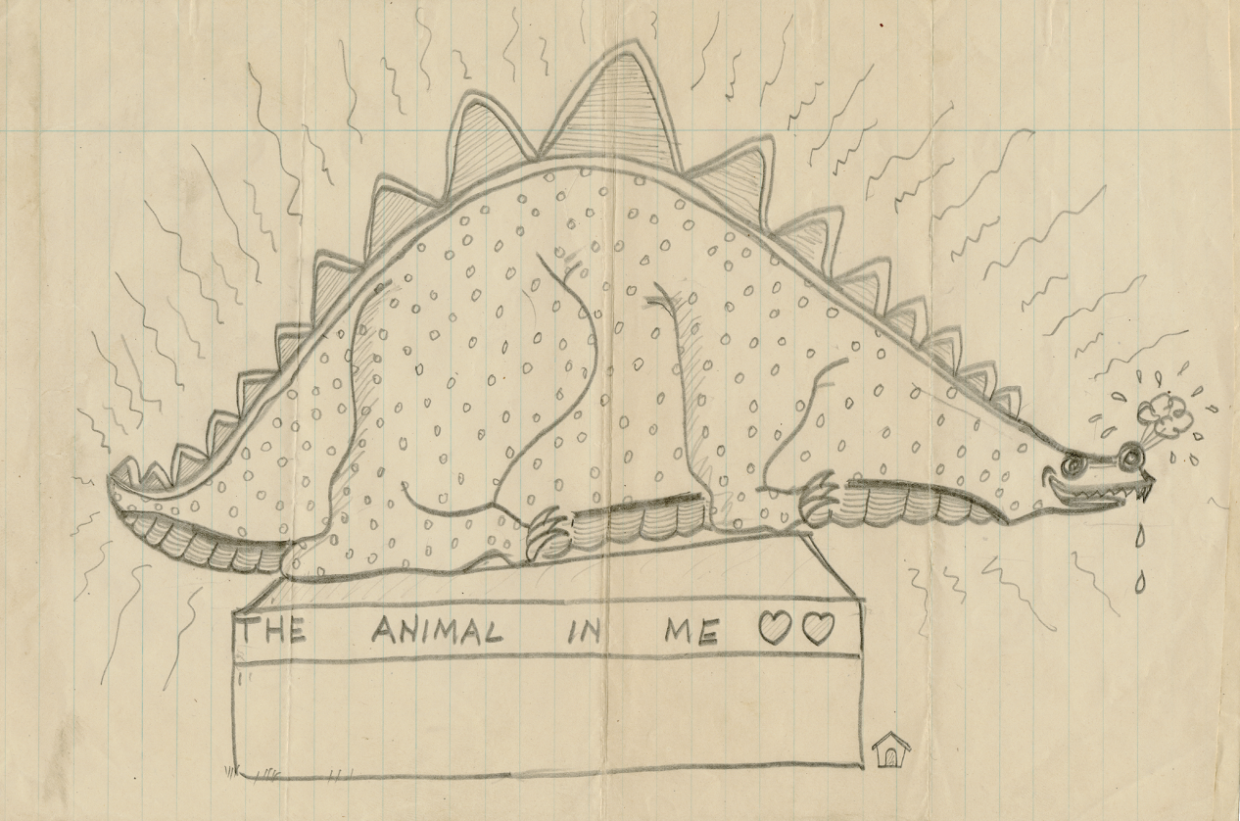 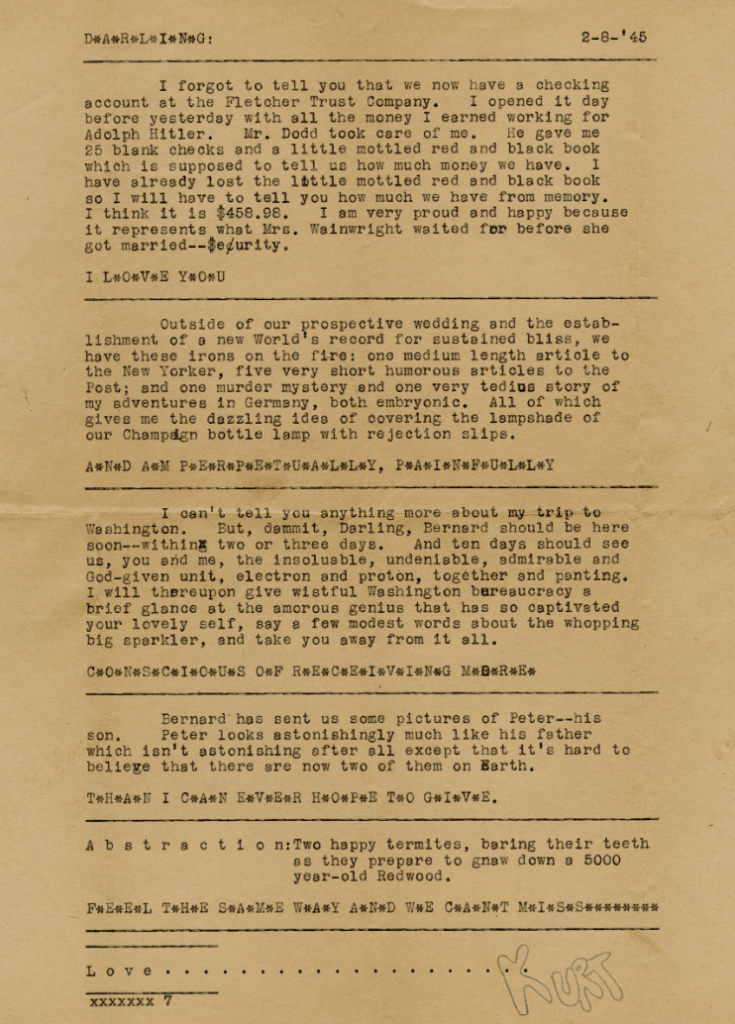 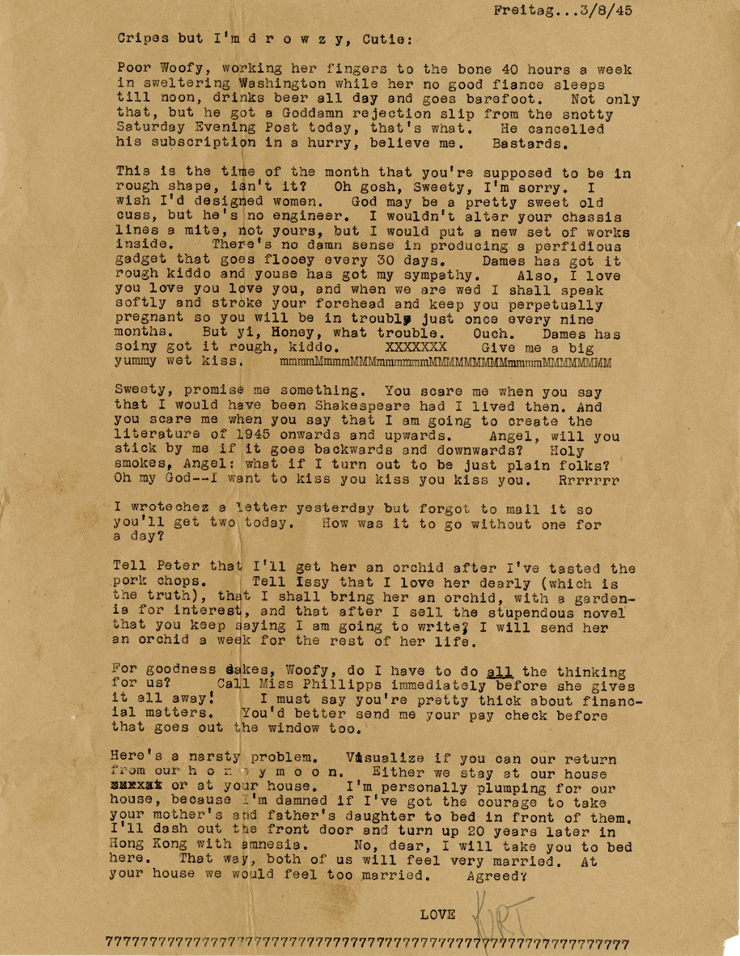 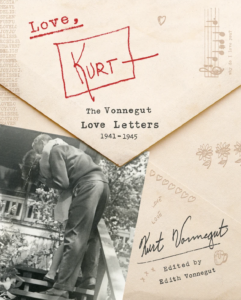 Excerpted from Love, Kurt: The Vonnegut Love Letters, 1941-1945 by Kurt Vonnegut, edited by Edith Vonnegut. Copyright © 2020 by Edith Vonnegut. Excerpted by permission of Random House. All rights reserved. No part of this excerpt may be reproduced or reprinted without permission in writing from the publisher.

Edith Vonnegut is the eldest daughter of Kurt Vonnegut, Jr., and Jane Cox. She was born in Schenectady, New York, in 1949, and raised in Barnstable, Massachusetts. She works as a painter and has exhibited in galleries across the United States. She wrote and illustrated the book Domestic Goddesses. She has also served as a contributing illustrator to The New York Times, Playboy, and the Franklin Mint. She lives in the barn behind the house she grew up in, along with her husband, John, and has two sons and two grandchildren.

On Bourbon, Books, and Writing Your Way Out of Small-Town America 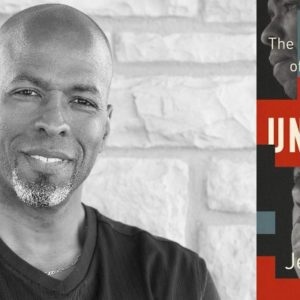 What Jeffrey Sterling Wants Americans to Understand About Whistleblowers Hosted by Paul Holdengräber, The Quarantine Tapes chronicles shifting paradigms in the age of social distancing. Each day,...
© LitHub
Back to top
Loading Comments...