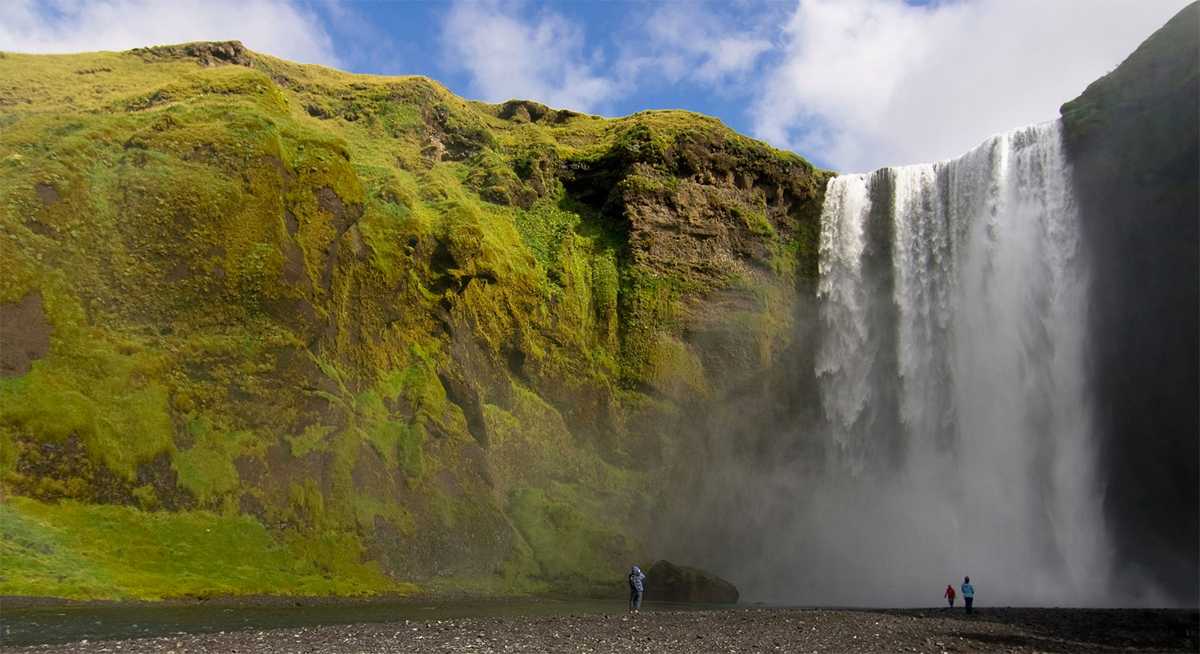 It is day one of the Iceland Writers Retreat, and Andrew Evans, a travel writer, wants to convey to our small workshop of 15 people, in a session called The Smell of Elephant Poo, ways to create a sense of place in our work. To test our writing skills, he has asked us to eat and then write a description of an Icelandic specialty called hákarl.

Hákarl is locally caught shark meat that has been fermented and then hung to dry in a cold, damp place for months. Chef Anthony Bourdain has described it as “the single worst, most disgusting and terrible tasting” thing he has ever eaten. Dice-sized pieces of hákarl, the colors of sashimi—cream to pink to red to purple—are passed around on a paper plate. I choose a rosier specimen and bring it to my nose: it smells of rot, and urine, and otherness.

I am about to consume carrion.

I place the cube of hákarl on my tongue and bite. Eating hákarl is like chewing a single fibrous pilule into which the flavor of an entire carcass of has been distilled. It has the texture of a toughened scallop and the karate kick of Limburger cheese.

A few days later, I observe in my journal that an encounter with hákarl is not quickly or easily got over. The scrap of rotten shark meat glowed in my stomach with ammonia heat for hours. But it also colonized my memory. Days later, weeks later, a whiff of fish—good fish, fresh fish—resurrects the taste and texture of hákarl. It occurs to me that there is something of this in how writers turn experiences and memory into imagination and words.

My first novel was published in 2005 and my second in 2009. At the start of 2014, my third book, a novel on the theme of death, had the unruliness of mercury. It could not be grasped. It would not take shape. I was pleased enough with the theme, setting and characters, but the structure remained unsettled and the question of form seemed increasingly unresolvable. A writing retreat struck me as a means to get a more solid grip on the slippery fish of this novel.

Iceland was an easy choice. I had an Icelandic grandmother, Agnes Sigurbjorg Peterson, and grew up hearing phrases in its baroque language and eating specialties of its cuisine dating to the early 1900s, when my great-grandparents Daniel and Thora left with their growing family to settle on the western shore of Lake Winnipeg, in Manitoba. Daniel and Thora sleep softly now in the Gimli community cemetery, awaiting the trumpet call. “Sofðu vært hinn síðsta blundinn” reads their headstone.

I had also already discovered and admired the flinty novels of Halldór Laxness, and the works of the poet and novelist Sigurjón Birgir Sigurðsson, known as Sjón. Iceland, home of the sagas, has one of the most literate populations in the world. It is said that one in ten Icelanders has or will publish a book. One of my own ancestors, Sigurdur Jonsson (1802-1860), is still remembered as a skald (bard) at Stora-Hvalsa on the northwest coast of Iceland, on the cold Norwegian Sea.

In the days leading up to the Writers Retreat, I traveled with Vancouver writer Claudia Casper into Iceland’s uncanny, changeable scenery, west of Reykjavik to Snaefellsnjökull National Park and north to Stykkishólmur. We relished our encounters with forthright, never ingratiating Icelanders. Snorri, unshaven, handsome, laconic, took us snowmobiling on the Snaefellsnjökull glacier, after mentioning that many people, Icelanders and tourists, are lost each year into its unseen crevices. We followed exactly in his tracks like imprinted ducklings. Several times we stopped our rented car in the middle of a blasted volcanic landscape to marvel at hotspring-fed oases of flora and fauna. We walked through a stunted forest and got almost close enough to touch the tail feathers of the placid white ptarmigan that roosted at its centre. (An Icelandic joke: What do you do if you get lost in an Icelandic forest? A: Stand up.)

Workshop participants come from as far away as Singapore, and range from beginners (whose unwritten books, they must intuit, remain perfect for so long as they hesitate) to professional writers of all kinds: novelists, poets, journalists, playwrights.

Eliza Reid co-founded the retreat on a dark winter day in 2012, with Erica Jacobs Green, now a Senior Editor at National Geographic. I met Eliza and Erica when I attended the first retreat in April 2014, and Eliza and I have stayed in touch—both of us Canadian and both of us passionate about writing and reading. When we connected last month, our Skype session was delayed for a half hour while she received “training on using the panic button”—part of the learning curve since her husband Gudni Johannesson was elected President of Iceland, making her Iceland’s First Lady as of the beginning of August.

Originally from the Ottawa Valley, Eliza has lived in Iceland since 2003, after she and Gudni met as students at Oxford. They have four young children, aged two, five, six and eight. When we spoke, she was preparing to make the move to Bessastaðir, the official residence of the President of Iceland, outside Reykjavík. “The residence is further away from the kids’ schools and our routines,” she told me. “We live fairly centrally now. The children will have to change schools and they won’t be able to run and knock on friends’ doors anymore.”

She had just returned from a five-hour photo shoot for a women’s magazine and mused about her new role, in which she sometimes finds herself judged on what she wears.

“Why is it not an issue for my husband to wear the same thing two days in a row, while it is for me?” she said, thoughtfully, adding that she doesn’t plan to give in. “I won’t make any large changes. Maybe I’ll take five minutes more getting ready to go out, and wash my hair every day. This is a chance to showcase that nothing will change for women unless we call that out. We want to try to set an example for our children, while of course remaining respectful to the institution. “

She was also bemused by the indirect nature of her new role. “I’m finding it interesting to be so much in the media spotlight not because of something I’ve done but what he’s done.” She quickly and sincerely adds, “I am of course immensely proud of him.”

Reid is pleased with the ongoing success of the retreat. “There are more participants, more teachers, and more workshops. We still maintain a small group atmosphere, with no more than 15 in each workshop, and we have a convivial, egalitarian atmosphere. The faculty is part of the group, not separate. We don’t pay the featured authors enough to have egos. We have a rule that everyone has the same perks, take it or leave it.”

She and Green have added to the retreat since I attended in 2014. There are more regional tours and receptions. Participants can now attend with or without accommodation, and there is more financial support for those who need it. The winner of an annual writing competition attends free, although must pay for the flights. In addition, an alumni-funded award based on merit and financial need covers both airfare and fees for one or two participants. This year, the award brought over a writer from LA who had never before been out of the US, and another, a single mother from South Africa.

They come to a country that deeply values writing. “This is a place with a deep respect for writing as a profession, and for writers as people,” Reid observes. “A woman who attended the first year told me, ‘When you are in New York, if you say you’re a writer, the first thing you get back is “What’s your real job?  How do you earn a living?”’ But in Reykjavik, they say ‘Okay, cool what are you working on?’”

She says the retreat helps participants move forward as writers, and also broadens the context of their work. “They tell me, ‘I was in a rut, but this has got me going.’ Or, ‘I’m setting my next novel in Iceland’ or ‘I’m adding an Icelandic dimension.’”

The fish that is my third novel unfortunately continues to elude me. A few months after the retreat, I put it aside in favor of collecting and editing a book of my mother’s writing advice, which was published in April.

But I have not given up on a hákarl-aided book of my own. I wait and place my trust in the Icelandic phrase, “You are always walking with a book in your belly.”

Anne Giardini is the author of two novels, The Sad Truth about Happiness (HarperCollins, 2005) and Advice for Italian Boys (HarperCollins, 2009) and is the editor of Startle and Illuminate: Carol Shields on Writing (PenguinRandomHouse, 2016). She lives in Vancouver, British Columbia. 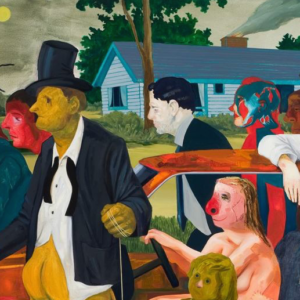 The mournful repetitions of Emily Brandt's stunning new prose poem break open a world of American suburbia. Behind and around the...
© LitHub
Back to top