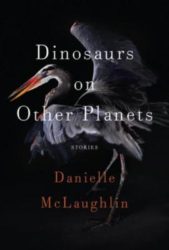 The following is an excerpt from "All About Alice," a story from Danielle McLaughlin’s collection, Dinosaurs on Other Planets. McLaughlin’s stories have appeared in The New Yorker, The Irish Times, The Stinging Fly, and various anthologies. She lives in County Cork, Ireland.

August was heavy with dying bluebottles. They gathered in velvety blue droves on the windowpanes and beat their gauzy wings against the glass. They squatted black and languid along the sills. Alice slouched low in an armchair in the kitchen, watching her father’s curious ballet. The bottoms of his trousers, rolled high above his ankles, unfurled a little further with every stumbling jeté. His newspaper carved frantic circles in the air as he struck at the flies.

Maddened, the bluebottles looped like Spitfires. They ricocheted off the lampshades and pinged off the cabinets that held Alice’s Irish dancing medals. One came to rest, dark and glittering, on the television. Thwack! and a fly dropped to the floor. Alice stared out the window as the kitchen rang with the crunch of bluebottle on linoleum.

Outside in the yard, Sunday had stilled the galvanized roof of the bathroom extension, taking away the rattle of passing lorries and leaving instead a dusting of early leaves that settled along the ridges. A stray plastic bag fluttered in the bushes inside the gate. Alice’s father flopped into his chair, flushed and triumphant. He brushed a translucent wing from the front of the sports section and turned the page.

“More tea, Daddy?” Alice made no attempt to reach for the teapot. Her father never had more tea. On the table beside him, his pills were lined up in dazzling technicolor. Alice glanced at the clock. Half past ten. At four o’clock her father would catch a bus to West Cork to holiday for a week with his cousin, Olive. His suitcase had been standing in the hall for the past three days. Alice, too, had been marking time, counting the days, giddy at the prospect of having the house to herself. She was forty-five.

On Monday morning, in her first act of delinquency since her father’s departure, Alice hung flypaper from the ceiling. Her father hated flypaper. Soon there was a dead bluebottle twisting overhead as Alice drank her tea. After breakfast, she took the dishes to the sink, leaving them to soak in a pan of scummy water. On a shelf above the sink was a photograph of a reproachful-looking woman in her midto late sixties, hair pulled back in a tightly wound bun. Her eyes, like Alice’s eyes, were gray flecked with green. A man had once told Alice that her eyes were the color of a storm at sea, but the eyes that stared out from the photograph were sunken and passive. Poor Mammy.

Alice took a mug of tea out to the good sitting room. She examined her reflection in the mirror. Her time away had brought lines and shadows that deepened with every passing year. She sat on the sofa, its floral print faded from dust and sunlight, and thought about what she might do. A whole week stretched in front of her: a Wild West of freedom, waiting for the charge of Alice’s wagon. There came to her then a memory, a fragment of a morning from many years ago: Barcelona with sun angling through a chink of white curtain, the crumbs of yellow madeleines scattered across her plate at breakfast. And afterward the city, vast and glorious, shimmering in front of her.

Alice felt hope stir in her stomach, felt it slosh gently with the tea. She wanted to leave her life like a balloon leaves a fairground. To slip from life’s sweaty hand and float away. She looked at her watch. She thought of her father walking the beach with Olive, stepping on bubbles of black seaweed, hearing them pop. Time was ticking. She went over to the window, looked out at the straggle of gray buildings along Main Street, and wondered again what she should do with the day until at last it came to her. She would make a batch of queen cakes and take them down to Marian’s.

“It’s not all romance, you know, Alice. You’re thinking, there’s Marian with her perfect house and her perfect husband and a brand-new Fiesta outside the door. Well, I’ll be straight with you, Alice, since you’ve asked: It’s not all moonlight and roses.”

Alice was fairly sure she hadn’t asked. Marian had answered the door with the new baby over her shoulder and the toddler around her ankles. Now she was moving in a slow waltz over the kitchen tiles, a tea towel under her foot, mopping up baby-sick. With every turn, the baby dripped more vomit over her shoulder.

Through the patio doors to the garden, Alice could see sunlight dancing off the silver cover of the barbecue and warming the varnished oak decking. It highlighted the tasteful creams and taupes of the patio furniture and lingered among the late-summer flowers that bloomed in terra-cotta pots. Since Marian had married Eugene it was all “barbecues” and “suppers” and stainless steel patio heaters. Alice smoothed down her new sequined top and waited for Marian to admire it. But today Marian was missing her cues, fluffing her lines. She was more preoccupied than usual with the dribbled demands of the children.

“Issy good boy? Issy? Yessy issy!” Marian was hunched over the baby on the sofa, changing his nappy. “Toe-toes, toe-toes,” she said, putting the baby’s pink, dimpled foot to her lips, pretending to eat it. The baby wriggled in delight, gurgled, and Marian nibbled at his toes and laughed back at him. Alice boiled the kettle and searched the cupboard for a clean plate for the queen cakes. She began to arrange them in neat circles.

“Where do you keep the tea bags?”

Marian took the baby’s foot out of her mouth and looked around, disoriented. It was as if she had forgotten all about Alice. “Eugene won’t have them in the house,” she said. “Carcinogenic.”

“Yes, even the organic ones. Would you believe it?”

Marian put the baby wriggling on his back in the playpen, then scooped the toddler off the floor and set him down next to the baby. She made a pot of loose-leaf tea and sat down opposite Alice.

“Thanks for the muffins.” It was always “muffins” with Marian these days. Marian never said “queen cakes” anymore, now that she was married to Eugene.

“Daddy’s away this week,” Alice said.

Marian picked up a carton of milk, splashed some in her tea. “Like what?”

Marian sighed, mopped up cake crumbs with her finger, popped them in her mouth. “You mean a man?”

“The trouble with the men around here, Alice, is that they all know you.”

“I thought I might go up to Dublin,” Alice said.

Marian shook her head. “Too dangerous.”

“Too many time wasters.”

Alice felt the morning’s hope begin to curdle in her stomach. She tried again. “I could go to a nightclub.”

“On your own?” Marian was talking with her mouth full. “There’s a lot expected of a girl nowadays.” She gave Alice a meaningful look. “Stuff you’ve never even heard of.”

Marian, Alice thought, was talking as if she were the only one in this town who ever had sex. Talking as if she knew all about Alice. Alice wanted to tell Marian that last night she had made love out in the back of the town hall to a sound engineer from somewhere foreign, tattoos all over his body. She hadn’t, of course. Last night Alice had fallen asleep in an armchair and had woken cold and cramped in the small hours, a mug of stale tea on the table beside her. The truth was that Alice had not slept with a man in four years. And Marian, like everybody else in this town, really did know all about Alice.

Alice had reached the bottom of her teacup. She was afraid to look in case a pattern might form among the leaves. She was afraid she might have the gift. Poor Mammy had the gift and much good it did her. Instead, she looked across the table at Marian, at the dark circles beneath her eyes, the greasy hair, the baby-sick on her cardigan. She saw with sudden clarity the desolate wasteland of her friend’s ruin and, just as clearly, saw it mirror her own. She felt the sun wane, felt the evening and the kitchen closing in.

A whole day had slipped away from her. “Does Eugene have any friends?” Alice felt a fragment of queen cake lodge in her throat at the mention of Eugene, that beige, insipid man. The children were wailing now and Marian was back at the playpen, a grizzling baby over her shoulder. The toddler began to choke, and Marian stooped to take a plastic cow from its mouth. When she straightened up again she said: “There’s a couple of new guys on the soccer team. They’re coming over tomorrow evening for a barbecue. You could drop by, see what happens.”

She sat down opposite Alice again with the baby on her knee. She stood the plastic cow, still glistening with spit, on the table between them. “These are young lads up from Limerick,” she said. Her eyes left the soft fuzz of the baby’s head for a moment and fixed on Alice. “They don’t know anyone around here.” She looked away then, out through the patio doors to the garden where a breeze was buffeting the flowers in the terra-cotta pots. “All I’m saying,” she said, “is play your cards right. There’s no need to go telling them your age. No need to go telling them anything.”

Excerpted from “All About Alice” from DINOSAURS ON OTHER PLANETS. Used with permission of Random House. Copyright © 2016 by Danielle McLaughlin.

To All the Characters I've Killed Off, Who Haunt Me Still 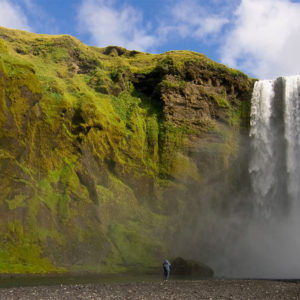