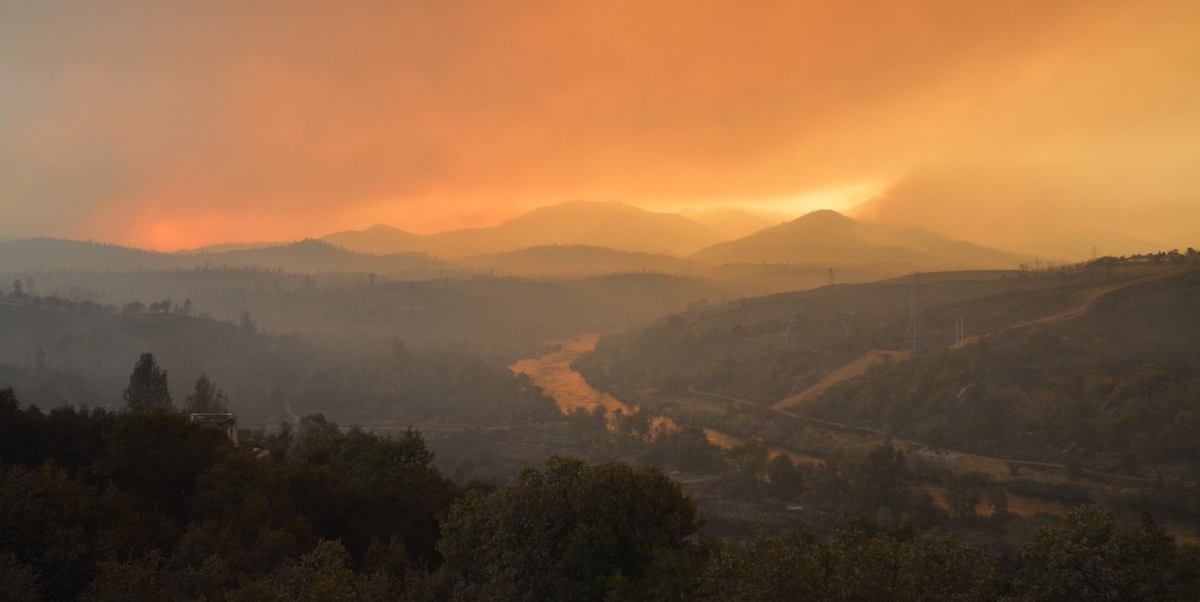 Dystopia and Shame: On the Road with California’s Climate Migrants

Jaime Cortez on the Disaster We Created

My evening commute takes me north on Highway 280 towards San Francisco. One hundred and fifty miles to the east, Paradise is burning at the heart of the largest wildfires in California’s long and storied history of fires. The thick smoke, which blankets the entire region for hundreds of miles, contains the particulate remains of Paradise. It occurs to me that in unison, millions of us are inhaling the sofas and ottomans of Paradise, the cars and gas stations of it, the trees and lawns, the clothes and detergent, the wedding pictures and divorce papers, the cadavers. This thought comforts and discomforts me as I drive through the evening traffic.

I need to use the bathroom, so I pull over at the Crystal Springs Highway Rest Area. The rest stop used to be notoriously cruisy, drawing gay and temporarily gay men from around the region with the promise of nocturnal sex in the bathroom stalls, in the cars, or on the trail that winds up the scrubby adjacent hillside. Increased surveillance of the rest stop, and finally a mini police station planted near the bathrooms, put an end to the nightlife. The now-chaste rest stop is packed. Its parking lot is sizeable, with room for thirty or forty cars, but every parking spot is occupied. I find a patch of roadside and improvise one. I walk to the bathroom, and there is not one person in there.

The whole rest stop is jammed full of cars, but no one is using the bathrooms. “But it’s a rest stop,” I think. “It’s all about bathrooms, isn’t it?” Evidently not. On my way out, I see through the open door that no one seems to be using the women’s bathroom either.

We did not ask for this, but we chose this. Through our action and inaction, we chose those fires, that smoke, and this displacement.

I walk back to my car slowly, and I notice now that one car after another is packed to bursting with stuff. There are pickups with their beds stacked high with blankets, bicycles, boxes, and chairs, Beverly Hillbillies–style.

My nosiness is piqued. I slow my walk to a near shuffle and assess each car. I see a woman in an old Civic bundled up in the fully reclined passenger seat. She is turning about in her blankets, trying to find a comfortable position to settle in for the night. She sees me looking fixedly, and I feel a small wave of shame rise and break in my chest. I have been busted being morbidly nosey. I witnessed this act of settling in, this act that is normally so intimate, to be seen only by the eyes of your kin or your lover. Next door, in a little red pickup with a rusted hood and bumper, I see someone’s hands adjusting a metallic folding windshield sun screen for privacy. The overhead LED lights shine through the windshield, reflecting off the silver screen, and the hands seem those of a deft puppeteer in a sad, surreal cabaret.

I see a bearded man with a steaming paper cup of something sitting on his car hood and chatting with a second man in the passenger seat of the neighboring car. I eavesdrop. Their chatter is a bit of nothing about the brisk weather, the smoke. Backlit by lights from the rest stop map kiosk, their words exit their warm bodies and become delicate vapor genies that dissipate into the darkness.

Shit. I finally understand. The parking lot is either a longtime encampment for car-dwelling folk, or an ad hoc way station for refugees from the epic fires engulfing Paradise and the neighboring areas of Butte County.

I stand there for a moment, and take in a big breath of smoke-tinged air, and I am stunned by how deeply dystopian this scene is. The dirty twilight air. The car people battered by inequity and priced out of proper shelter. The people who gazed into the burning eye of climate change and fled for their lives.

We did not ask for this, but we chose this. Through our action and inaction, we chose those fires, that smoke, and this displacement. We are all paying for it, though these people are paying more dearly than the rest of us. Of course I am complicit in this, just like everyone else. Of course I can do better. Of course. Of course.

I feel a dull, leaden weight on my shoulders. I turn my face towards the hillside. The gate to the uphill trail is locked for the night, but I mentally vault over it and take the short hike up to the vista point, where a hulking statue of the 18th-century Franciscan monk Junipero Serra awaits. Serra is bowed down on one knee, but the statue of the colonial missionary is still of heroic scale, perhaps twenty or more feet in height. His right arm is raised. His forefinger is pointed towards a polluted sunset of such lurid and awful beauty that gazing upon it gives me the dread of a marooned astronaut, emerging from his smoking capsule and pondering the heavy descent of the first, unknowable night.

Jaime Cortez is a writer and visual artist based in Northern California. His fiction, essays, and drawings have appeared in diverse publications that include No Straight Lines, a forty-year compendium of LGBT comics (2012, Fantagraphics Books); Street Art San Francisco: Mission Muralismo (2009, Abrams Press); and Infinite City, an experimental atlas of San Francisco (2010, edited by Rebecca Solnit for University of California Press). Jaime is currently working on a short-story collection. 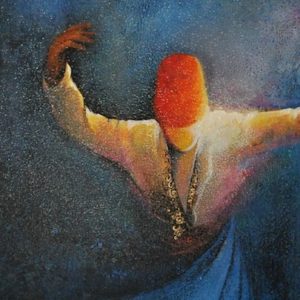 Rumi Priestly Poet of Love and Master of the One Liner Rumi was a master of the one-liner, or, in the parlance of classical Persian poetry, pearls. Of all the one-line pearls he strung...
© LitHub
Back to top
Loading Comments...