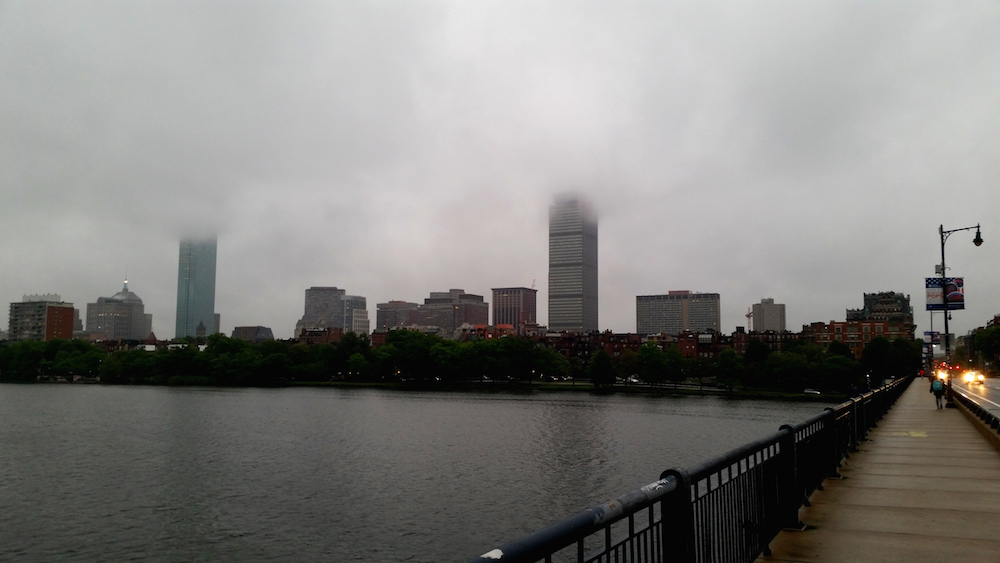 From the Lecture Hall to the Bar

It’s an exceptionally gloomy June evening in Boston, and I’m making my way down Newbury Street, sheltering under an umbrella, thinking the weather couldn’t possibly be more appropriate for the event I’m about to attend. I feel like I should be wearing a trench coat and a fedora instead of a dripping hoodie and rainbow rubber boots as I stride through the fog, bound for Trident Booksellers & Cafe and “Noir at the Bar.”

“Noir at the Bar” didn’t originate in Boston, but it makes sense here. Given our fondness for grit and gore, from Edgar Allen Poe to Robert B. Parker to Dennis Lehane, and our propensity, as one of my colleagues puts it, to do everything in bars whenever possible, we’re the perfect city to host an event where a bunch of people read their crime fiction and everyone else listens with beer in hand. And Trident is the perfect bar for this because, of course, it’s a bookstore, too. 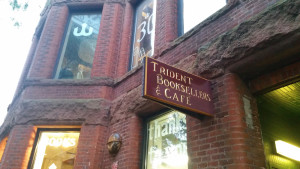 Historically, “Noir at the Bar” events have taken place at bars that are just bars, but a bar with a full­fledged bookstore downstairs (or, more accurately perhaps, a bookstore with a full­fledged bar upstairs) seems to me to be an improvement on the theme. After all, at Trident, you can stroll back to the first floor after the event to pick up a copy of one of the authors titles, or browse the mystery section before heading back into the night.

I anticipate that it will be busy inside, and sure enough, I step over the threshold into the bustle of conversation and laughter of people ducking out of the rain to peruse the shelves or relax in the downstairs cafe. Resisting the call of the stacks, I head upstairs to the bar. Here, too, the room is almost full. I settle myself at a high top in the back, order a cappuccino, and wait for the festivities to begin. Outside the window to my left, the sky darkens and the rain continues to fall. 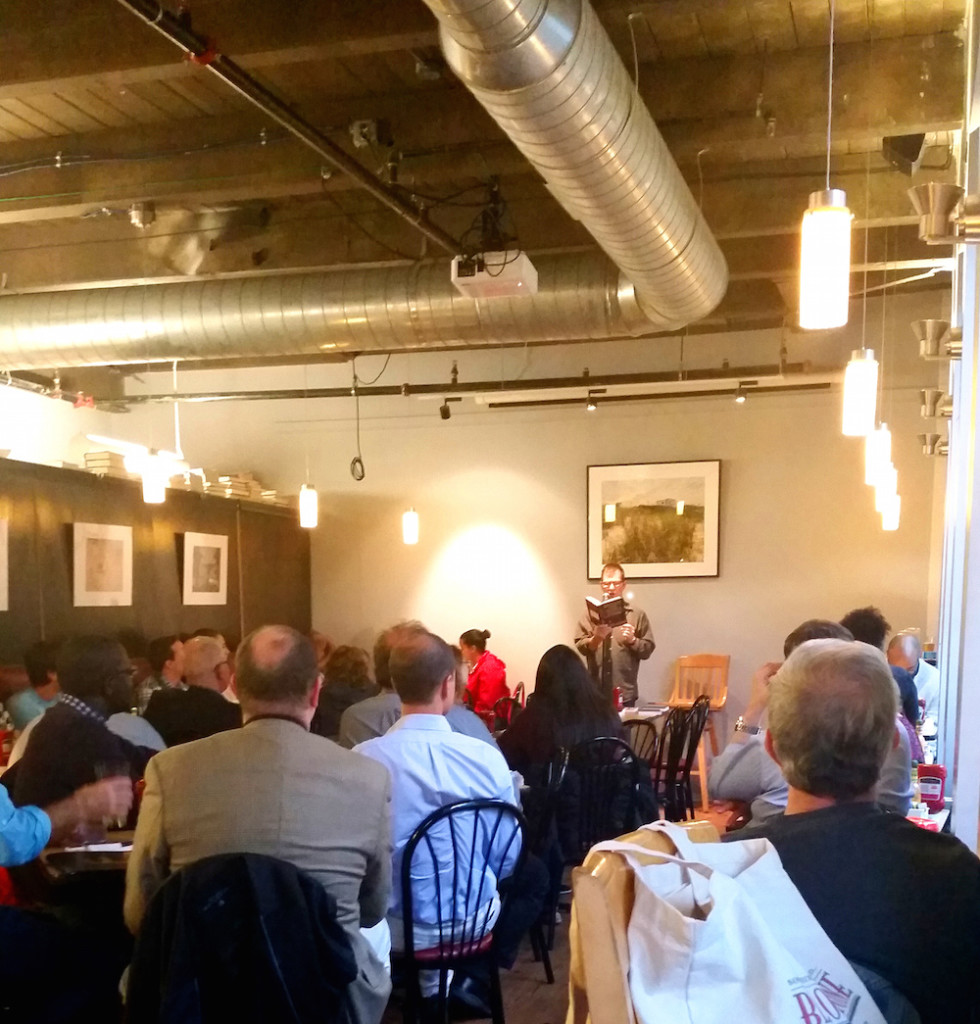 There’s an eclectic mic of writers reading tonight. Given that the kind of writing we’re here for is pretty much built into the event, I’m surprised by the variety of styles and subgenres represented. There’s the man who drowns his father and then has an extremely unfazed conversation with his brother about it, the woman who accepts a job against her better judgment and wakes up a sex slave in her boss’s basement, the man who rescues a puppy from a crack den—I’m not an expert in the field, but I’d say that over the course of the evening, we’re treated to mystery, crime, horror, and noir, at the very least.

Later, as I make my way home, I’m still caught up in the noir atmosphere. The city skyline is shrouded in mist, skyscrapers disappear into the clouds… As I cross the Mass Ave Bridge I decide I’m going to reread The Maltese Falcon.

Here in Boston’s literary world, we like our variety. We like our bars, we like our bookstores, and we like our colleges. We like to lounge around, drink in hand, listening to casual readings of criminal tales, but we also like sitting in auditoriums while smart people tell us about things. And so, on a meteorologically similar but not quite as thematically appropriate evening a few days later, I’m seated in Lesley University’s Marran Theater at an altogether different sort of event. It’s Lesley University’s MFA in Creative Writing Residency Readings, and we’re here for the headlining lecture: Gish Jen, local literary legend and acclaimed author of World and Town and Tiger Writing.

In her introduction, fellow author and Lesley professor Rachel Kadish alludes to Jen’s “several suitcases of awards” and tells us how the two of them bonded years ago discussing literature and life and how to balance the two. “She writes fearlessly across boundaries,” Kadish says. She brings us “from laugh-out-loud funny to heartbreak to laugh-out-loud funny again.”

Every once in a while, I’ll go to an event that makes me wish I were back in school; I’ll start to feel those rusty cogs turning again and find myself wishing I had more excuses to use my brain that way. This evening is one of those. Gish Jen is like every favorite professor you ever had—she’s smart and clear and funny and she sends you home wanting to know more. 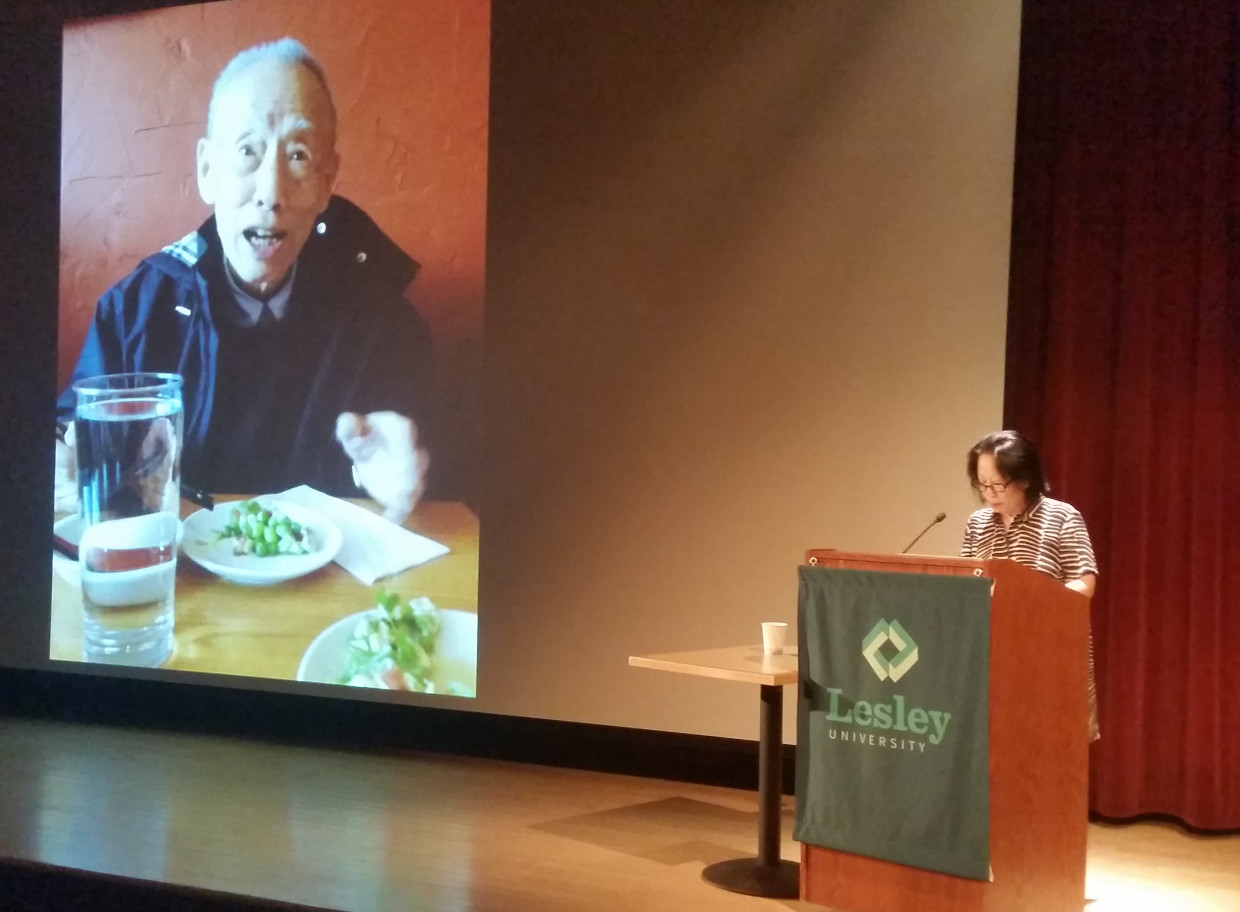 Most of her talk tonight centers on the themes of Tiger Writing: Art, Culture, and the Interdependent Self, her most recent title and first foray into nonfiction. She’s interested in how Eastern and Western cultures’ differing emphasis on interdependence vs. independence affects the ways we think and talk about ourselves and our art.

We hear a bit about visual art but the bulk of the lecture focuses on the written word, a fact which is certainly appreciated by her audience full of MFAs and other bookish types (myself included). According to Jen, the Western focus on independence and individuality accounts for our highly character-­driven style. She quotes Orhan Pamuk’s wry remark: “People do not actually have as much character as we find portrayed in novels. . .  Furthermore, human character is not nearly as important in the shaping of our lives as it is made out to be in the novels and literary criticism of the West.”

That same focus on the individual experience, Jen continues, drives the concentration and popularity of autobiographical writings in Western culture to far exceed any other. She explains that the Eastern interdependent mindset makes writing about oneself much more challenging. Jen’s own father, who decided to write his memoirs shortly before he died, still managed to do so almost without actually writing about himself at all. Even Salman Rushdie found he couldn’t bring himself to use first person in his own memoir, and so had to write it in third, instead. And this is Salman Rushdie, she adds with a laugh. We all know he’s “not at all narcissistic.”

When we break for questions and the house lights come up, there’s the usual cohort of audience members who seem confused about the difference between a question and a comment and a monologue (this is a particular hazard at university events), but Gish Jen is an old pro and handles it all gracefully. One gentleman describes an event at the publication of Tiger Writing, in which Jen and local bakery owner/cookbook author Joanne Chang interviewed each other about career, vocation, writing, and cooking. Jen smiles and says it was one of the most unique and enjoyable events she’s ever been a part of, and, having seen both women speak separately, I’m inclined to believe her.

There are questions about her father’s memoirs (“Why do we have pages and pages and pages about your house?”), ancient Chinese teapots (“Porous is an advantage”), the American publishing industry (“My editor is always saying, ‘I see you cut b lank. I rather liked b lank.’ ”), and training the Western audience to appreciate communal narration (“Literature is just the tip of the iceberg. We’re not the world.”), but it’s when a young MFA student asks about writing outside your own culture that she really hits her stride. “Read every. Single. Thing. Available,” she says. “Talk to everyone.” And then, before you actually start writing, “try to forget everything.” She doesn’t write from her notes because it takes the life out of her prose. “It has to live,” she says. “You have to absorb it and it has to be in your dreams.”

As the evening is tapering to a close, Gish Jen laughs and says she knows she’s writing and talking about interdependency and Eastern thought and the collective vs. the individual, but she’s an American, too. “I was born here, I’m a novelist. Here I am, yack yack yack!” We laugh along with her, but if the rapt expressions on the faces around me are any indication, I am not alone in thinking that I’d listen to her yack yack yack all night long if I could. 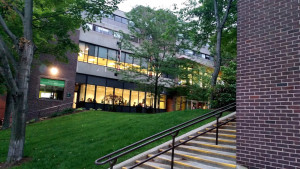 But all good things must come to an end, and so a short while later I’m headed home through the fog yet again. My mind is buzzing, but instead of fedoras and trench coats and The Maltese Falcon I’m thinking about interdependence and communal narration and writing across boundaries. Just another literary night out in Boston.

Serena Longo is the Boston Correspondent for Lit Hub. She spends much of her time talking about, writing about, and selling books for her job in the marketing department at Harvard Book Store in Cambridge, MA. She can also be found blogging (about books, of course).
http://readfive.wordpress.com 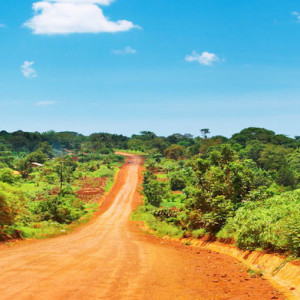