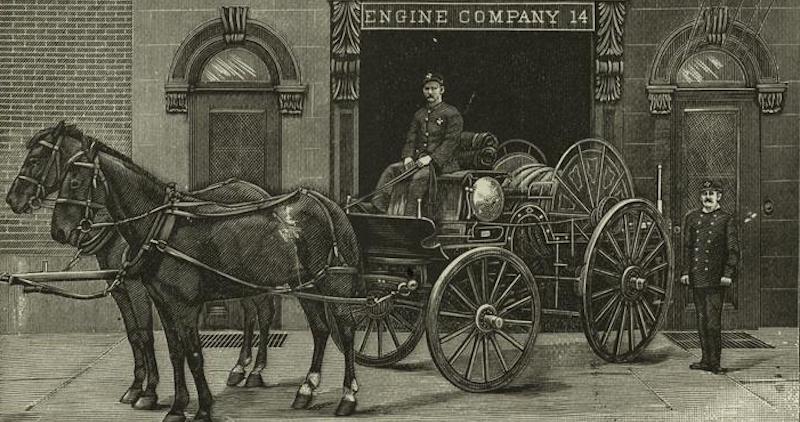 Historians point to 1865 as the birth of the modern New York City Fire Department. It was then that reform politicians replaced a patchwork of volunteer departments with a paid force called the Metropolitan Fire Department. Before that, the volunteer fire brigades acted like rival street gangs. Intensely territorial, they would battle each other, sometimes while a building was burning, for access to the limited water sources like hydrants, and the glory that awaited the brigade that put out the fire.

In 1850, government officials divided the city into eight districts, each with its own “fire tower” that would alert brigades to a fire by ringing a bell. Only two brigades were supposed to respond to the fire, but the ordinance did little to smother the smoldering animosity between the volunteer departments. One letter to the New York Times in 1865 about volunteer departments read in part, “And all classes of the community, except the ‘roughs,’ are shocked and disgusted by the horrible scenes of disorder attendant on every fire in New York—the shrieking, yelling, hallooing, confusion, absence of all discipline and subordination.” However, it was a riot in July 1863 and not a published complaint that sounded the volunteers’ death knell.

The Civil War was unpopular in many quarters of New York City, especially among the city’s working class, who believed Black men, a portion of whom had escaped the slavery of the South, were trying to take their jobs—they called the war between the states “Lincoln’s Ni**er War.” Many volunteer firefighters, some of whom worked on the docks and as skilled laborers, vehemently opposed the war.

The genesis of what would become known as the Draft Riots occurred in March 1863, when the U.S. Congress passed the Conscription Act, the nation’s first federal draft. Up until then, because of the service they provided to the community, volunteer firemen in New York City had been exempt from being drafted into military service. The Conscription Act did away with that exemption. The first round of the Civil War draft lottery included several members of the “Black Joke,” a name taken from a bawdy Irish tavern song, and an all-white and particularly violent fire brigade. It was then that the simmering anger against the war and Blacks exploded into the bloodiest civil unrest in U.S. history.

The Draft Riots were the final straw for the Republican-controlled New York state legislature. In 1865, state lawmakers replaced the citizen fire brigade with the Metropolitan Fire Department.

According to some historians, the riots began when members of the Black Joke descended on the draft office and set it on fire. Over the next four days, the riots held lower Manhattan in a bloody grip. According to some estimates, over fifty thousand became involved in the fighting. President Lincoln had to send in federal troops to impose martial law. Though the estimates vary, when all was said and done, some estimates said over a thousand people lay dead, including hundreds of Black men, women, and children who were murdered because of their race.

The Draft Riots were the final straw for the Republican-controlled New York state legislature. In 1865, state lawmakers replaced the citizen fire brigade with the Metropolitan Fire Department. Though volunteers made up the bulk of the new department, one of the first orders the department gave them was to forcefully remove from the firehouses those volunteers who didn’t become part of the paid force. As you might imagine, these evictions didn’t go smoothly, and brawls were commonplace. Though the paid fire department would eventually win out and its arrival would mark the end of the volunteer brigades, a fire in July 1865 proved to be an appropriate epitaph to the most colorful era in New York City’s fire service history.

P.T. Barnum’s American Museum in lower Manhattan was one of the country’s most popular attractions and is still known as perhaps the most bizarre in the history of New York City. Along with animals of every stripe, including two adult whales kept in water tanks, Barnum’s museum was home to a host of circus performers, from tiny Tom Thumb to the Gigantress, a woman purported to be eight feet tall and weighing four hundred pounds.

The fire began in a basement office around noon, perhaps from a discarded cigarette, and spread quickly to the upper floors. Two competing fire brigades ran alongside horse-drawn apparatus. It’s not too far of a stretch to believe, as they arrived on the scene, that they immediately knew the fire was going to be one of epic notoriety. So of course there was the obligatory brawl for first dibs to fight it.

Meanwhile, flames shot from the museum’s windows while scores of monkeys who’d escaped the conflagration ran past them and disappeared down the cobblestone streets of old Manhattan, some “never to be seen again,” according to one report. The volunteer firefighters were right about the notoriety. Thousands of New Yorkers watched the fire and the antics of the volunteers from the street. According to historians and newspapers of the day, volunteer fire eaters carried wax figures out of the blaze, believing they were human. One of them threw a likeness of Jefferson Davis wearing a dress out of a window. Another firefighter supposedly carried the Gigantress to safety. Miraculously, no one was killed inside the museum. The two adult whales, however, were boiled alive in their tanks.

New York City’s fire service would be known as the Metropolitan Fire Department for only three years. In 1868, New Yorkers elected John T. Hoffman as governor, the only former New York City mayor to accomplish that feat. Hoffman was a Democrat with ties to Tammany Hall, the crooked and powerful Democratic political machine that represented New York City’s immigrants and working class. Perhaps the person most thrilled with the election of Governor Hoffman was the de facto leader of Tammany, William Magear Tweed, incorrectly called William “Marcy” Tweed, but known by all as “Boss Tweed.”

Colorful and corrupt, Tweed was an ex–volunteer fireman himself and had bristled when the Republican state government took control over a city agency, especially one so near to his heart. With an ally now in the governor’s mansion, Tweed had the power to push through a state charter that gave the reins to the fire service back to the city and Tammany Hall. Maybe the most memorable language in the charter, however, was the change of the name of the agency. The Metropolitan Fire Department was supplanted by the appellation Fire Department of the City of New York, which gave birth to the universally known acronym FDNY.

Thousands of New Yorkers watched the fire and the antics of the volunteers from the street. According to historians and newspapers of the day, volunteer fire eaters carried wax figures out of the blaze, believing they were human.

Of course, Tammany was responsible for a lot more than the fire organization’s famous initials. The very ethnicity and exclusionary nature of the FDNY have their roots in the Democratic machine. With the exception of the Catholic Church, there was perhaps no other institution in New York City that could trace its members’ roots back to Ireland with more frequency than the New York City Fire Department. In the late 1880s, 44 percent of the city’s population was Irish-born or first-generation Irish American. Some 75 percent of the city’s fire department was Irish Catholic. Irish Catholics also dominated the fire and police departments’ upper echelons. Thanks to Tammany, at least in civil service, the Irish had climbed the ladder.

Though some Eastern Europeans and other ethnicities managed to crack the ranks, the fire department remained mostly an Irish American entity for most of the twentieth century. It also remained nearly entirely white. A horse groomer named William H. Nicholson became the first African American in the fire department in 1898. Nicholson hadn’t planned on being a horse groomer for the department—he thought he was going to put out fires and help save people. When he showed up at Engine Company 6, however, he was told to report to the veterinary unit, where he would remain shoveling out horse stalls for the rest of his career.

Sixteen years later, in 1914, John H. Woodson became the second. Woodson’s career was marked by many transfers and a spectacular rescue of a woman and her baby from a fiery apartment. Four years after Woodson came Wesley Williams, perhaps the most qualified recruit the department had at the time. He passed both the written and physical parts of the examination with a nearly perfect score. His father, James Williams, was the head Red Cap baggage handler at Grand Central Station. His job allowed him interactions with the rich and famous, including the Rockefellers and Vanderbilts. James Williams became especially friendly with Theodore Roosevelt.

The former U.S. president wrote a letter of recommendation to the fire department for his son Wesley. Yet Tammany Hall had Williams on a waitlist for over a year while they hired less qualified white men in the meantime. Finally, on January 10, 1919, Wesley Williams received his appointment letter and was assigned to Engine 55 in the Little Italy section of Manhattan. He would be the first Black firefighter to achieve rank, but well into the 1930s there were still only four Black New York City firemen.

Aside from Wesley Williams’s career, one of the most significant events for the fire department in the early part of the twentieth century was the advent of the firemen’s union. In 1917, a Brooklyn fireman named Albert Guinness organized the Uniformed Firemen’s Association. Under his leadership, the union brought its members’ workloads down from an inhumane 151 hours a week to a two-shift system and an 84-hour workweek.

Later the union won pay raises for firemen. Guinness and his union’s rise in influence wasn’t welcomed by everyone. John Hyland, the Tammany-backed mayor of New York City, for one, saw it as an impingement on his power. Out of spite, he had Guinness transferred from Brooklyn to City Island in the Bronx, an excruciating thirty-two-mile commute by bus and subway.

To the union membership, however, Guinness remained a hero. When he retired in 1925, the union members presented their founder with a diamond-studded badge. Guinness died at fifty on March 11, 1927. Led by the department pipe band, two thousand firemen marched alongside his coffin driven by a hearse to its final resting place in Greenwood Cemetery in Brooklyn. 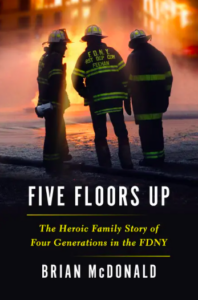 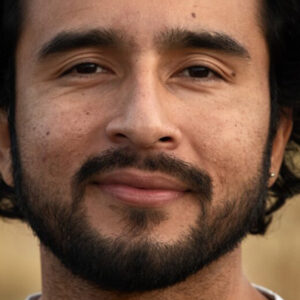 On today's episode of The Literary Life, Mitchell Kaplan is joined by Javier Zamora to discuss his memoir, Solito, out now from...
© LitHub
Back to top
Loading Comments...