Don’t You Know I Love You 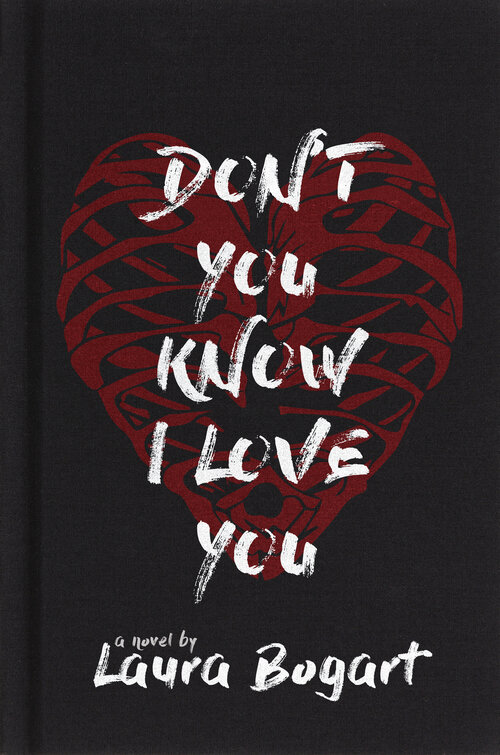 The following is an excerpt from Laura Bogart's novel, Don't You Know I Love You, about returning home and the complications of family. Bogart is a featured writer at The Week and has written for The Atlantic, The Guardian, SPIN, The Rumpus, Vulture, Roger Ebert, The AV Club, and Refinery 29 (among other publications).

When Angelina felt her bone snap, she thought of home. She was driving down Sixteenth Street, that narrow road bridging Silver Spring and Washington, DC, when the Infiniti SUV rocketed past a stop sign and smashed into the passenger side of her Honda Accord.

Angelina’s left hand shattered against the wheel: ring and pinkie fingers, bent at ninety-degree angles. Her wrist was a sausage casing, as thick and purpled as the ones her father used to jab with a fork while they sizzled in oil. Whenever she remembered him, her mouth filled with the coppery sharpness of blood. This time, she’d bitten her tongue.

Angelina had never been in an accident before. She thought it’d be louder. Her mind was like the air around a tuning fork. The starts of thoughts—what the fuck just happened; who the fuck just hit her; where the fuck was her insurance card—were sucked into the ripple and dispersed. Her right hand still held the CD she’d planned to pop in. The passenger window cracked like a spiderweb; moonlight winked in the glass strewn over Angelina’s knuckles.

When Angelina felt her bone snap, she thought of home.

Gingerly, trying to keep her wrist straight, she raised the heel of her hand off the wheel. Her purse spilled on the passenger floor; her graphite pencils were safe in their pouch, but her wallet sprawled open and her phone mocked her, half hidden under the seat.

Angelina looked into the rearview mirror, instinctively checking for any damage to her face. At the moment of impact, her temple knocked against the door, but there was no bruising. Normally, her skin was fair; now, she was a bloodless shade of pale. When she was in a mood to be kind to herself, she’d say that her features had the sleepy sharpness of a Modigliani woman: heavy-lidded and heavy-lipped, a long nose that tilted slightly to the left. At least it wasn’t her father’s “Eye-talian” nose; hers was too small and straight.

The passenger door had been crushed inward like a beer can stomped on a curb. If anyone had been riding with her, they’d be dead.

Scorched rubber choked the loamy smell out of the air. She had wrecked near a temple, alongside the little garden adjacent to the synagogue. Whenever she drove by in daylight, she saw children crouched down with their mothers, digging.

The girl in the Infiniti hadn’t bothered to open her door. She’d rolled her window down—not even halfway, just a quarter. Angelina glanced at the Infiniti’s crumpled bumper; its headlights burned through the cracked glass like tea lights in a jack-o-lantern. Then she looked back up at the girl’s face: a smear of blue eyes and lunar-pale skin, heavy curls from-the-box red.

Her car had been knocked out of alignment. Angelina nudged her shoulder against the door and popped it open.

The girl didn’t say anything back.

The passing cars moved fast enough to rattle her Accord. Angelina’s pulse beat a tattoo inside her skull; she couldn’t hear the shouts and the footfalls approaching. She stared at the girl in the Infiniti, who looked back only once—her face inscrutable, save a slight widening of her eyes—before lowering her forehead to the wheel.

A man’s voice came from her bad side. Before she even saw him, she felt his fingers on her forearm; they pulled the pain out of her wrist as if sucking venom from a snakebite and consolidated it into five even points. Angelina expected him to say he was a doctor, or that he’d been a medic in the war. Or even that help was on the way. All he said was, “It’s broken.”

She looked into his milky blue eyes and spoke in a voice that startled her: “Please, don’t let go.”

Sirens howled, and the old man released his grip. He was gone, replaced by a petite woman in a taffy-pink hoodie and matching lipstick. The woman had the heart-shaped face and exquisitely overripe features of a silent film starlet. She talked so fast, so loud that Angelina couldn’t understand her until she squinted toward her lips. “Hit you,” the woman mouthed, over and over until Angelina finally heard, “I saw her.” Angelina turned away, toward the windshield; the passenger side had splintered, but the driver’s side was whole.

“You got anything to write on?”

Angelina nodded toward the backseat. There was always a sketchbook and a trash bag filled with wire and strips of old T-shirts; also a few dozen coffee cups, and the receipts that Angelina had thrown out of her purse. She planted her left boot on the pavement. She couldn’t help but notice the woman’s green flip-flops. There was only a half-inch of dirty rubber between her pedicured feet and the broken glass.

She looked into his milky blue eyes and spoke in a voice that startled her: “Please, don’t let go.”

She flattened her manicured hand against Angelina’s chest. Angelina couldn’t recall the last time she’d been touched with such sudden intimacy. She’d never really had a girlfriend or friends who felt familiar enough for an unprompted hug or stroke of the arm. Angelina clasped her right hand around the woman’s wrist; she took deep, shuddering breaths against the woman’s palm. The woman smelled of coconut lotion and hairspray, and Angelina wanted to ball that sticky sweetness into something she could hold in her mouth.

The cop cars came before the ambulance. The first cruiser spooned Angelina’s Accord; the second blocked off the Infiniti. There were two cops, a younger, stockier guy and a taller guy who might’ve been a bit older—he had a hitch in his step, as if his left hip was haunted by the kind of ache coaxed out by a flush of humidity or a sudden chill. The kind of ache that she’d hold, now, in her wrist. Angelina watched the taller cop walk toward her, then realize that he’d left the driver’s side open and rush back to shut it. The stockier cop leaned into the Infiniti’s window.

“Can we call anyone to meet you at the hospital?” he asked. “Maybe Mom and Dad?”

“You’re never too old to call Mom and Dad,” the cop replied. He tried to make it sound jokey, as if it were cute, somehow, that she was trying to be independent.

Her phone was filled with numbers she should’ve deleted: girls who were never going to text her back and an international array of takeout places. The Indian woman always said her phone number as if it was her name.

At 11 p.m. on a weeknight, her mother’s voice would be a tiny rabbit caught in a snare. She’d yell out “Jack.” Wordless mumbling would crowd the line like a storm cloud thickening in the sky. A decision would be rendered: they’d ask where they could find her, or they’d tell her she was on her own. If her father got on, she might as well hang up. He’d only remind her that she’d wanted it this way. An insurance card and forwarding her mail—that’s all she’d asked for when she’d walked out.

The first thing her father would ask, if he talked to the cop, would be whether it was her fault. She couldn’t have that—not when it really wasn’t her fault.

Him and Her: that’s how she’d always stored them. Never as Mom and Dad, and certainly never as Home.

In the hospital, her whole arm quaked as she tried to keep her broken wrist upright. The woman behind the ER desk told her to elevate it above her heart. When Angelina asked her if she was a nurse—she wore scrubs and scowled authoritatively down at a clipboard—she snapped no, she was the intake clerk, “but you can’t work here without learning a thing or two.” A break, at least, got Angelina into a private exam room: She didn’t have to clench in the pain, or hold a taut focus on keeping her hand above her heart as children coughed around her or the man with an ice pack at his temple moaned a series of low, indecipherable curses.

When she was a kid, The Scream was her favorite painting; she was drawn to its wildness, the way it made her own inner ache feel profound.

The room was small enough that she could decipher each of the various faces on the tatty pain scale poster tacked up opposite the exam table. Old-school smiley faces—or at least one and two were old-school smiley faces. Three, four, and five were in escalating calibrations of annoyance, smiles dropped, eyes narrowing. Six, seven, and eight veered right into agony, with squiggles of mouths and x’s for eyes. Nine and ten reminded her, in their own loopy way, of Munch’s The Scream, with their circle mouths howling a silent agony. When she was a kid, The Scream was her favorite painting; she supposed she could say that was before she really knew anything about art, or that she was just another suburban punkling who saw the postcard at a Greetings and Readings and thought liking it above the Monet or Degas made her smarter. But really, she was drawn to its wildness, the way it made her own inner ache feel profound.

Angelina’s pulse quickened. Her father was in the hallway, yelling for her. With each boom of her heart, Angelina exhaled. This is not my fault.

He opened the door so hard the room shook. Her father had the bow-legged lumber of a bear. When she was a little girl, he’d endeavored to teach her a few words of Italian. She’d sit on his lap and study the shapes his mouth made: il pad-ri-no, mad-re, gra-zie, cu-or-e. She wanted him to teach her all her favorite animals: le-on-e, lu-po, and or-so. The bear: the wild black whorls of his chest hair, the wiry black hair on his head, the scratchy black of his mustache and goatee. She’d playfully slap her palm against his chest and yell, or-so, or-so, or-so until he’d start snuffling and growling. He’d toss his head back and roar, and the sound rolled clear through his body into hers like a wave that caught her from below, pushing her up so high, so fast that her head rang and her stomach flipped with a delicious dizziness that made her feel terrifyingly small yet also infinite. She’d lean forward to nip and growl at his face; he’d tease her by lolling his neck side to side, always just out of reach. Then, finally, he’d give in. He’d level his face with hers and let her roar.

He hadn’t changed much since then, at least physically: a high forehead and a blunt jaw, deep-set cinder eyes and a lean blade of a mouth. Grey hair threaded through his mustache, bristled at his temples. His wrinkles and sun-leathered patches of skin didn’t make him look older, only sharper, like some totem carved from unyielding stone.

They caught each other eye to eye. His gaze said, Goddamn, girl, I bet that hurts. Hers said, Don’t make this harder than it has to be. Please. 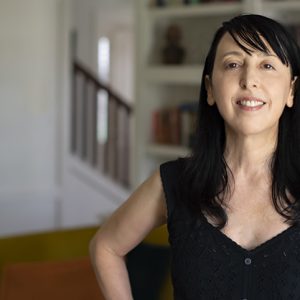