As Sinclair Lewis Foretold, It Can Always Happen Here

When Sinclair Lewis began to write his novel It Can’t Happen Here in May 1935, he was responding to specific events. The United States was in the middle of the Great Depression, and on the radio, Father Charles Coughlin, among the earliest American political demagogues to understand the value and the uses of mass media, was broadcasting a steady stream of homespun fascist rhetoric (arguing for nationalization of transportation and industry, attacking Jewish financial interests) to millions of listeners each week. In Louisiana, senator (and former governor) Huey Long was gearing up for a run at the presidency, hawking his own form of reactionary populism, centered around a program known as Share Our Wealth, which promised $5,000 to each American family. By the time It Can’t Happen Here was published in October, Long was dead, assassinated a month before at the Louisiana State Capitol. Still, the divisions he and Coughlin represented remained in play.

We often imagine, in hindsight, that history is inevitable, as if it could not have unfolded any other way. But the 1930s, not unlike the current moment, was a period of upheaval, both politically and socially. Europe was in turmoil and the economy was struggling, even after years of reforms. President Franklin Roosevelt was derided by his enemies as a radical and a traitor to his class. The Dust Bowl wreaked environmental devastation, leading to a mass migration out of the Great Plains; so virulent was anti-migrant sentiment that the Los Angeles Police Department launched the so-called “Bum Brigade,” sending officers to California’s borders to repel, by force if necessary, indigent refugees. I want to be careful not to make too much of these parallels—we do not, after all, live in the 1930s—and yet I also think we shouldn’t undersell the past.

For this reason, It Can’t Happen Here presents a strange sort of dystopian mirror (as Malcolm Harris suggested in Salon last September), reflecting, across the distance of 80 years, both the fissures of its epoch and of ours. The saga of a willful know-nothing, Senator Berzelius (Buzz) Windrip, who sells his ignorance as political capital, it is part satire, part cautionary narrative, a projection of a future that felt—it must have—much too close at hand. Backed by the Coughlin-esque Bishop Prang and offering, like Long, a $5,000 handout to every citizen, Windrip wins the Democratic nomination for president, then easily defeats his Republican counterpart, Senator Walt Trowbridge, as well as Roosevelt, who runs as an independent. No sooner is he the nominee than he issues “The Fifteen Points of Victory for the Forgotten Men,” with proposals including the regulation of unions “against the menace of destructive and un-American Radicalism”; restrictions against atheists, agnostics, Jews, African-Americans, and women; and amendments certifying that “Congress will serve only in an advisory capacity” and “the Supreme Court shall immediately have removed form its jurisdiction the power to negate, by ruling them to be unconstitutional or by any other judicial action, any or all acts of the President.”

Outrageous, right? Maybe not so much anymore, in a political climate where the Republican frontrunner openly endorses a wall along the Mexican border and a national registry of Muslims while calling a journalist a bimbo and retweeting revealing photos of her on his Twitter feed. It’s enough to make you doubt the credibility of progress, to imagine that we as a nation—as a species—are moving backwards rather than ahead. This is where It Can’t Happen Here becomes most resonant, reminding us that the push-and-pull between progressivism and nativism is, as Jon Meacham noted recently on Real Time, “the oldest American argument,” going back to the Constitutional Convention and the Alien and Sedition Acts. Here’s how Lewis frames it: “What this country needs is Discipline! Peace is a great dream, but maybe sometimes it’s only a pipe dream! … I’m not sure but that we need to be in a real war again, in order to learn Discipline! We don’t want all this high-brow intellectuality, all this book-learning. … No, what we all of us must have, if this great land is going to go on maintaining its high position among the Congress of Nations, is Discipline—Will Power—Character!” The speaker is a member of the D.A.R. who has sought to ban from the movies anyone who had “(a) ever been divorced; (b) been born in any foreign country—except Great Britain … or (c) declined to take an oath to revere the Flag, the Constitution, the Bible, and all other peculiarly American institutions.”

Such hyperbole is of a piece with Lewis novels such as Babbitt or Elmer Gantry, which satirized not only American hypocrisy but also American idiocy. In that sense, Windrip is one in a long line of the author’s protagonists: self-promoters and snake oil salesmen marketing their own ambitions as emblematic of the common good. If he’s not quite at the level of his antecedents—It Can’t Happen Here is minor Lewis, written quickly, five months from inception to publication, and responsive more to particular circumstance than to a general sense of America as self-aggrandizing booster culture—it gets at something less ironic, more sinister, that quality of nativism once again.

This is where Donald Trump and Ted Cruz come in, with their sense of nativism as morality. In the closing days of the Iowa campaign, both of them, as well as Marco Rubio and Ben Carson, courted evangelical voters: “Christianity is under tremendous siege,” Trump declared in Sioux City, promising to bring back “Merry Christmas” as a greeting for the holidays. As to how he might achieve this, it doesn’t matter; the promise is the thing. “[T]he greatest moral threat we’re facing is the assault coming from Washington, the media, and Hollywood,” Cruz claimed in November, a month or so before he zeroed in on “New York values” as a defining, and divisive, thread. Moral threat? Whose moral threat? Don’t look too closely or you may not like what you find. “We can go back to the Dark Ages!” a character declares in It Can’t Happen Here. “The crust of learning and good manners and tolerance is so thin!” That is the key to Windrip: he’s plain-spoken, a common man for common men, presenting his prejudice as common sense, what the people know and want to hear.

The same, of course, is what Trump and Cruz aspire to—to speak (or pretend to speak) the language of the proletariat while denying that proletariat what it needs. Health care, religious freedom (real religious freedom, that is, including the freedom not to believe), education: As with Windrip’s $5,000, their positions are chimeras, upside down statements made to consolidate power. As with Windrip also, they appear to be effective, galvanizing an undercurrent of intolerance and class resentment that is as American as apple pie. At the same time, I want to be cautious about this comparison; similarities aside, there are key differences as well. Like Long, Windrip seeks to redistribute wealth, to nationalize parts of the economy, which is anathema today. Like Coughlin, he is overtly anti-Semitic, whereas even Cruz can’t do much more than offer barbed bits of code. The dictatorship he installs is not particularly developed; that is the central weakness of the book. For all the bitter humor of the campaign, and Lewis’ pointed posture toward it, the novel unravels when he must imagine what comes next. Why?

I think of Philip Roth’s The Plot Against America, published in 2004, in the midst of another election season when so much seemed at stake. Roth claimed the timing was coincidental, that his novel, in which fascism comes to the United States after Charles Lindbergh defeats Roosevelt in 1940, was not commentary, although we can be forgiven if we don’t quite believe him: In 1971, he published Our Gang, in which a president named Trick E. Dixon contrives a war with Denmark as part of his campaign to give the unborn the vote. Still, Roth is right that literature functions according to its own imperatives—and also that if fascism were to come to America, it would be nativist in a different way. This is a nation, he writes in The Plot Against America, where “guarantees embedded in the U.S. Constitution, combined with long-standing American democratic traditions, made it impossible for a final solution to the Jewish problem to be executed … as rapidly or efficiently as on a continent where there was a thousand-year history of anti-Semitism deeply rooted in the common people and where Nazi rule was absolute.” The fascism he portrays, in other words, is more nuanced than Lewis’s, more (there’s no other word for it) democratic, or at least dressed in the trappings of democracy.

Here we see why real life can be more terrifying than fiction, because it unfolds in increments. Inevitability again, or (more accurately) its opposite. Just consider this election cycle: a year or more in, and until today no one had cast a vote. We are only at the beginning, and already we are overexposed. That is what Lewis couldn’t know—how could he?—writing in the era of Nathanael West and John Dos Passos, when mass media was in its infancy. And yet, somehow he understood it anyway. Windrip makes more than 500 speeches during his run for the presidency, talking until his throat is raw. He is everywhere, and nowhere, hiding his intentions, couching repression in the language of liberty. Sound familiar? It is the same rhetoric we keep hearing, Roth’s tyranny of American values brought to life. The danger, as Lewis recognized, isn’t that its purveyors are not like us. The danger, more fundamentally, is that they are. 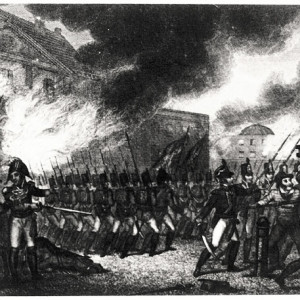 I can live in letters: on the collected letters and many lovers of Iris Murdoch. | The New York Times Sunday Book...
© LitHub
Back to top