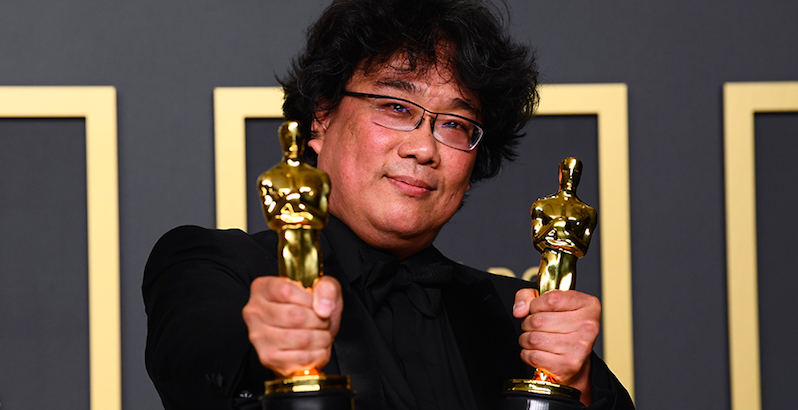 Olivia Rutigliano on Parasite, Auteurship, and Who Gets to Be Called a Director in Hollywood

The ceremony, at first fairly predictable, turned into a joyous surprise party with each of Bong’s victories, partially because non-English-speaking films have only recently begun to garner accolades from an institution that traditionally rewards Hollywood’s gilded mainstream (or movies about how movies are great), but also because these wins reveal an Academy taking a small step towards a wider, more progressive view of cinema. After all, last year’s actual best picture, Alfonso Cuarón’s Roma, took home a bunch of awards (Directing, Cinematography, Foreign Film) without actually being awarded Best Picture, a title which went to the mawkish and self-congratulatory Green Book.

Parasite’s dynamite sweep is the first step toward the remaking of what a Best Picture might actually look like to the Academy (and therefore, to the Western world)—nonwhite, non-English-speaking, non-American, non-Western, and (for extra fun) anti-capitalist. It also reveals (possibly) that the Academy is growing less and less resistant towards defining various categories of excellence and genius in more diverse ways.

Parasite’s dynamite sweep is the first step toward the remaking of what a Best Picture might actually look like to the Academy (and therefore, to the Western world).

But the cynic in me is anxious that Parasite’s win could be more about the Academy’s happiness to engage in auteur-making, rather than any indication of a broadening of its cinematic worldview. An “auteur,” as historicized by film scholar Peter Wollen in 1969, is a distinct “author” of films—an artist of some kind who leaves a distinct stamp of his genius across his works, either through dramatic motifs or aesthetics. The Academy loves to help shape artists into creative institutions, and might it simply be the case that Parasite, the latest feather in Bong’s cap, is incredible enough for Oscar voters to want to help build a Western-accessible South Korean directorial celebrity, someone whose films will one day offer clips to an Academy montage about the greatest moments of cinema? I hope not. Is Bong Joon-ho the exception that proves the rule of persistent Western cinematic aesthetic dominion? I hope not. Only time will tell.

As I’ve said, Parasite is the first indicator of what a new, more reflective “Best Picture” might look like. But it’s also worth asking what is to become of the category with which it is most often entwined: Best Director.

Interestingly, the 2010s saw an incredibly diverse slate of Best Director wins, with five of the awards going to Mexican directors—Alfonso Cuarón in 2013 and 2018, Alejandro G. Iñárritu in 2014 and 2015, and Guillermo del Toro in 2017—and one going to Taiwanese filmmaker Ang Lee in 2012, who became the first nonwhite director to win for Brokeback Mountain in 2005. Way back then, Lee’s Brokeback Best Director win was its own kind of consolation price, paired with the same film’s dismissal for Best Picture, in a (then-) rare moment when the Picture/Director awards were split, reflecting achievement without rocking the boat. Conversely, in the 2010s, the Picture/Director awards were split half of the time (Green Book/Roma, Moonlight/La La Land, Spotlight/The Revenant, 12 Years a Slave/Gravity, Argo/Life of Pi).

It’s true that none of these directors, except Cuarón with Roma, made films about international experiences (all the others are actually about America in some way, shape, or form). So, is the Academy fully ready to embrace cinematic representations of others’ experiences, of social difference? The only other non-white-male to win in a major category last night was Taika Waititi, a New Zealand filmmaker of Maori heritage who made Jojo Rabbit, a film about World War II (and specifically, about a relationship between a hidden Jew and a Nazi). What is more familiar to the Academy than that kind of premise?

This moment in Oscar history offers an opportunity to truly refashion what an “auteur” looks like, something the Academy badly needs to do when it comes to black and female artists. This is not to “America first” the fabulous and groundbreaking and much-needed international nature of Parasite’s win, but to say that if the Oscars are interested in remaking who is allowed a statue in its halls of heroes, there are a few other ways they might get started.

This moment in Oscar history offers an opportunity to truly refashion what an “auteur” looks like, something the Academy badly needs to do when it comes to black and female artists.

Though they’re supposed to be prizes for superior cinematic achievement, more often than not the Oscars amount to acknowledgements of lifetime achievement or excellent press tours, or consolation prizes that reflect the biases of the film industry’s more conservative tastes. This seems obvious when looking at the many directors who have recently made groundbreaking films, receiving nominations in both Direction and Screenplay categories, but who only seem to win writing awards. I think of Jordan Peele for Get Out in 2017 and Spike Lee for BlacKkKlansman in 2018, but especially Barry Jenkins in 2013 for Moonlight, a film which also took home the award for Best Picture of the year.

There seems to be a pattern, at least with these three films, in which the Academy formally acknowledges black male directors alternatively as “writers.” I think again of Precious at the 2009 ceremony—its screenwriter Geoffrey S. Fletcher won an Oscar for it, but its director Lee Daniels was only nominated. Rather like Moonlight, 12 Years a Slave won Best Picture (2013), but its director, Steven R. McQueen, was also only nominated, although its writer John Ridley won Best Adapted Screenplay. Before this era, nominations for directors of color were also not as common—Alfonso Cuarón himself was nominated only for screenplays for films he both wrote and directed: Y Tu Mama Tambien (2003) and Children of Men (2007), though Iñárritu was nominated for directing Babel in 2006.

The Academy’s limited inclusion of filmmakers, performers, and other professionals of color has been long criticized (most famously by the #OscarsSoWhite hashtag in 2015) and especially in this year, in which there was only one person of color nominated in any performing category (and there are, it is worth saying, twenty slots, and there have been many deserving and stupendous performances by people of color, this past year). The Academy has made a push, because of this press, to be more inclusive and progressive. But it remains the case that a black director has never won an Oscar for feature direction (only four have been nominated, ever). This is a different argument, but it’s not entirely unrelated; only five women have been nominated in the category, with only one victor—Kathryn Bigelow in 2009 for The Hurt Locker.

Last night, Greta Gerwig did not win the Best Adapted Screenplay Oscar for her film Little Women, which she also directed. Gerwig was not nominated for Best Director despite the fact that her film was one of the eight nominated for Best Picture—a detail which caused an uproar when the Academy nominations were revealed on January 13th, particularly because no women were nominated in that category, despite this being a record year for female-directed projects. Lulu Wang’s The Farewell, Mati Diop’s Atlantics, Marielle Heller’s A Beautiful Day in the Neighborhood, Lorene Scafaria’s Hustlers, Melina Matsoukas’s Queen & Slim, Olivia Wilde’s Booksmart, and Joanna Hogg’s The Souvenir, to name a few of the most critically acclaimed, garnered nominations for major awards from the Golden Globes to the Palm d’Or.

Before making any broad claims about what this means, it’s important to know how Academy voting works—industry members in each profession are allowed to vote only in the categories relevant to them, which (ostensibly) prevents people who are ignorant of the technologies or practices behind certain features from having any say about them. So, it’s not as if a board of directors, somewhere, has, of late, chosen to distribute the writing and directing awards to different artists, and therefore reflect a deliberate hierarchy about their participation in various positions.

As of late, writing awards seem to have become designated head-nods to talented polymathic maestros whose films might seem a little too controversial or specific for the top prize.

But it is noticeable that so few of the films that have won awards for directorship are about subjective experiences or representation of social difference. Writing award winners Get Out, Moonlight, 12 Years a Slave, BlacKkKlansman, and Precious, as well as Lady Bird and Little Women (films which were directed by Greta Gerwig while she was also called a writer) are about personal experiences—what it is like and what it means to be a black person, or a young woman in various historical contexts. Birdman, The Revenant, and (honestly) Brokeback Mountain are films about white men. Gravity is a film about a woman who has nothing to live for because she is no longer a mother. The Shape of Water is about a disabled (mute) woman who finds love she deserves from a fish-monster. The Hurt Locker is a film about the Iraq war and features a single woman, in flashbacks. While these films represent certain kinds of technical and aesthetic mastery, they are not introspective or necessarily productive or even wholly thoughtful films. Are these the films chosen to show what diverse directorship can do?

Parasite, and Roma, last year, seem to have begun to establish how filmmakers of different backgrounds might be allowed to win praise for making films that tell stories other than those of white men. Countless acceptance speeches at the Oscars will exhort the imperatives of “storytelling” but the Oscars itself has always offered a prioritization of stories it celebrates as emblematic. As of late, writing awards seem to have become designated head-nods to talented polymathic maestros whose films might seem a little too controversial or specific for the top prize. Calling directors of color and women directors “writers” is another way of saying the stories they are telling about subjective experiences cannot be fully universalized. Directing is a public pursuit, but writing is private or personal, even solitary. Stories by filmmakers of color and women are kept as “stories,” if they win for writing and not directing, not recognized as mass experiences but individual concerns.

While the Academy evidently no longer conceives of “directorial genius” as the strict territory of white men, it has a long way to go in recognizing and reflecting the broad and vital diversity of contemporary filmmaking. Countless Oscar montages through the years have insisted that movies can bring us the world. The least the Academy can do (and by now, it’s truly the least) is realize that this works the other way around, too.

It's just a really good day on the queer book internet! 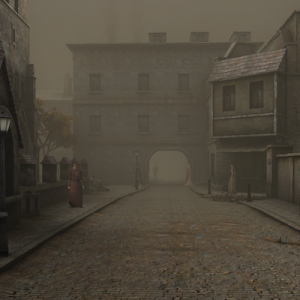 When tourism meets true crime, the results are bound to make you queasy, and the Whitechapel district of London, with its ghoulish...
© LitHub
Back to top