Via University of Arkansas Press

A Poem by Jessica Abughattas

At the Chicago home of two of the film’s well-to-do backers, Irish Catholics.
There was talk of the baby their daughter had adopted from Uzbekistan.
The trauma of not being held.
There are not enough women in the orphanages
to hold all the babies, so they put them in one crib.
The night outside was black
and I felt the chill inside my womb.
There was a closet to hang our coats.
The director, absent from the table,
is tense when his wife is on set.
The hostess took our coats.
They had a white dog four feet tall
with a coat you could find on a Bergdorf floor.
The Bulgarian washed vegetables barefoot.
When we embraced, she smelled my perfume.
“Look how beautiful your woman is!”
A remark about my collarbones.
There was talk about filmmaking in Occupied Palestine.
The trained fighters hired for security
ran off leaving the actors in combat.
They had to push the car through the desert.
The meal was decadent and the hostess pleasant.
There were collard greens, corn, a roast.
The hostess said they wanted an American feast.
And Jack with his white beard and iridescent teeth at the head of the table.
The Palestinian went out into the frost to smoke,
stepped in the tundra dog’s shit.
There was talk about the gentrification of Eastside Los Angeles,
the finest sushi in Little Tokyo.
The cinematographer requested roasted vegetables.
A rhubarb pie was served.
There was a large bowl of tropical fruit.
The wooded suburbs of Chicago
are so dark you could die
if a deer runs in front of your car.
The house was recently remodeled.
The Bulgarian actress pretty without makeup.
The director was off on a marital dilemma.
All the actors had spouses.
Instructions how to kiss, blocking
can make anyone fall in love.
There was talk about the promise
of the young director who sat beside me.
There were three Palestinians, two Irish, the Bulgarian.
The cinematographer was Chinese American.
The AD was white and gay.
The house was so big I got lost in the powder room.
It had been a tough night on set.
The scene called for nudity.
An intimacy coach was brought on set.
The director is having marital problems.
There aren’t enough women to hold the babies.
A letter arrived and I saw him smell it.
We smoke in frost and step in shit.
The Akita is angelic.
There was talk about the rental market.
A stucco Mediterranean
true to the Golden Age of 1920s Hollywood.
He’s a promising young man
who directs me.
I am a decent woman.
I have scandalized a few.
Everyone fell silent.
The rhubarb pie was served too hot.
The hostess was pleasant.
There was a coatroom and a remark
about my collarbones.
A decadent American feast.
The Palestinian fought off three men,
or so he says.
Being held is a trauma.
One crib held all the babies in Uzbekistan.
When we embraced, she smelled tropical.
Nudity was called for.
The Palestinian was humiliated.
A car could kill you in the dark.
Not while your wife is on set.
Washed face and barefoot.
It had been a tough night.
We held hands the whole way up the cobbled path. 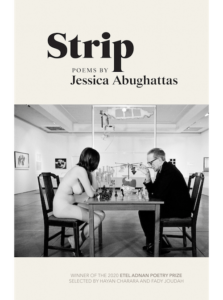 “Dinner Party” from Strip: Poems by Jessica Abughattas, winner of the 2020 Etel Adnan Poetry Prize. Used with permission of the University of Arkansas Press.

Jessica Abughattas, who received an MFA from Antioch University, is a Kundiman Fellow. Her work has been published in Lit Hub, Redivider, BOAAT, Muzzle, The Journal, and Tinderbox, among other publications. She lives in Los Angeles.
Share: 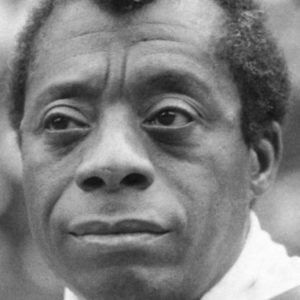