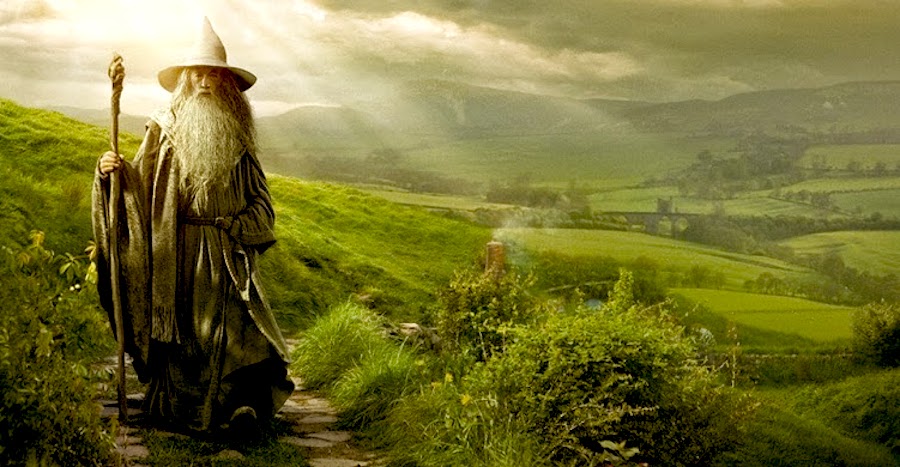 Umberto Eco has examined our ongoing fascination with the Middle Ages and listed ten different versions including the “shaggy medievalism” of works like Beowulf. Much of J.R.R. Tolkien’s success as a ﬁction writer derives from assimilating several of these fantasies of the past including the decadent Middle Ages described by Faramir at Minas Tirith. Strangely missing from Eco’s literary types was the jolly, earthy, boisterous Middle Ages of the Decameron in his Italian tradition and the Canterbury Tales in ours. This Chaucerian legacy, so clearly embodied in Tolkien’s hobbits, is easy enough to miss because it has been so thoroughly normalized in English literature that it no longer seems “medieval” at all, especially in Oxford where Chaucer had been a steady literary presence for more than ﬁve centuries.

Some listeners inside Merton Hall in 1959 might nonetheless have been surprised that Tolkien, best known for his work on Old English poetry, devoted a section of his “Valedictory Address” to recruiting Chaucer to the cause of Language against Literature in a debate still very much alive in the retiring professor’s mind:

His merits as a major poet are too obvious to be obscured; though it was in fact Language, or Philology, that demonstrated, as only Language could, two things of ﬁrst-rate literary importance: that he was not a fumbling beginner, but a master of metrical technique; and that he was an inheritor, a middle point, and not a ‘father’. Not to mention the labours of Language in rescuing much of his vocabulary and idiom from ignorance or misunderstanding.

Repeating views about Chaucer from his letter to John Maseﬁeld in 1938, this encomium would have sounded surprising only because nobody knew about Tolkien’s efforts at rescuing 14th-century vocabulary and idiom during his own long labors on Selections from Chaucer’s Poetry and Prose.

Like almost all medievalists in the 20th century, Tolkien as a youngster had come to the ﬁeld by way of Chaucer and took some delight in noting that his son John, at the age of 2, had already added “Chaucer” to his vocabulary. His teacher George Brewerton, himself a medievalist, sparked Tolkien’s earliest interest by reciting the Canterbury Tales to their class at King Edward’s School. Unlike other medievalists like C.S. Lewis, however, Tolkien insisted that English literature ended rather than began with Chaucer (Biography, 77). With the 14th-century poet seldom far from his thoughts as the culmination of all that came before, even his famous Beowulf lecture opened with a witty allusion to the General Prologue (574–5): “it may seem presumption that I should try with swich a lewed mannes wit to pace the wisdom of an heep of lerned men” (Essays, 5–6). His 1947 purchase of the Ellesmere facsimile testiﬁed to his ongoing concern with Chaucer, and in 1951 when invited by his former student R.T.O. d’Ardenne to deliver a paper at a conference in Liège, he decided to investigate the word losenger which had engaged his attention when glossing the Legend of Good Women almost three decades earlier for his Clarendon Chaucer.

For so many years, Tolkien had been loaﬁng in his scholarly career as a losel who squandered time on children’s stories when he should have been whipping his Beowulf book into shape.

It is worth digressing to ponder why, from among all the words in Old and Middle English, Tolkien chose this word losenger as the subject for what would become one of the last scholarly studies published during his lifetime. He had provided no entry for the word in his Chaucer Notes and may have felt that the omission represented unﬁnished business. But with so many other loose ends in this edition, there must have been something else weighing on his mind. Here he deﬁned the word in its original Chaucerian context as “slanderer,” “liar,” and “backbiter” related to the word losel for “idle wastrel.” Perhaps it would not be far-fetched to suggest that at this point in his career, after more than a quarter-century as an Oxford professor, Tolkien looked back guiltily upon all the unkept promises to publishers and all the accusations of idleness from colleagues, and he produced this paper as a sort of mea culpa. His research student V.A. Kolve recalled him reﬂecting upon these shortcomings: “He confessed to me once that some were disappointed by how little he had done in the academic way, but that he had chosen instead to explore his own vision of things.”

Already by 1932 he admitted to Chapman the weight of the Chaucerian incubus upon his conscience. His Gawain edition, “Chaucer as a Philologist,” and “The Monsters and the Critics” had all appeared before the Second World War. Set against this relatively slender résumé were undelivered assignments such as his Pearl edition, the book-length “Beowulf” and the Critics, and his EETS edition of Ancrene Wisse. If his own harsh remarks about George Gordon holding up their Chaucer edition did not quite qualify him as a “slanderer,” these complaints did deﬂect blame from his role as an “idler” who failed to reduce his annotations to a publishable length. He would confess during a newspaper interview in 1968, “I have always been incapable of doing the job at hand.”

For so many years, in short, he had been loaﬁng in his scholarly career as a losel who squandered time on children’s stories when he should have been whipping his Beowulf book into shape. He conﬁded to his publisher in 1937 that Oxford would merely add The Hobbit to his “long list of never-never procrastinations” (Letters, 18). Fiction-writing simply did not count in terms of academic production, especially after Tolkien had idled away his two-year Leverhulme Research Fellowship. “The authorities of the university,” he would lament when The Lord of the Rings was in press, “might well consider it an aberration of an elderly professor of philology to write and publish fairy stories and romances” (Letters, 219). He explained to his American publisher this widespread view of his failings: “Most of my philological colleagues are shocked (cert. behind my back, sometimes to my face) at the fall of a philological into ‘Trivial literature’; and anyway the cry is: ‘now we know how you have been wasting your time for 20 years'” (Letters, 238). His enormous effort during the late 1940s in the cramped row-house without even a desk—”I typed out The Hobbit—and the whole of The Lord of the Rings twice (and several sections many times) on my bed in an attic of Manor Road” (Letters, 344)—was little known because it simply did not count.

Then in May 1951 when struggling to deliver The Lord of the Rings to his publisher, OUP’s Dan Davin forced him to surrender all his Clarendon Chaucer materials. So it does not seem entirely accidental that in July of this same year, when he was asked to deliver a paper at Liège in the autumn, his thoughts turned automatically to Chaucer—and he decided upon tracing the etymology of losenger as “liar” with a degree of unspoken self-reproach as a scholar who promised so much and delivered so little. To return to his remarks on Chaucer in his “Valedictory Address,” Tolkien was correct when reminding his audience that the 14th-century poet was as much an inheritor as an inventor. Thus he was also the ﬁrst English writer to feel his own “anxiety of inﬂuence” generated by all the Classical and Continental predecessors ceaselessly named throughout his works, as well as the native English writers such as Langland and the Gawain Poet never even acknowledged. These would have included the Alliterative poets to whom Chaucer was indebted in his Cleopatra and Knight’s Tale, as Tolkien had documented in his draft commentary.

If readers have not previously detected Troilus and the Canterbury Tales in Tolkien’s Middle-earth, it is because nobody was alert for noticing these ingredients.

Nietzsche had described the ﬂashpoint for a certain kind of creativity:

Great men, like periods of greatness, are explosives storing up immense energy; historically and physiologically speaking, their precondition is always that they be collected, accumulated, saved, and preserved for over a long period—that there be a long period without explosions. Once the tension in the mass becomes too great, then the most accidental stimulus is enough to bring “genius,” “action,” a great destiny into the world.

This nicely describes Chaucer’s long apprenticeship and late start as a poet, his ﬁrst major poem, The Book of the Duchess, written when he was around 30. It also describes Tolkien’s lengthy period of reading, researching, and drafting unpublished writings before the spark for an ignition came when Stanley Unwin requested a second hobbit book—and his great destiny as a writer of genius took shape. Already loaded with Old English, Old Norse, and Middle English texts as well as great authors such as Spenser, Shakespeare, and Milton, the jampackedness of Tolkien’s literary imagination included Chaucer abundantly in his storehouse of explosives. Isn’t it altogether ﬁtting, then, that The Lord of the Rings should begin with Gandalf’s ﬁreworks?

The Clarendon Chaucer may have found him in 1922, not the other way around, but once he accepted the commission, he came to recognize a writer with unexpected resemblances to himself in storytelling and craftsmanship, even in his biographical proﬁle. As a Saxonist, he acknowledged the similarity between the scene of Bilbo stealing a gold goblet from Smaug’s hoard and the episode of the nameless burglar stealing a goblet from the dragon’s hoard in Beowulf (Letters, 31), but as with so many writers in the English tradition, his narrative artistry was steadily and inescapably Chaucerian. Sometimes Tolkien himself discovered these resemblances only after the fact, as when lecturing on the Pardoner’s Tale in the 1950s, while other parallels emerge only now that we know about his career-long engagements with Chaucer. If readers have not previously detected Troilus and the Canterbury Tales in Tolkien’s Middle-earth, it is because nobody was alert for noticing these ingredients. 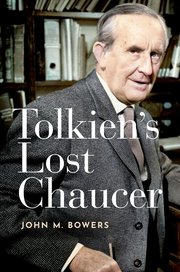 From Tolkien’s Lost Chaucer by John Bowers. Copyright © 2019 by John Bowers and published by Oxford University Press. All rights reserved.

John M. Bowers is a specialist in medieval English literature with books on Chaucer, Langland, and the Gawain Poet. His articles span the range from St. Augustine to Shakespeare. Educated at Duke, Virginia, and Oxford where he was a Rhodes Scholar, he taught at Caltech and Princeton before beginning his career at UNLV in 1987. His work has been supported by fellowships from the NEH, Huntington Library, and the John Simon Guggenheim Foundation. His Great Courses series The Western Literary Canon in Context was released in 2008. He published his 9/11 novel End of Story and has completed his Iraq War novel Legion of the Daggerstone. His latest book, Tolkien’s Lost Chaucer, based on his discovery of an unpublished, unknown book by J. R. R. Tolkien, has been published by Oxford University Press. 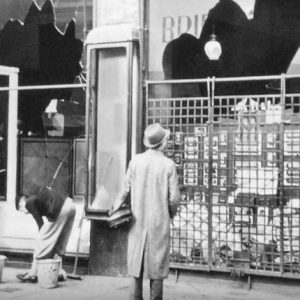 The copy of Françoise Frenkel's No Place to Lay One’s Head that was recently found, I’m told, in Nice, in an Emmaus...
© LitHub
Back to top
Loading Comments...