Did Amazon Throttle My Sales After I Criticized Them in the New York Times?

My mom was so proud: I was quoted in The New York Times. The article by David Streitfeld ran under the headline, “In Amazon’s Bookstore, No Second Chances for the Third Reich.” Streitfeld had noticed my How To Resist Amazon and Why zine and interviewed me for an anti-Amazon perspective. Bonus: he even mentioned the zine in the article.

In the online version of the article you can click on the title of my zine; the link takes you to the zine’s Amazon page. I’ve often spoken about how in-article links enable Amazon’s monopoly in online bookselling. [1] Still, just for fun, I clicked on the link to my zine’s Amazon page. I always enjoy the irony of seeing it up there. But this time I noticed something different: Amazon had stopped offering the zine for direct sale. Often on Amazon it can be hard to tell whether you’re buying from Amazon directly or whether you’re buying from a third-party seller. You’re know you’re buying direct if you see the phrase “Ships from and sold by Amazon.com.” That phrase was now erased from my zine’s page.

Before Streitfeld’s article was published, every time I happened upon the zine’s Amazon page there was always a direct buy button. Interestingly, the promised shipping speed was “usually one to two months.” The reason for this, according to an email from Microcosm Publishing CEO Joe Biel, is “based on supply chain logistics.” As an effort to prevent Amazon from dictating their terms of sale, Microcosm doesn’t sell direct to Amazon. If a Microcosm title is available as Buy Direct on Amazon, Amazon has pulled the book’s data from something like the Books In Print database to create the book’s page. Then, Amazon orders inventory from a place that Microcosm does sell to, like Ingram. Ingram was frequently backordered as How To Resist Amazon and Why became popular, so Amazon’s fulfillment speeds were slow. But now, somehow, buy direct isn’t even an option. There are only a few third-party sellers with names like “SuperBookDeals” offering mostly used copies of my zine for well above its $4.95 MSRP.[2] At some point, Amazon decided to stop offering my zine directly.

On Twitter, Streitfeld himself tweeted, “Hard to believe Amazon would pull the plug on someone’s book just because I quoted him about Amazon, but also hard to come to any other conclusion here. I’ve reached out to Amazon for comment but so far silence.”  Biel wrote in an email, “it’s hard to interpret it as anything but punitive.”

I don’t know when exactly my zine’s buy direct button disappeared. I often checked the zine’s Amazon page,[3] but I didn’t check it every ten minutes and I don’t have a screenshot of the exact minute the buy direct button disappeared. Still, that’s kind of the point—neither I nor Microcosm have heard anything about Amazon’s decision.[4] According to Biel, “Amazon does not communicate whatsoever. As a publisher, you literally have to pay them to communicate with you.” Even The Raven, my tiny bookstore, has a list of policies for how we curate our shelves. We share that information with authors who want us to stock their work.

But Amazon’s decisions about what goes on their shelves are much, much more consequential than The Raven’s, and much harder to parse. Streitfeld’s article shows that Amazon’s transition from “we’ll sell anything!” to “we’re getting rid of inappropriate books” is vague and apparently capricious. It has disturbing free speech implications. With a company as big as Amazon, arguments like “private companies can sell and not sell what they want” don’t hold much weight. If Amazon is big enough to bend the trajectory of governments, it’s big enough to bend the trajectory of free speech. I know I’m paying close attention.

[1] The discussion of linking is why I think bookshop.org is so important: Bookshop is a new initiative aiming to capture a piece of the online linking market and share some of its profits with independent bookstores.

[2] How To Resist Amazon and Why is available from Microcosm Publishing at sticker price with much faster shipping than anything you’ll find on Amazon.

[3] Amazon’s sales ranking data is one way they hook authors—who wouldn’t want to know they were #859 in “Book Publishing Reference,” and who wouldn’t come back tomorrow to see if it had gone up?

[4] It’d be easy to guess the buy button disappeared because nobody was ordering the zine, but that’s not the case. It was one of Microcosm’s bestselling titles of 2019, and it’s widely stocked throughout the country. Even the most conservative estimate of the clicks generated by a New York Times link would show that the zine’s Amazon site had a spike in traffic yesterday.

Danny Caine is the author of the poetry collections Continental Breakfast (Mason Jar Press 2019) and El Dorado Freddy's (collaboration with Tara Wray, Belt Publishing 2020), as well as the chapbook Uncle Harold's Maxwell House Haggadah (Etchings Press 2017) and the zine How to Resist Amazon and Why (Microcosm Publishing, 2019). His poetry has appeared in DIAGRAM, Hobart, Barrelhouse, and Mid-American Review, among other places. The Midwest Independent Booksellers Association declared him the 2019 Midwest Bookseller of the Year. He lives in Lawrence, Kansas where he owns Raven Book Store.

In case you missed it, here's Margaret Atwood on an electric scooter.

Here's the cover for Elena Ferrante's next novel. 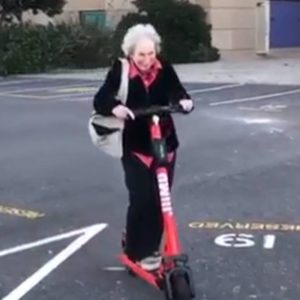 In case you missed it, here's Margaret Atwood on an electric scooter.

Beloved literary titan Margaret Atwood is currently in New Zealand to promote the release of The Testaments, her Booker Prize-winning...
© LitHub
Back to top