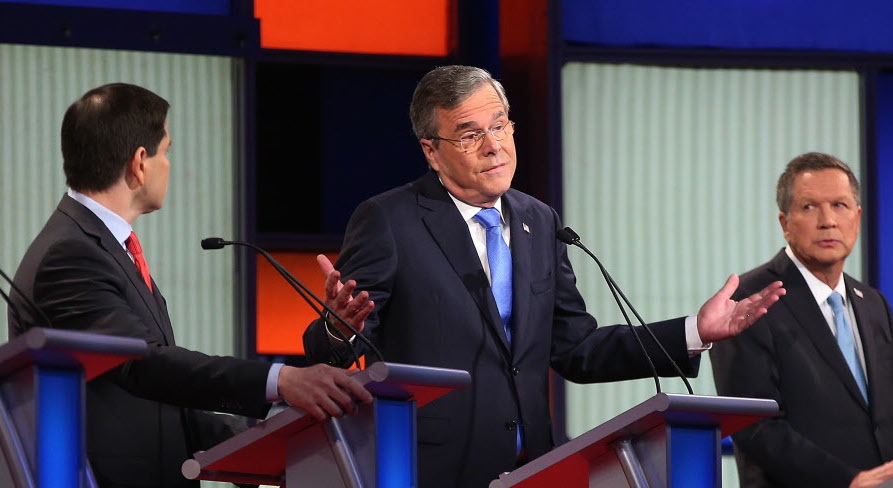 Translating the Spin from the Last Iowa Free-For-All

The January 28th Republican Primary Debate, in Des Moines—the GOP’s final official stand-off before today’s Iowa Caucuses—was notable for its creative use of deliberately deceptive language (or, as we prefer to call it, Spinglish.) Indeed, perhaps the most striking example of such verbiage occurred before the festivities even began, and it was uttered by a candidate who elected not even to attend. Here are the details:

“I refuse to call Megyn Kelly a bimbo, because that would not be politically correct.” This proclamation from Donald Trump, issued as part of his carefully staged refusal to participate in the debate, employs the classic Spinglish technique of promising you won’t say something as a prelude to actually saying it. It also makes use of Trump’s favorite Spinglish phrase, “politically correct,” which, throughout the campaign, has provided cover for his insulting, or offering policies discriminating against, women, disabled people, and religious and ethnic minorities.

“[We] need to stop allowing political correctness to dictate our policies, because it’s going to kill us if we don’t.” Trump may not have been present at the debate, but retired neurosurgeon Ben Carson was, and he upped the ante on the term “political correctness” by using it to suggest that government actions designed to guarantee equality and justice for all are actually inimical to the survival of our nation and its citizenry.

God-given potential. By framing the notion that all Americans deserve an opportunity to succeed in the context of everyone’s “God-given potential,” Governor John Kasich was attempting to make his suspiciously progressive-sounding ambition to help level the playing field for the less fortunate more appealing to Christian fundamentalists. In a previous Democratic debate, Hillary Clinton used similar language for exactly the same purpose.

“The threat from ISIS is unprecedented.” As Nicholas Kristof of The New York Times pointed out, this statement by Senator Marco Rubio seems a bit exaggerated when the challenges currently posed by Islamic terrorists are compared with, say, World War II or the burning of the White House by the British in 1812.

“the biggest job-killer in this country.” Senator Ted Cruz summoned up this memorable phrase in the course of contending that the Affordable Care Act “has been a disaster.” Cruz’s terminology qualifies as Spinglish because, in fact, employment has risen broadly and consistently since Obamacare was enacted. Specifically, the website Politifact.com points outs, “the unemployment rate has moved steadily from 9.9 percent to 5 percent. The economy has added about 10.7 million jobs. And the number of working people who have part-time work but would rather have full-time work has fallen by nearly 3 million.”

“the greatest show on earth.” Marco Rubio used this sobriquet to describe Donald Trump, whom, he conceded with faint praise, is “an entertaining guy.” On the surface, Rubio was merely arguing that Americans need to focus on the substantive issues confronting them, rather than being distracted by someone who is frequently accused of behaving more like a reality TV star than a serious candidate for the presidency. But, by invoking the motto of the Ringling Brothers Barnum & Bailey organization, the Florida senator also succeeded in associating the Republican front-runner with the nation’s most iconic circus (not to mention the clowns who figure prominently in its marketing efforts).

“[The] media… is manipulating and shaping and framing this campaign and has been for at least a year now in order to get the kind of choices that people are going to have an opportunity to see.” Bottom-of-the-undercard candidate Jim Gilmore, the former governor of Virginia, used this claim to explain why no one was paying any attention to him during the debate, and, by extension, to account for the fact that the populace seems utterly unaware of his campaign for the Republican nomination. “This is wrong, it has to change,” Gilmore asserted, adding, perhaps somewhat less than convincingly, “and when I’m president, it’s going to change.”

path to citizenship. Just as Governor Martin O’Malley went to great pains, during two of the Democratic debates, to emphasize that politicians use the phrase “boots on the ground” to divert attention from the fact that actual people are being sent into combat to kill and, possibly, be killed, Marco Rubio reminded us forcefully that the term “path to citizenship” is actually a code word for “amnesty.” Thanks, Senator Rubio, for doing our Spinglish-English translation work for us!

Reciting the preamble of the U.S. Constitution. When you’re asked to give a closing statement, and you have absolutely nothing concrete to say, rattling off a portion of one of your nation’s seminal documents might seem like a useful alternative. At least that’s what Ben Carson must have reasoned, attempting—and almost succeeding—to offer up a verbatim recitation of the opening paragraph of the Constitution. (His only mistake: substituting the word “benefits” for the original “blessings.”) Carson concluded his performance with a more than apt: “Enough said.”

“Thank you all so much for being here tonight.” Megyn Kelly’s farewell salutation to the debaters was framed perfectly to cast Donald Trump’s decision not to be there—a choice he had blamed in part on Kelly’s “lightweight” moderating skills and her insistence on asking “unfair” questions—in a negative light.

In closing, we feel compelled to note that Governor Chris Christie, after listening to Rubio’s and Cruz’s pained attempts to explain away video evidence that they had both flip-flopped on the immigration issue, blurted out, “This is why you need to send someone from outside of Washington to Washington… I feel like I need a Washington to English dictionary converter, right?” Modesty, and a carefully honed sense of propriety, forbid us from pointing out here that our recent book, Spinglish: The Definitive Dictionary of Deliberately Deceptive Language, is precisely the volume that Christie is begging for. If you insist on learning more about it, you’ll have to look elsewhere.

Interview with a Bookstore: The Mysterious Bookshop 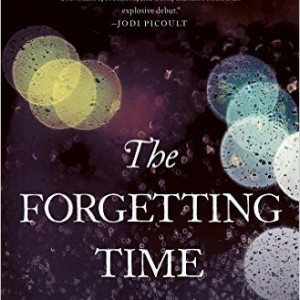 Early morning, and the day already warm. Anderson was eating breakfast with his old friend Angsley on the veranda of their...
© LitHub
Back to top