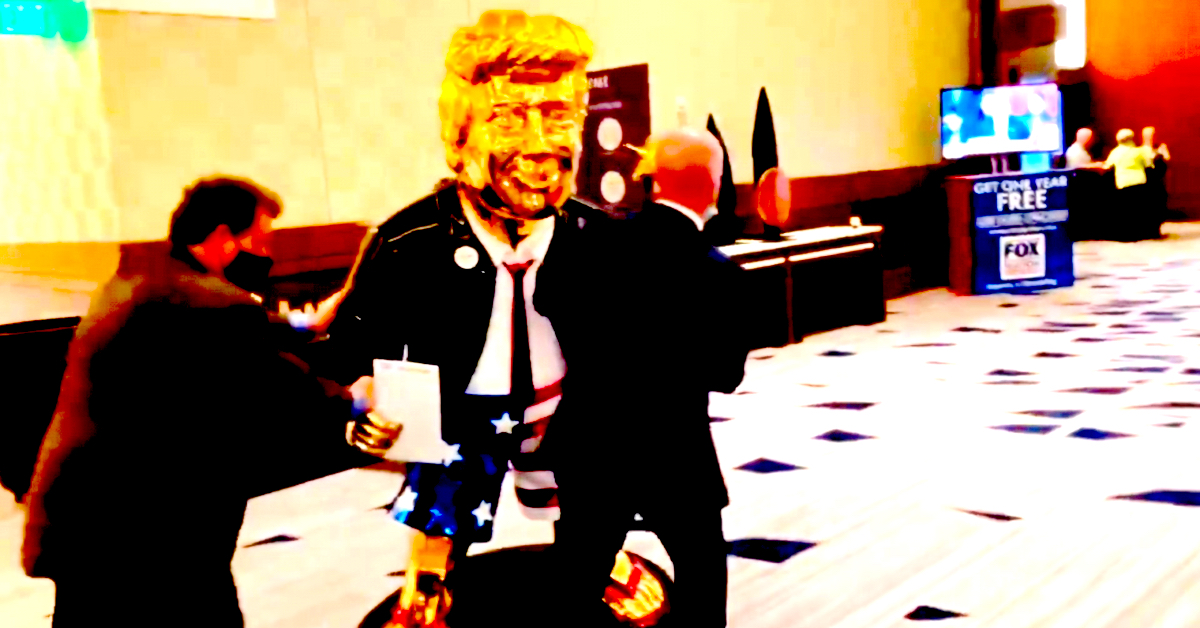 Timothy Denevi Wanders the Backwaters of the New Conservatism

It’s Friday morning, the kickoff to the 2021 Conservative Political Action Conference, and one thing is clear from the start: the Orlando resort hosting this year’s event is teeming.

Conference-goers crowd the Hyatt Regency’s air-conditioned hallways. In the lobby, recent arrivals wait impatiently with their bags. The line I’m moving through is progressing swiftly into the ballrooms and hallways where the conference is being held. (The venue was changed at the last minute from its usual locale, at the National Harbor, to take advantage of Florida’s lax pandemic protections.)

After a cursory temperature check, which earns a sticker allowing free-passage for the day, I find myself in a vast, high-ceilinged corridor, the center of which is made up of a long double-sided corral of media booths. Speakers have already taken the stage in the ballroom beyond. But the main action tends to unfold out here, in the corral, during the live broadcasts and interviews and publicity trolling that, only a few hours into the event, is already off to a raucous start.

Right as I’m walking in there’s a commotion. Every attendee has to wear a mask when they’re not eating or conducting interviews—I’ve layered an N95 beneath a looser cloth cover—but now, to my right, an older woman is refusing to put hers on. She’s arguing with a beefy-looking guard, who refuses to let her pass.

The wiry woman jumps back. What she does next surprises me. Without breaking eye-contact with the guard, she reaches out, and, from the hand of her nearby husband, she snatches a plastic cup, which is half full of water (her husband, masked and docile and standing at her side, only now seems to realize the scene she’s making).

She waves this cup at the security guard. “I’m drinking,” she says. “You can’t make me wear a mask when I have this in my hands.” She brings the cup to her lips and mimes a sip. And like this, with the disposable cup held performatively in place, she walks past all of us and into the crowd beyond. (A few minutes later, a CPAC official announces from the stage of the main ballroom: “Everyone, when you’re seated, you should be wearing a mask.” In response the crowd erupts in boos. “Freedom!” they shout. “No!”)

I wend my way down to the walkways surrounding the media booths. This year, the attendees appear to be boasting a variety of shirts and hats. Trump 2024. And: Trump Won. And: Cult 45, a logo in the style of the malt-liquor brand. There’s also the more familiar-looking CPAC veterans: men in dark blue suits and leather shoes; women in sleek, humorless dresses. And stepping through them all, the preordained stars of the show—celebrities and politicians—are already making the rounds.

For the most ardent members of the American right the world the rest of us negotiate is not just irrelevant… it lacks the necessary authenticity to exist in the first place.

I spot Mike Lee, the senator from Utah who Donald Trump accidentally dialed during the height of the January 6 insurrection at the Capitol while so many lawmakers were hiding for their lives. Lee is walking quickly, with two people holding iPhones out in tow. He’s asked about immigration. “People come through the front door and the back door,” he responds. “But before you can even get to that, just look at the exploitation of human beings that’s being carried out by drug cartels.” He turns it into an attack on the Biden Administration. “They’re engaging in illegal activity that they’re  perpetuating.”

A few moments later, Madison Cawthorn, a 25-year-old representative from South Carolina, appears near the entrance. The youngest member of Congress, Cawthorn was partially paralyzed in a 2017 auto accident while traveling home from his college spring break. He stops to conduct an interview, in the middle of the media corridor, with One America News, which he appears on regularly.

The OAN anchor, a box-headed little man named Dan Ball, leans over Cawthorn. “This guy!” he says. “He’s taking the fight to the liberals, baby!”

Cawthorn pulls himself upright. “The really hard part of this thing,” he explains to no one in particular, “is that, when I’ve interviewed with him in the past, I just look in the camera. I don’t see him.” He points toward the lens. Then he cocks his head back and gazes up again again. “Normally I don’t see your facial expressions,” he tells Ball. “I don’t know what’s going on.”

The OAN anchor looks down and laughs. For the benefit of the small crowd he adds, as if delivering a punchline, “It’s true we’ve had a bromance for quite a while now.”

Six hours later, Buzzfeed News will release a longform investigation into a series of allegations accusing Madison Cawthorn of repeated sexual misconduct during his time as a student at Patrick Henry College. But none of this is so much as hinted at in the interview. Instead the topic is easy and well-defined: censorship—on social media, in Congress, and throughout the public square. Cawthorn talks about defending “real American values” against socialism. “They just put a wall up around the Capitol,” he says in well-practiced disbelief. “We’re here to fight.“

And this is how things will go, I can’t help but realize, for the rest of the morning and afternoon. In the larger world the news continues to roll in. More than 500,000 Americans have died from COVID. The new administration is carrying out drone strikes in Syria. The investigation into the January insurrection of the American seat of government moves forward.

But here in Orlando, it’s Year Zero; there’s no such thing as the past. Media Row itself is the message. At every joint in its vast fissured form the many parts to the whole are humming right along. There’s Tony Katz and the Morning News. Real America’s Voice. Ringside Politics. The Ben Ferguson Podcast. The Epoch Times. The Shepherd Radio. The Buff Show. The John Fredericks Show: Oracle of Deplorables! OAN. Breitbart. And Fox Nation, streaming live from its large corner suite.

Suddenly I find myself thinking of a passage in Joan Didion’s essay describing the 1988 Republican National Convention, which I recently taught again for the first time in years:

It’s just the start of CPAC in Orlando and already I can tell you that the attendees I’ve spoken with have all been saying the same thing: There is no such thing as a pandemic. The dead don’t exist in the numbers the rest of us recognize. The democratic system is rigged and beyond repair. Any violence inflicted on Donald Trump’s behalf is both necessary and just. The current president—Joe Biden, who’s been a public servant for more than two generations—is nothing more than a puppet of China. Or the CIA. Or whatever nefarious force you believe to be darkening the direction in which you’ve always imagined yourself heading.

The larger point is that the terms themselves don’t seem to matter anymore: the deep state, communism, socialism, pluralism… it could be anything, really. What matters is that the loop, in this setting at least, has long since closed. And for those inhabiting it—the most ardent members of the American right, perhaps 30 percent of our population—the world that the rest of us negotiate is not just irrelevant; it lacks the necessary authenticity to exist in the first place.

About an hour later, I’m standing again at the entrance to Media Row when I notice another commotion. At first I think it’s a publicity stunt. Already, before I arrived at today’s venue, an oversized, gold-painted statue of Donald Trump was wheeled through the corridors—a cartoonish exaggeration, replete with American-flag shorts, sandals, and, in his left hand, a star-shaped wand—something so garishly unreal, I’ll need to see it with my own eyes, hours later, to confirm.

But the people around me seem to be funneling toward a specific booth. After a moment it’s clear: Donald Trump, Jr., the 43-year-old son of the disgraced former president, is chatting with his partner Kim Guilfoyle in the Breitbart box.

Instinctively, I take out my phone and start recording. He’s standing in profile. Tieless. Bearded. His navy jacket unbuttoned. At the soft, substantial flesh of his upper chest, his dress shirt is noticeably strained.

The last time I saw Don Jr. it was January 6; from the crowd of his father’s supporters populating the frigid grass of the National Mall, I listened to him threaten the lawmakers certifying the election results. “We’re coming for you,” he shouted toward the Capitol.

And here he is now, standing as if outside his recent history of sedition we all so clearly witnessed, chatting happily in the run-up to his keynote speech in the ballroom beyond.

Thinking about all of this again—about CPAC’s ruthlessly self-generating present; about accountability; about the past and its constantly vulnerable shapes—I recall an article I recently read, published in GQ a few years back, on what it was like to grow up as the oldest son to a certain Donald John Trump, the details of which, recounted therein, are far too numerous and depressing to properly get into here…

“He stands just like his father,” someone in the crowd says.

And it’s true: Suddenly you can’t help but see it. In profile, there’s no avoiding Don Jr.’s inevitable future of heavy hips. Receding hair. Of loosening skin at the neck and waist. After all, what is a body—yours, mine—but a material memory: the physical knowledge of pain and age. Our everyday record. In this light, I think it’s safe to say that physicality is always a motherfucker—both personally and writ large.

It’s a sentiment that, at least on a day like this one, feels just haunting enough.

It’s only been a few hours here at the conference and it’s time to take a break from CPAC. I’ll be staying in Orlando another few days; the least I can do, I tell myself now, is limit my exposure.

Hell Among the Canceled: Day 2 at CPAC with Marjorie Taylor Greene 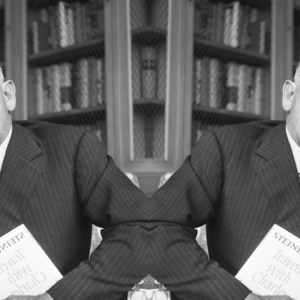 Introducing The Longest Year: 2020+, photo essays from the year that won’t end. Up first, Elissa Schappell reflects...
© LitHub
Back to top