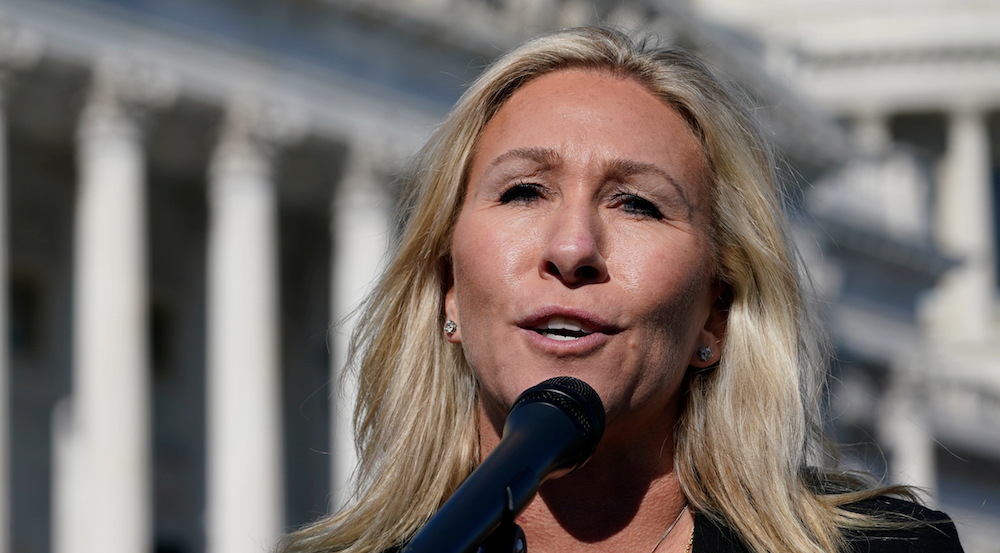 Hell Among the Canceled: Day 2 at CPAC with Marjorie Taylor Greene

Timothy Denevi Encounters the Party of the Opposition

The bullhorn starts up just after 11 am. “America first,” a man keeps shouting. “Trump won! Trump won!” From my room at the Orlando Hyatt, 19 floors up from the street below, his warbles through the window with unexpected immediacy, as if from just a few feet away.

It’s only when I head out on the balcony that things come into focus: a handful of the former president’s supporters are gathering at the hotel’s roundabout for a demonstration. Along the street below, vehicles—buses, motorcycles, vans, bikes, an elderly man’s electric wheelchair—never quite circling in tandem  but all decorated with Trump’s name, are making laps. I notice that, parked across the entrance, an oversized utility vehicle with the familiar orange visage emblazoned across its cab.

The little crowd began  to move, and crossing to the other side of the street, where another group has already set up shop: it’s a small, self-contained Black Lives Matter protest, situated along the sidewalk in the distance.

The truth is, I’m still pretty much half asleep. And really, even as the Trump supporters surround their intended target—shouting and shoving as they close in—it’s their flags that pull me awake.

MAGA flags. In the steady Florida breeze they’re like oversized sails, catching stiffly. FUCK BIDEN, one of them reads. Another: TRUMP 2024.

Now a long line of bicycle cops are approaching the intersection. They arrive and quickly separate both sides.

I grab my room key and head downstairs to see if I can catch what happens next. But by the time I make it to the lobby, the commotion has all but dispersed. Instead, the hallways and roundabout feel eerily calm. In anticipation of Donald Trump’s first full-scale public appearance since the January insurrection, the hotel is operating under a strict security lockdown.

Later in the day I’ll find out that, had I simply ridden a different bank of elevators down to the street, I would have stumbled upon Roger Stone, the recently pardoned Trump ally and former dirty-trickster for Richard Nixon, dancing  absurdly while, alongside him, a Trump supporter sings, “Patriots pulling up, knocking at the Capitol.” That truck I’d spotted earlier from my balcony—the one that had been decorated feverishly with our former president’s face—has been set up behind them as a backdrop.

The plan today is to lay low before making my way back to the conference hall for an afternoon speech by Marjorie Taylor Greene, the freshman representative from Georgia known for her tendency to propagate, among other things,  QAnon / false flag / Jewish space laser conspiracies.

In the meantime I decide to head down to the Hyatt’s expansive pool for some afternoon reading. At the entrance gate, fishing through my pocket for the room key the security guard is now required to check, I find myself standing next to Florida Congressman Matt Gaetz.

“No, understand—what they really want, is to cancel you.” The audience shifted and murmured, adjusting themselves to the idea that they had power.

Yesterday at CPAC, he said to the crowd, “The woke corporations have turned around and canceled us. I’m a marked man… a canceled man… but here I’m home. I’m a Florida man. And Florida’s like an amazing woman: adventurous, beautiful, mostly sunny, sometimes a little crazy…” Afterward he patrolled the long corral of media booths at the conference’s heart, offering himself up to any content producer he could find.

Now, positioned across from me at the narrow entrance to the pool beyond, Gaetz is dressed in a gray suit. His hair is styled foppishly, flaring past his ears, his sideburns tapering out just above his jaw. The truth is he’s standing closer than I’d like; without a mask he seems to be waiting for me to open the gate for him with my room key.

“Is he with you?” the guard asks me. She doesn’t seem to know who he is. Gaetz smiles at her, anticipating recognition.

I turn to face him. At his lapel, clipped against the dark fabric of his suit, a lozenge-sized medallion reflects the tropical light—the brassy pin that denotes his membership in the United States House of Representatives.

On January 6, at the height of the terrorist attack that Gaetz still refuses to disavow, dozens of his fellow lawmakers, stranded for over 40 minutes in the Capitol’s visitors’ gallery, huddled together to escape the approaching mob. When it became clear just how close the insurrectionists were to taking over their position—three doors removed, then two, then one—Congressman Jason Crow, a former Army Ranger representing Colorado’s 6th Congressional District, turned to his colleagues and shouted, “Take your pins off!” That way, if the mob did catch them, there’d be nothing to identify them as members of the congressional body they’d come to kidnap, capture, and kill. Without their pins, the lawmakers stood a chance.

As I let myself through I can hear Gaetz laughing. Later I’ll see him circling the pool in his suit jacket and slacks, sweating in the sun as women and men in swimsuits repeatedly ask him, without the slightest hesitation, if he’ll pose with them for a selfie. He always says yes.

I went into Saturday afternoon’s speech by Congresswoman Marjorie Taylor Greene expecting things to get weird—that’s her brand, after all.

The room assigned to her was small and overheated, forcing the crowd, most of whom refused to wear masks, to jam in together. There didn’t appear to be a functioning live stream. Her audio feed to the speakers wouldn’t link up. Earlier in the day, on the CPAC app as well as its corresponding website, her name had completely disappeared from the official listing. Whether this was an attempt by the conference organizers to limit their legal liability, I’m still not sure. All I can tell you is this: from the very start, Greene, a five-foot-three-inch former CrossFit competitor from Alpharetta, Georgia, held the room at attention. In that small space, no larger than a church basement, her voice rang out.

“I am the most canceled member of Congress,” she announced by means of an introduction. “They even canceled my microphone.”

What followed was predictable but still registered as a jolt. Story after story, she cast herself as a hapless truthteller, a normal American, a mom, someone who saw things simply because things were simple. Congresswoman Marie Newman, Georgia Senators Ossoff and Warnock, they all became stand-ins for anyone who made you feel out of place or turned away. “Right now,” she explained, “it’s like we have only one restaurant, and every time we go they spit in our food and beat us!” She said, to a crowd that whooped its pleasure. “And I don’t know about you, but I’m getting pretty damn tired of it.” The nods in response were solemn.

And everything and everyone she didn’t agree with was communist. “Corporate communism!” she said about airlines that required you to wear a mask. “District of Communism!” she rechristened Washington, DC. And California—“It’s Commufornia!”

The mainstream media, the Democrats, sure, they’d tried to cancel her. But it wasn’t about her, she wasn’t that important. “No, understand—what they really want, is to cancel you.” The audience shifted and murmured, adjusting themselves to the idea that they had power.

“You all have a job,” Greene told them—it was to make sure their representatives in Congress did their jobs. “Well, call your governor!” Greene said impatiently to a woman in the crowd who wasn’t sure who her congressman was. The point was that DC worked for them, and she offered a gesture in the way one might shorten a leash.

And she made a promise. To her colleagues who had voted to strip her of her committee posts—and to the Republicans who had voted to impeach Trump—she was going to be on their doorstep. “I’m gonna play hard in these upcoming elections. I’m gonna travel the country. And I promise, the people who voted against me aren’t going to like me very much.” The crowd nodded and clapped and cheered in assent. “And these ten people” she said of the eleven Republicans that voted against Donald Trump, “They aren’t going to like me much either.”

Then she pulled out a collection of “Impeach Biden” masks and held them up for everyone to see. “Never apologize!” she shouted, and began handing them out.

I recorded it all, holding my phone at my chest. And while there’s so much more to be said, I think it’s important to clarify something I’m still in the process of unpacking:

The people in that room had come there to be consoled. They were afraid. What they had wanted—for themselves, for their country, for their future—no longer seemed to matter. “How can the Democrats do that?” asked one woman, hands pressed into her lap. Marjorie’s answer? “Stop asking why.”

All weekend these attendees had fed on grievance but had no outlet to make their anger actionable. Marjorie understood. She got it. But she wasn’t going to coddle them: “Don’t get down, don’t give up—Make them listen!”

And in that sweltering undersized ballroom, the audience, rapturous and contemptuous, glowed.

Read Timothy Denevi’s account of day one at CPAC here. 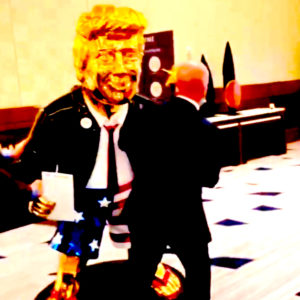 It’s Friday morning, the kickoff to the 2021 Conservative Political Action Conference, and one thing is clear from the start:...
© LitHub
Back to top