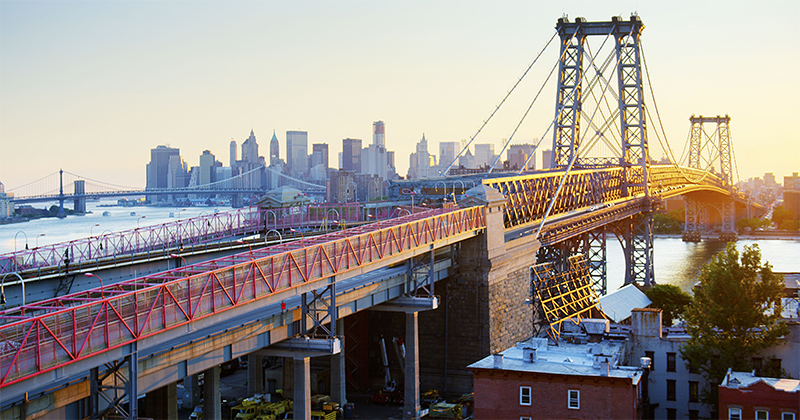 On Seeking Solitude in a Crowded City

I wake up, pour myself a cup of coffee, and decide I need to walk the bridge. It is a feeling of urgency—the kind of pull I must answer, otherwise something might go wrong.

I check emails. I make a list of to-dos. I scramble two eggs. Despite my strategizing, I can’t seem to put on my face-the-day. Can’t seem to muster the ability to get over. Another overdraft notification from my bank, another pile of laundry, another “thanks but we’ve gone with someone else.” A sinking feeling hits my stomach. I can forfeit my bullish ambition and leave the city, but the idea overwhelms me. To where? To what? My chest tightens. I need somewhere to be. This morning, I have to get to Lower Manhattan by way of the Williamsburg Bridge before making any other choices.

One foot in front of the other—so they say when they talk about loss, when they speak of moving on.

En route to the bridge, I pass through the fading Polish community of Greenpoint, taking note of one establishment after another that’s been replaced. How different will it look before too long? Will all of what was be forced out? I head south into Williamsburg, with its brunch lines and designer retail shops. I sense my participation in a generation’s way of being—concerned, firstly, with holding up the surface. I count off tourists who’ve come to scope the trends. They’ve come to take pictures. I hear the whole scene has changed. I wonder about my friends. Wonder if they ever talk about how I was, about how I used to be. I wonder what it means to live in North Brooklyn.

I had another life once, one in North Carolina where I walked the yard barefoot most days, where I slept at night. I had a house and a dog and a car and a steady job. I had a husband, too, but he left with someone else and took with him the dishes we unwrapped after our wedding, and along with them my ability to stay in a town full of memories to forget. I couldn’t leave the house without having to admit to someone what’d happened. I eventually found myself packing a bag, having become one of those people with nowhere to go but elsewhere.

I’d been to New York. I’d been to the top of the Empire State Building and sailed past the Statue of Liberty. During the trip, I’d also sworn off the city as no way to live. I couldn’t imagine making rent, much less having a good time. This was before. Prior to accepting a room in Brooklyn and, along with it, the betrayed resolution of my youth.

I reach the bridge eventually, noticing the bikers, the runners, the speed walkers—those who find value in breaking a sweat on concrete. Trains pass through the metal monument and I lie to myself for a moment that I feel grateful for them. Cars and taxis and 18-wheelers traverse at a decent pace for the time of day, with momentum always headed towards Manhattan. I sense each person on the bridge, in one way or another, trying to find a way into the possibility of themselves. I hate the city less when I consider this.

More pink than red, a fence encloses the footpath, set against metal trusses. The pathway is littered with spray-painted conversations, WILL YOU MARRY ME not far from DREAM not far from DICK—what John Edgar Wideman called the “noisy chaos of words.” The wind hits, cool and strong, and the East River shifts beneath me as the structure shakes under the weight of relentless traffic. I take time to breathe into the severity of it, into the aloneness of it.

“Nobody was there and it was beautiful,” said jazz saxophonist Sonny Rollins about practicing on that bridge in the 1960s. He did his woodshedding there. He came to blow his horn, came to work through it. Wideman’s narrator in his short-story Williamsburg Bridge moves through the what-has-beens of the life offered to him as he passes over the bridge, lost in everywhere kinds of thoughts. Certain he happened upon Rollins on his sax once, the reflective walker found Rollins “practicing changes” to get himself together to be “a good thing for anybody to do.” I head to the bridge to meet circumstance, to assemble thoughts one after another until smooth. I gather the remains of myself, determining who I might become when I walk off.

I thought about jumping once, but didn’t take to the idea.

Besides getting to the other side, I don’t have much of a plan. The spanning structure and I share some secret. I think about all the bridges everywhere, all the places I could have been, all the lives I could have led. A pair of tourists interrupts me to photograph them. I want to ask if it’s what they expected, the view. I oblige their request, careful to avoid the oncoming runners. I wasn’t supposed to be on this bridge.

Katie Shepherd is an audio producer for the Stitcher Premium podcast “Jessamyn Explains It All.” Her work has been featured on The Guardian, BBC Radio 1 and The New York Times. Originally from North Carolina, she currently lives in Brooklyn and is a graduate student at Columbia University.

How should a literary adaptation be? We asked the critics for an answer. | Lit Hub Regarding the pain of women:...
© LitHub
Back to top