Like many eight-year-olds, my son Griff is deeply obsessed with the Harry Potter series. Each night before bed, we used to read about 20 pages of one of the books, and then we would spend a fair amount of time the next day talking about characters and plotlines. Griff spoke of the characters with great affection, made guesses as to what he thought would happen next, and it was nice to have something to talk about other than Pokemon Go.

His first literary crush was Hermione, which I realized only after Viktor Krum takes her to the Yule Ball in The Goblet of Fire. That same night, in the dark, Griff said to me, “Dad, I don’t really like Viktor.”

“Oh, no?” I asked, realizing what was happening.

These emotions died down after he became fascinated by Luna Lovegood.

Recently, however, while we were reading the opening pages of Harry Potter and the Half-Blood Prince, Griff had a meltdown that caused me to question whether we could continue.

When Griff was six, I started reading Harry Potter and the Sorcerer’s Stone to him. I had read the entire series five years prior after one of my favorite students loaned me every one of the titles on audiobook. I loved them, wished that they had been around when I was a child. And so Griff and I started the first book. I immediately remembered something that had up to that point seemed like a minor issue. Harry’s parents were dead. Right from the start, they were stone-cold dead. As parents do when reading books, I edited on the fly. A few pages in, I read, “The rumor is that Lily and James Potter are—are—that they’re . . . missing.”

“Yes,” I told him. “I guess Harry’s parents went missing.”

“Will he find them?”

“I guess we’ll need to read and find out.”

I wish I had not done this. I wish I had talked to Griff about it and tried to decide if he wanted to keep reading. Or, maybe, I wish I had waited until he was older to read the books. But he was interested now, wanted to know how this was all going to turn out. So we moved forward. It took some doing, but I managed to get a few hundred pages into the book with only some creative editing.

One night, Griff stopped me in the middle of some random sentence and asked, “Are Harry’s parents dead?”

“Are they dead?” he asked again.

“Voldemort killed them?” he asked.

“Why did you think about that?” I asked him.

“Some kids at school told me.” Several of his friends had seen the movies or were also reading the books.

“Do you want me to keep reading?” I asked him.

“Yes,” he said, though I could tell that he was still processing this new information, trying to work back through the book to figure out what he’d missed, what I’d kept from him.

And so we continued through the first two books. He loved them, and I loved reading them with him. But I knew that they would get scarier, that no amount of editing would hide necessary plotlines from him. So we stopped. I told him we’d read more when he got older. And Griff, who is sensitive and lovely, knew there must be a good reason to wait.

Griff’s middle name is Fodder-wing. When my wife Leigh Anne was pregnant, we started thinking about what we would call him. I had wanted to name him Captain America Wilson. “We’ll call him Cap,” I told her. She decided that, in the interest of preserving the child’s dignity, that we would each choose one of his names. She chose Griffith, after her father. It was my turn. “Fodder-wing,” I said. She did not pause. “Okay,” she said. She knew my love of this name, the source of the name. And so our son was born, and on the birth certificate it reads Griffith Fodder-wing Wilson.

Fodder-wing is a character from the favorite novel of my childhood: The Yearling by Marjorie Kinnan Rawlings. He is not the main character; that is a boy named Jody Baxter, who adopts a fawn and cares for it. Fodder-wing is Jody’s best friend, who is a boy with a physical disability, a hunched frame. He received his injury—and his name—when he jumped off the roof of a barn with wings made of hay, attempting to fly. Adults believe that Fodder-wing is “crazy” because of the odd stories that he tells, stories that enrapture Jody. Fodder-wing is also known for his ability to commune with animals. As a young boy, I loved Fodder-wing without hesitation. I wanted to be him more than any other character in literature, even though Fodder-wing’s fate is not a happy one. I thought that if I could be as strange and wonderful as him, it would be okay if I died young. I remember crying over Fodder-wing’s death, each of the dozen times that I reread it, but I also felt comfort in the knowing of him, however briefly.

There’s a moment in the book when Jody is anticipating what it will be like when Fodder-wing names his fawn. “After a long time Fodder-wing would speak, and what he said would be perhaps peculiar, but it would be beautiful.”

As a child, this was all that I wanted. I knew that I was peculiar, but it would be okay if it was offset by beauty. And this was what I wanted for my child as well—to be peculiar and beautiful.

Now that Griff is eight, we’ve steadily moved through The Prisoner of Azkaban and The Goblet of Fire and The Order of the Phoenix. There are deaths, deeply troubling deaths, and there is darkness, but we had weathered them in the service of the story. Griff loved these thirty minutes every night, and so did I.

Griff told me pretty soon after we started The Goblet of Fire that he knew that Dumbledore would die. Of course, his friends had told him. There is nothing that children love more than spoiling stories; Griff does it constantly as well. “Which book does he die in?” he asked. I couldn’t remember. “I think Order of the Phoenix,” I said. He prepared himself for that eventuality. When it didn’t happen, because I had misremembered, he was elated.

Griff started to tear up. “But I don’t want him to,” he said.

“Okay,” I said. And so we started The Half-Blood Prince.

Something had changed. Griff now wanted to know, in advance, who it was that killed Dumbledore. “Is it Snape?” he asked. “Judah says that Snape kills him.”

“We just have to wait and find out,” I told him.

“Is it Draco? Someone told me that it’s Draco.”

“Is Snape bad or good?” he asked, growing manic.

“It’s complicated,” I said, stumbling. He did not like this. Complication made Griff angry.

“He’s good, okay?” I finally said, quietly. “He’s good, though he seems like he’s bad, and you’ll see by the end that he was good. I promise that he’s good.”

“I don’t believe you,” he replied.

So that night I pulled up Snape’s Wikipedia entry, and we sat in bed with the computer and he scanned the entire entry, spoiling whatever was left of Snape’s narrative. Griff wept loudly, without stopping, and I could not comfort him.

I thought about these next two books, how many of the characters would die.

“We’re going to take a break from these books,” I told him.

“No!” he shouted. He was trembling now, his whole body vibrating. His teeth were chattering.

“We’re going to put them away and I promise that we’ll read them, just not right now,” I said, and finally Griff, still crying, his face so red, accepted this decision. I stroked his hair and leaned over him in his bed. After about ten minutes, he had quieted.

Griff was quiet for a second. I believed that he held me responsible for his unhappiness. I accepted this. It was perfectly reasonable.

“What are we going to read instead?” he asked.

I know that one day I will read The Yearling with Griff. I have held off on it because I know how strange and difficult it will be, for Griff to meet and perhaps love his namesake as I do, and to then see that boy die. I don’t know that I can bear it; I know that I cannot bear it yet. But one day, the two of us will lie down in bed, with the old copy that my grandmother bought for me right after Griff was born, and we will read the book. And all I can hope for, even with the loss that is coming, is that Griff can see the peculiarity and beauty of the world and how amazing it is to live inside a book, knowing that everything will be okay, because we’re reading together, the two of us, going wherever the book takes us.

all good children's lit has at least one dead parent at the startbedtime readingchildhood readingdeathEccofathers and sonsHarry Potterparenthoodpartnersthis probably doesn't really need a spoiler alert
Share:

All Our Wrong Todays 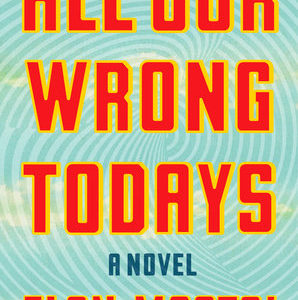 All Our Wrong Todays

10 I guess now is as good a time as any to mention that my mother, Rebecca Barren, died four months ago in a freak accident. Yes,...
© LitHub
Back to top