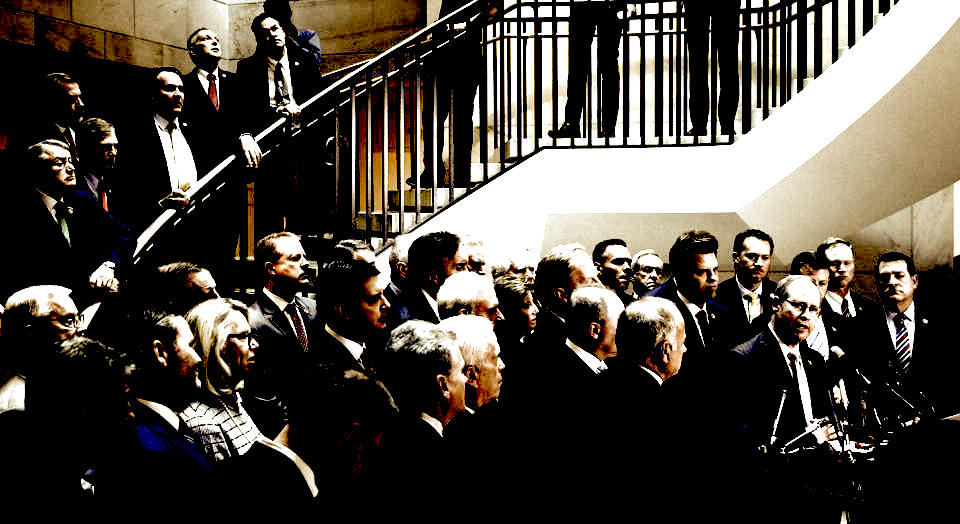 For the last three years (and counting), the words and deeds of the Trump White House have been so outrageous in their transparent turpitude that the job of satirists—exposing hypocrisies and highlighting misbehavior—has been stolen by the president and his GOP stooges, who daily expose themselves (double-entendre intended) in front of an audience that spans the globe, mooting the job of the comic. In so doing, this administration has kicked not only comedians but historians to the curb; its actions enter the record as farce; history and tragedy will have to scramble afterwards for their position on the scroll.

Luckily, a titan of travesty lurks in the wings who understood, four centuries ago, that history and tragedy stand knee-to-knee in the soft-shoe shuffle of human vanity and perfidy. I refer, of course, to William Shakespeare, whose plays anticipated pretty much every devious act that a king, queen, bawd, knave or varlet might get up to. And here’s where things get funny. Do you know that the very first play Shakespeare wrote (well, according to Coleridge—and can a fact be anything but “alternative” to a poet?) featured a pack of vain, equivocating, power-hungry lordlings who disguised themselves as Russians to fool a band of wise, eloquent women? The play is called Love’s Labour’s Lost, and if you haven’t seen it on the boards, you can catch the sequel on television any time you turn on cable news.

This comedy was first performed at the court of Queen Elizabeth I at Christmastime in 1597. She seemed to get the joke, although the play was a little too recherché to catch on with the pub-going crowd in the way The Taming of the Shrew and Twelfth Night would later. That’s possibly because Shakespeare wrote the play soon after he had left off teaching Greco-Roman history and rhetoric to schoolboys. By one theory, the debates of the ancient philosophers were on Shakespeare’s mind when he put pen to parchment; so he decided to illustrate their clashing principles by staging a battle of sophistry versus philosophy, hidden within a dating game. He had his male characters speak in the prevaricating language of sophists (Cleinias, Pythagoras), and granted the female characters the insights of true philosophers (Socrates, Democritus, Heraclitus). Spoiler: the female philosophers totally pwn the male sophists.

This autumn, that play’s basic premise has been re-enacted hour after hour in Congressional impeachment hearings and their sideshows, as guileful backers of this administration’s ruses have matched wits with doughty defenders of the rule of law. This new spin on Love’s Labour’s Lost is not exactly a thigh-slapper; but with an unrepentant pussy-grabber in the Oval Office, that may not be a bad thing. Far more profitable to seek the 16th-century brand of LOLcom that Shakespeare was aiming for: “the work of learned men addressed to learned men,” which emphasized “the philosophical lessons in human conduct to be gained from literary comedy.” (That’s from the late Shakespeare scholar Marvin T. Herrick, in case you wondered.) Are you laughing yet? As the sophist Cleinias once said ruefully to Socrates, after losing an argument, “Well, this is just a little game of learning.” Perchance it is; yet it’s a game that, in this staging, will have consequences.

Four modern-day players have emerged in the ongoing DC update who resemble (sort of) the leading ladies of Love’s Labour’s Lost, who journeyed from Aquitaine to the court of Navarre (in the Pyrenées, FYI) in search of straight talk from the King—not knowing that Navarre and his amigos had colluded to “lose our oaths to find ourselves” before la délégation set out. The first of the Washington heroines to make her entrance was the double-crossed diplomat Fiona Hill—Cleopatran in bearing, stern and regal as an image on a Roman coin—who entered the spotlight on October 14. She rebuked members of Congress for spreading a “fictional narrative” that served the interests of the Kremlin; which she said was a lie “perpetrated and propagated by the Russian security services.” What was this lie? That Ukraine, not Russia, had interfered in the 2016 election—a malicious fabrication that contradicted the findings of 17 US intelligence agencies.

Fiona Hill’s counterpart in Love’s Labour’s Lost is the Princess of Aquitaine, who challenged the kiddish king for failing to deliver on the quid pro quo he’d squeezed from her country, once he’d gotten his quid. “I do protest I never heard of it;” Navarre dissembles, adding, “If you prove it, I’ll repay it back.” Sound familiar? While the king has refused to give the princess and her posse an official invitation to the castle, forcing them to camp in tents, he can’t resist finding out what they’re up to. So he and his gang dress as Russians and invade the encampment, hoping to hoodwink the ladies through their subterfuge. But the Princess sees right through him, chiding: “Nor God nor I delights in perjured men.” When the king protests that she’s the baddie, not him, and that it was her virtue that made him stumble, she contradicts him sonorously: “You nickname virtue, ‘Vice’ you should have spoke;” she says, “For virtue’s office never breaks men’s troth.”

Four modern-day players have emerged in the ongoing DC update who resemble (sort of) the leading ladies of Love’s Labour’s Lost.

On the next day of the hearings, October 15, another heroine stole the show; the former US Ambassador to Ukraine, Marie Yovanovitch, who was ejected from her post in Kyiv last May without cause, and who in Washington radiated the rectitude of the wronged Hermione from The Winter’s Tale. (Cliff’s Notes refresher: Hermione’s paranoid husband, King Leontes, groundlessly accuses her of infidelity and throws her in prison.) “I had no agenda other than to pursue our stated foreign policy goals,” Yovanovitch humbly stated. Grilled by a sophistic inquisitor, who asked if Trump’s henchmen might plausibly have believed that Ukrainians, not Russians, were the troublemakers in 2016, she softly replied, “Our own US intelligence community has conclusively determined that those who interfered in the election were in Russia.” Rosaline, in the Aquitaine tents, protested similar posturing more fierily: “Let us complain to them what fools were here, / Disguised like Muscovites in shapeless gear; And wonder what they were, and to what end / Their shallow shows and prologue vilely penned…”

After Thanksgiving, constitutional lawyers descended on Congress to discuss whether the evidence presented thus far justified impeachment. One scholar, the Stanford law professor Pamela Karlan, denounced the ranking member of the House Judiciary Committee, Doug Collins, for rudely, falsely asserting that the legal experts had not read the evidence. “I would not speak about these things without reviewing the facts, so I’m insulted by the suggestion that, as a law professor, I don’t care about those facts,” Karlan declared. She would “not suffer this rude knave, now, to knock [them] about the sconce with a dirty shovel.” That was Hamlet, of course; but in Love’s Labour’s Lost,  Katherine of Aquitaine had preferred another rebuttal tactic: in Navarre she traded insult for insult, characterizing the warped words of her opponents as: “A huge translation of hypocrisy, / Vilely compiled, profound simplicity.”

All of this comes off funnier in the Shakespeare; but that’s because the backdrop of his verbal sparring is love, which isn’t true of the fight in Congress. Or is it? On December 5th, after announcing that the Judiciary Committee would immediately start drafting articles of impeachment against President Trump (which they duly delivered December 10th), the Speaker of the House, Nancy Pelosi, was waylaid by a contentious questioner as she departed the dais, who asked: “Do you hate the President, Madame Speaker?” She stopped. “I don’t hate anybody,” she told him emphatically. Returning to the stage for a charismatic cameo, she continued: “I was raised in a way that is a heart full of love; and always pray for the president.”

Almost immediately, the President refuted her professions of love and prayer, via tweet, “I don’t believe her, not even close,” he twat. She responded viva voce: “The President is a master at projecting;” which, while it may not be Plato, beats Bluto soundly. Then again: Plato’s Socrates likely would have sided with Nancy, fed up as he was with his circular discussions with the fallacious Cleinias: “I have no objection to your giving names any signification which you please,” Socrates complained, “if you will only tell me to what you apply them.”

Plato’s and Shakespeare’s dissemblers may have been willing to listen to reason; but what of Trump’s bros—Doug Collins? Jim Jordan? Mitch McConnell? Rudy Giuliani? Bill Barr? Could the Bard change their minds? In Love’s Labour’s Lost, the king’s best bud, Berowne, makes a case for believing the Speaker, and for that matter, Hill, Yovanovitch and Karlan:

From women’s eyes this doctrine I derive.
They sparkle still the right Promethean fire;
They are the books, the arts, the academes,
That show, contain, and nourish all the world.

But Berowne was a romantic, fond of women, not to mention books, arts and academes—which is something you can’t take for granted these days. And, after all, Love’s Labour’s Lost was a comedy. Whatever the fine points of 16th-century theater, a comedy in Shakespeare’s day had to have a happy ending; something that isn’t required of the skits and riffs produced by today’s beleaguered late-night comedians, who must process presidential pellets of nonsense that arrive like balls shot from a haywire tennis machine. But unlike its comic ancestor, the adaptation of Shakespeare’s play now unfolding in Congress has no certain outcome, not even a certain genre. Will it prove comedy, history, or tragedy when the curtain falls? Can we vote on it?

Liesl Schillinger is a New York–based critic, translator, and educator. She grew up in Midwestern college towns, studied comparative literature at Yale, worked at The New Yorker for more than a decade and became a regular critic for The New York Times Book Review in 2004. Her articles and essays have appeared in The New Yorker, The New York Times, The Washington Post, The Atlantic, Foreign Policy, New York, Vogue, The London Independent on Sunday, The New Republic, and many other publications. Her recent translations include the novels Every Day, Every Hour, by Natasa Dragnic (Viking, 2012), The Lady of the Camellias, by Alexandre Dumas (Penguin Classics, 2013), and Free Day, by Inès Cagnati (New York Review Books, 2019). 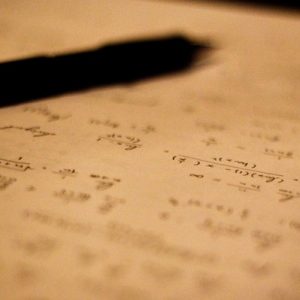 How a Mathematical Model Rescued My Book About Math I was 40,000 words deep when I realized that my book was not working. Titled Poet’s Calculus, it was a tour of the concepts...
© LitHub
Back to top