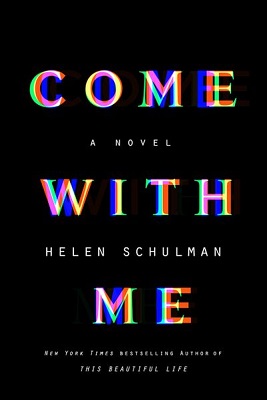 The following is from Helen Schulman's novel, Come With Me. Set over three non-consecutive days, the novel is a dark comedy that follows Amy, a part-time PR person, her husband Dan, an unemployed journalist, and their three sons. Helen Schulman writes fiction, nonfiction, and screenplays. She is a Professor of Writing and Fiction Chair at the New School.

She pushed her sunglasses up onto the top of her head. The super-bendy photochromic lenses were constructed out of something called NXT, which had been invented by the army. Designed for battle, this pair was also great for trail running, deflecting slingshotting branches from scratching her eyes out, and mitigating the rapid-fire one-two shock of shadow and blazing sunshine during high-intensity sprints in the woods. Now she was using the sunnies as a headband; they pulled the escaping wet wisps of her ponytail off her forehead and behind her ears. Still, she rewrapped and twisted the whole sweaty, tangled, mess up into a bun so it was high off her neck, and sat the glasses on top again, too. A little plastic crown.

“What do you want to know?” he said. He was tapping on his smartphone. His feet, in Adidas flip-flops, were tapping along with his fingers.

He didn’t look up. Why should he? He wasn’t a feelings kind of guy. He was forever young, at least at that moment, so this was boring and he wasn’t listening anyway. She sounded like someone’s Aunt Sadie; she wouldn’t listen to herself. “Then for a long time, I didn’t want to feel any of it. But now I am at a point.”

They were meeting on campus. Tresidder Union. She’d insisted. She didn’t want to have this conversation at the office. It was 11:00 a.m., on a Saturday, spring quarter, most of the coders probably had already stumbled their way out of the dining halls and onto their bikes and then off their bikes and into work. Sometimes some of them didn’t even bother returning to the dorms on Friday nights, they slept in the office on the couches, arm wrestling over the hammock, the beanbag chairs.

He didn’t look up. Why should he? He wasn’t a feelings kind of guy. He was forever young, at least at that moment, so this was boring and he wasn’t listening anyway.

She pulled her shorts down farther on her legs. The flesh of her thighs was sticking to the metal lattice of her seat and she could feel it puffing like Play-Doh through the grille. The morning was growing warm. Good thing she’d already finished her workout. They sat outside on the deck of the student union at a round white table with three red wiry chairs surrounding it, leaving one empty; now he was using it as a footrest. These oddly floral configurations dotted the cement terrace in a utilitarian, but somewhat attractive manner. Very Marimekko. Most of the seats were already occupied, the sun was bright and the air was dry. Kids on their computers, their iPhones. Profs on their computers, their iPhones. Some older guys, nerdy in bike helmets, with short-sleeved button-down shirts and even pocket protectors, were reading actual newspapers. At the base of the steps, a young Korean mother was sharing her muffin with her toddler twin girls. So cute, they each wore matching hickory striped overalls, and pigtails, although the one in the red T-shirt had one plait that went north and the other south, like a cockeyed weather vane.

She remembered those days—there never was enough muffin to go around, there was never much left over for her. She was thinner then.

They’d met at the Starbucks inside. “First Starbucks on any campus anywhere,” he’d bragged for the ninety thousandth time while they stood in line. As if she didn’t already know this, everyone who lived in the area knew this, she’d been living here far longer than he had. He ordered; she paid. He was drinking a Teavana Shaken Iced Passion Tango TM Tea Lemonade. She had a Clover-brewed coffee; those were invented by a bunch of caffeine-craving graduates.

Product-design majors, she figured. Single-cup coffeemakers. They cost a zillion dollars. She had hers with milk. Her husband called that “Regular, no sugar,” which in some way was how she might describe herself. Regular, no sugar.

When the Clover machines were introduced at the first campus Starbucks on any campus anywhere a few years earlier, well, you would have thought those boys actually found God.

“What does the TM stand for?” she wondered out loud. “Transcendental Meditation?”

“You said you had all this info on me,” she said.

“To make money,” he said. “I need to know if you’ll care enough for your eyeballs to get sticky.”

“So how do we begin?” she said. “You said, ‘infinite chances, infinite universes.’ How do you tease the important stuff out?”

He nodded. For the first time that morning, he looked, well, serious. Less spectrumy and more engaged. Like he didn’t live on planet Pluto, but right there where she lived, like he lived somewhere on Earth beside her.

She sighed. This was the easy part. She thought about it almost every day. She’d had a therapist once who said the best thing for her to do was to sweep the obsessive thoughts away. For the past twenty-three years, she had been sweeping.

“What would have happened if she’d lived?”

He looked at her Petite Vanilla Bean Scone. He’d already eaten his Ham & Cheese Savory Foldover. She guessed he was still hungry. She pushed her pastry toward him. He took a bite. Then, with food in his mouth, a chalky paste, he said, “That’s all?”

“There are no other questions,” she said.There were crumbs on his chin and a whitish spume in the corners of his lips. As if he were foaming at the mouth! She swallowed the urge to pantomime dabbing her own mouth with a napkin or just reaching out and dabbing his. But she wasn’t his mother.

Which was true. More questions were soon to follow.

From Come with Me. Used with permission of HarperCollins. Copyright © 2018 by Helen Schulman.

Kiese Laymon: Surviving the Failures of Others 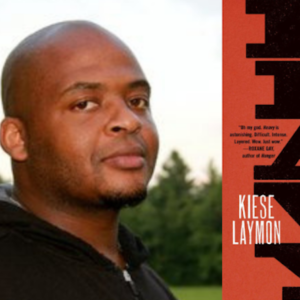 Kiese Laymon: Surviving the Failures of Others Kiese Laymon’s Heavy first appeared on my horizon via a series of separate Tweets from various writers I follow. My first...
© LitHub
Back to top