Chris Jackson on the Privilege of Being an Editor, and Publishing’s Systemic Problems

On December 3, Chris Jackson, accepted The Center for Fiction Medal for Editorial Excellence. Chris Jackson is the publisher and editor-in-chief of One World, an imprint of Random House. He’s the editor of a wide range of award-winning and bestselling authors, including Bryan Stevenson, Ta-Nehisi Coates, Jill Leovy, Trevor Noah, Nikole Hannah-Jones, Ibram X. Kendi, Valarie Kaur , and Eddie Huang. His own writing has appeared in The Paris Review, Callalloo, The Atlantic.com, and other outlets. He lives in New York.

Thanks to Ta-Nehisi, who I’m sure has said something really powerful and deep with meaning about the world, or something very rude about me personally. But I know either way, it was done with love. Thanks also to the Center for Fiction, who for some occult reason, decided to present me with this award. The confusing part is that I still consider myself sort of new to this business, and not really ready to receive a Lifetime Achievement Award, or maybe, in some critical ways, I still feel very much outside of this industry. Some part of me still considers my career a deliberate act of spite against the literary world.

But I’m accepting this award on behalf of the writers I’ve had the privilege to work with over my career, who have written, to my very biased mind, some of the most important books of the last many years. From Trevor Noah to Ta-Nehisi Coates, Bryan Stevenson to Karla Cornejo Villavicencio, from Jay Z to Victor LaValle, from Jill Leovy to Mona Hanna-Attisha, Ibram Kendi, Eddie Huang, Alicia Garza, and on and on and on.

And I’m sorry if you’re one of the authors who just got shoehorned into “on and on and on” but I don’t have a lot of time. But I love them all, and I’ve learned so much about how to find meaning, and joy, and justice, and clarity in the chaos of this life, and I’ve learned from their readers too that the things that have taught me, and moved me, and seen me can teach and move and see millions of others. As I’m sure every editor and writer can attest, there’s really nothing quite like seeing a reader with a book you worked on, knowing that the book is now working on them.

When I helped my ex-partner to open her first bookstore, McNally Jackson, we put a James Baldwin quote on the first bookmark: “You think your pain and your heartbreak are unprecedented in the history of the world, but then you read.” The immense privilege of working as an editor is to be there at that point of connection between the writer and the reader, the moment when the author’s work of creation or co-creation with the editor enters its next act of co-creation, where the author’s consciousness mingles with the readers, another generative act of meaning-making, the miraculous work of our stories. So thank you to the authors who I’ve worked with, and the readers who I’ve read with. It’s been a pleasure to create with you all.

Books are a salvation, many of us say, but in some ways, they’re saving us from other books.

I thought about making this quick thank you a tribute to the library nestled in the housing project I was raised in, a second home for me as a child, the place where I first discovered this repository of meaning-making technology. But I hate nostalgia. The world I grew up in, the world we all grew up in, has not earned it. This award was once named after Maxwell Perkins, as many of you know, as may have already been discussed. When I got my first job in publishing, the editor who hired me sent me home on my first day with an essay about Perkins, who I’d never heard of, but was presented to me as the model for an editor, the “Editor of Genius,” of Fitzgerald, of Hemingway.

But of course, as we now know, Perkins was also the editor of books on eugenics, which Scribner published just as eagerly. Books about the genetic inferiority of black people, immigrant hoards, of Jews. I thought about how those things could co-exist, a dedication to literary excellence and a warped, twisted, violent moral imagination. Honestly, the industry I entered on that first day, an essay on Perkins in my hand, was haunted by those two ideas. A high self-regard about the importance and power of the written word coupled with, not to put too fine a point on it, white supremacy.

I’ve seen across my career the struggles of my black colleagues to stay in a business that always felt hostile, not built for us, in the rare events that we were hired at all. I saw authors of color whose books were pushed to suit the perceived needs of a white narrative, to fit the sensibilities of what some editors have thought of as their ideal reader. I saw this done by editors who had the most exacting literary standards, or so they thought, because they were also burdened by ignorance and biases, and even worse, they allowed themselves to be sloppy, unscientific, careless, and stupid when it came to certain subjects.

The Editor of Genius, Max Perkins, published books of unscientific, poorly reasoned nonsense, but books whose ideas had violent, lethal consequences for the country, for people like me. This was the industry standard. The library nestled in the foothills of Grant Housing Project was half-filled with poison. The country we live in today, informed in fact and imagination by an industry haunted by the ghosts of its past, is exactly what you’d expect.

But it was only half-filled with poison, half with the antidote. Books are a salvation, many of us say, but in some ways, they’re saving us from other books.

I’m very pleased to be the first recipient of this new award, not named for Perkins. The thrilling thing about the past is we can abandon the parts of it that don’t serve us and imagine something new in their place. Book publishing is the ideal place for that kind of imagining. Our industry is full of bright, dedicated, creative, inspiring people. I feel like the colleagues I have today, editors, publicists, marketers, production editors, lawyers inspire me everyday in a way that I’ve never felt before in my career. And additionally, suddenly, it is an industry full of new blood and perhaps exorcised of some old ghosts. The publishing industry that serves us all, that helps us better imagine ourselves into each other’s lives, better see and understand each other, and create a better world is ours to make. Thank you again. 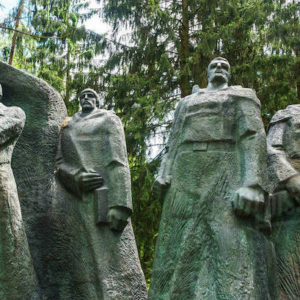 No matter how much we might wish to, there is no escaping the monsters of our past. We might try to ignore them, or bury...
© LitHub
Back to top