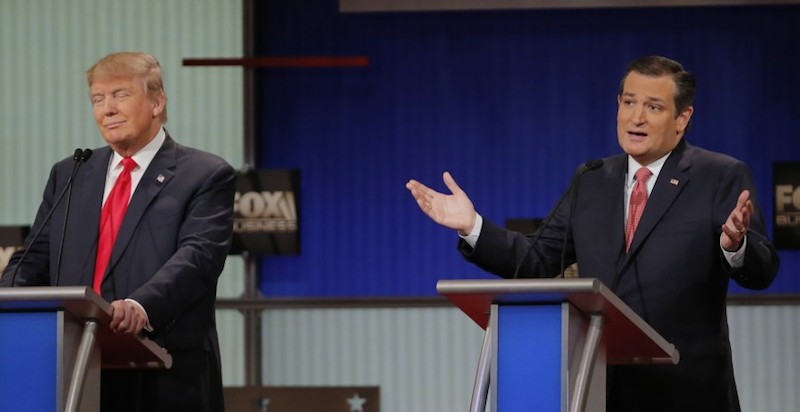 Cheats, Liars, and Madmen: “New York Values” and Other Lines

As the presidential election year begins, we are honored that Literary Hub continues to depend on us to point out and translate the deliberately deceptive language—or Spinglish, as we prefer to call it—employed by the candidates during the Primary Debates. The January 14th Republican confab in North Charleston—the GOP’S first of 2016 and its sixth of the campaign—offered several textbook examples of such language. Here are the highlights:

paperwork error. Senator Ted Cruz used this term to make light of his failure during the 2012 Texas Republican Senate primary, when he stumped the Lone Star state with a populist message attacking Wall Street and big banks, to disclose two loans totaling over $1 million that he had received—from Citigroup and from Goldman Sachs (where his wife just happened to be employed)—to help finance his campaign. Cruz also claimed he made this “error” only on the second of two campaign finance reports he was required to submit—one before the election, and one afterwards. This was true—but only if you count backwards; it was in the document submitted before his Senate campaign had ended that he failed to mention his loans.

secular progressives. Ben Carson conjured up this clever phrase to imply—without actually saying so—that only atheists could possibly advocate policies such as, say, providing a safety net for the poor, or paying women equal wages for equal work. What’s worse, Carson intoned, the secular progressives have “beaten into submission” the majority of people in America who “actually have values and principles.” “It’s time to stand up for what we believe in,” he concluded.

“The New York Times is always wrong.” Especially when addressing a conservative-leaning audience, saying this is an excellent way of deflecting any charge against you that is serious enough for The Times to report, even if it’s true. Donald Trump used the phrase to great effect when Neal Cavuto asked him about a meeting with the Times’ editorial board during which Trump was quoted as saying that, if he were president, he would impose “up to a 45 percent tariff” on Chinese goods entering the U.S. After the debate, The Times released a tape recording of its meeting with Trump, which revealed that Trump had indeed said, “I would do a tax. And let me tell you what the tax should be. The tax should be 45 percent.”

Employment Prevention Agency. Senator Marco Rubio offered this Spinglish recasting of the EPA’s full name to suggest—with little if any actual evidence to support his implication—that environmental regulations enforced by the U.S. government are responsible for the plight of many of our nation’s unemployed.

“the most mistreated people in America.” Donald Trump invoked this phrase during the debate to characterize U.S. police officers. How narrowly our nation’s finest beat out groups such as the 15 million U.S. children who live in households too poor to provide them with adequate nutrition, or the estimated 20,000 convicts currently incarcerated in American prisons for crimes they did not commit, or the millions of women who are physically assaulted by their spouses each year, only Mr. Trump knows for sure.

The Obama-Clinton economy. Ted Cruz used this terminology to blame Democratic front-runner Hillary Clinton for the fact that a lower percentage of Americans are working today than at any time since 1977. According to the Federal Reserve Bank of Chicago, the principal cause of recent declines in the labor participation rate is the retirement of aging Baby Boomers, but, even if one overlooks this reality, it is not immediately clear how the actions of a secretary of state, especially one who has been out of office for three years, can be held responsible for the country’s current employment rate.

“the highest corporate tax in the world.” Governors John Kasich and Chris Christie both referred to the America’s corporate tax rate as “the highest in the world.” Well, it certainly is relatively high, largely because the U.S., unlike many other countries, does not impose a “value added tax” that hits the poor and the middle class much harder than corporate levies do. But Kasich and Christie’s claim still qualifies as Spinglish, because our nation’s corporate tax rate is not the world’s highest. That honor belongs to the United Arab Emirates, with Chad coming in a distant second.

death tax. This term, coined by Jim Martin of the 60 Plus Association as a “usefully derisive” substitute for the more politically neutral “estate tax,” was invoked by Ted Cruz during a presentation of all the distasteful levies his proposed flat tax will eliminate.

“strong powerful men.” In defending, in response to a question from moderator Neil Cavuto, his proposition that all Muslims be denied entrance to the country, Donald Trump stated that when he “looked at the line” of Syrian refugees pictured on a recent edition of Cavuto’s own show, he saw “very few women, very few children. Strong, powerful men, young, and people are looking at that and they’re saying what’s going on?” Not only is Trump’s graphic language reminiscent of Ronald Reagan’s references to “strapping young bucks” on food stamps waiting ahead of you in line “to buy a T-bone steak”; it also patently misrepresents the make-up of the Syrian refugee population. According to the UN High Commissioner for Refugees (as cited by The Washington Post’s Michelle Ye Hee Lee), only 6.5 percent of Syrian refugees are “young men.” And over 71 percent of them are women, girls, or children under 12.

New York values. A phrase coined by Senator Ted Cruz to intimate that, because Donald Trump hails from New York City, he must, by definition, be too left-leaning and progressive to represent the Republican Party. “I think most people know exactly what New York values are: socially liberal, pro-abortion, pro-gay marriage, focused around money and the media.” Cruz declared, adding that “Not a lot of conservatives come out of Manhattan, I’m just saying.” As Trump immediately noted, Cruz may have forgotten in the heat of the moment that the Big Apple was the long-time home and headquarters of the legendary National Review founder and long-time editor and eloquent right-wing spokesperson, William F. Buckley, Jr. And, Newsweek’s Graham Burningham reminds us, Rudy Giuliani, Charles and David Koch, Rupert Murdoch, Norman and John Podhoretz, and Ann Coulter are also part-time or full-time New Yorkers. (Were Cruz’s references to “money and the media” also specifically calculated to turn anti-Semitic conservatives away from Trump? What do you think?)

[AUTHOR’S NOTE: We have assembled these terms, as we do after each debate, purely as a public service (or, as some have insisted on calling it, a public self-service). Allegations that we are offering these compilations for the purpose of promoting our recent book, Spinglish: The Definitive Dictionary of Deceptive Language, have yet to be substantiated.]

Interview with a Bookstore: Kramerbooks & Afterwords 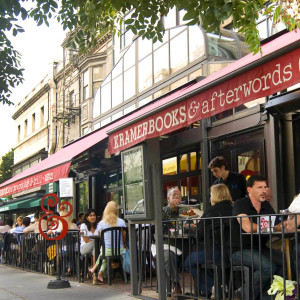 Interview with a Bookstore: Kramerbooks & Afterwords

Kramerbooks & Afterwords first opened its doors amid the bicentennial celebrations of 1976, and at the time was the first...
© LitHub
Back to top