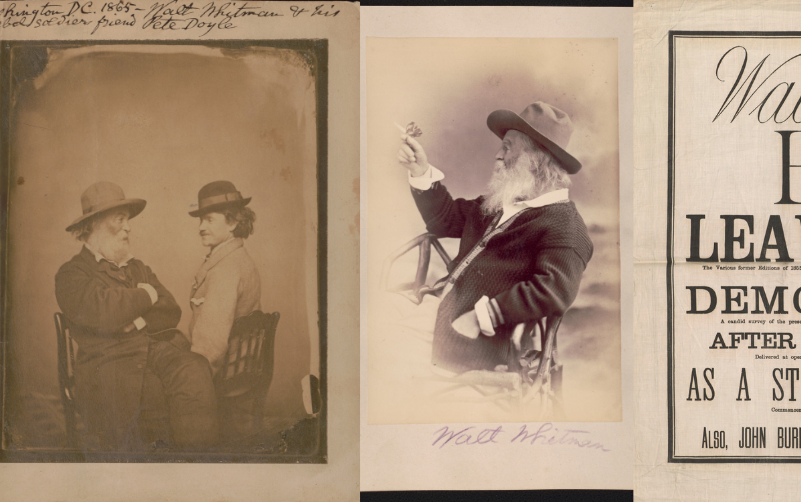 In celebration of the 200th anniversary of Walt Whitman’s birth, the Morgan Library & Museum exhibits the work of the beloved American poet. Walt Whitman: Bard of Democracy traces the development of his writing and influence, from his early days producing local journalism and sensational fiction to his later years writing the visionary poems that would revitalize American letters. 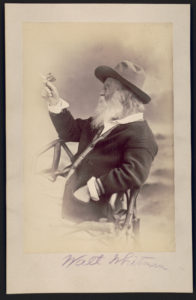 A native New Yorker, after the Civil War, the poet Walt Whitman lingered in Washington, enjoying new friendships and reasonably steady work as a government clerk. A deep relationship with his “rebel soldier friend,” Peter Doyle, brought special fulfillment in these years, and he continued to write and publish sporadically, in both prose and poetry.

But a stroke in 1873 led to his removal to Camden, New Jersey, near Philadelphia, where he spent his autumnal years. “Autumn Rivulets” was the title he gave to another cluster of poems, in 1881, which probed the aging process. 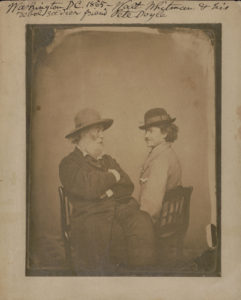 Yet Whitman remained young at heart, and cherished his role as a mentor to young nonconformists. This included a widening readership of gay readers and authors, before there was any vocabulary to describe same-sex attraction. “Through me forbidden voices,” Whitman had written in the first Leaves of Grass in 1855, and the voices had multiplied in the years that followed, as new writers took up the themes he had pioneered.

Ironically, Whitman was still in trouble with the censors for the heterosexual themes of his poetry, and he was banned in Boston in 1882—which conveniently drove up book sales. In a more tolerant 2019, it is clear how important Whitman was, and remains, as a role model to others seeking their own identities. 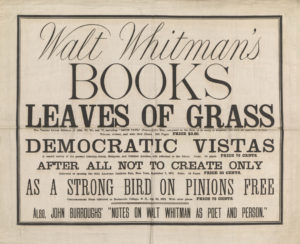 Near the end of his life, Whitman gave a title, Old Age Echoes, to a collection of small poems and prose pieces that his friend Horace Traubel wanted to issue (it came out in 1897, five years after Whitman’s death). Whitman added that these echoes were “reverberant, an aftermath.”

In the 20th and 21st centuries, the echoes never stopped reverberating, as young writers from all backgrounds continued to discover Whitman and reinterpret him for new generations. He did not quite anticipate social media, although he once wrote, “I triumphantly twittering.” But his all-embracing worldview matches well with the flood of writing that has been made possible by the Internet, the personal computer, and the mobile phone. It is impossible to know what Whitman would have made of this endless Song of the Selfie. But he certainly wanted to be here, with us, and as we seek him out in these rooms, we may find an outstretched hand, extending from these pieces of paper. In “Crossing Brooklyn Ferry,” he wrote, “consider, you who peruse me, whether I may not in unknown ways be looking upon you.”

Ted Widmer is Distinguished Lecturer at the Macaulay Honors College of the City University of New York. He has edited or written a dozen books, including the Library of America's anthology, American Speeches, and Young America: The Flowering of Democracy in New York City.

'The Wolves'
A Poem by Paisley Rekdal

On the Power of Ghostly Narrators 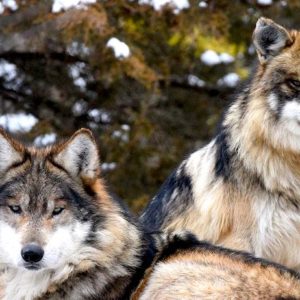 'The Wolves'
A Poem by Paisley Rekdal

It was the week of asking. Asking to watch her eat. Asking if she understood the doctors’ questions. Asking her to explain...
© LitHub
Back to top
Loading Comments...