"I watch the water rising in a few places, as if the city is porous."

I have finally plucked up the courage. Ten times in Venice and in a gondola for the first time. As I drink my coffee early in the morning on the corner of the Procuratie Nuove, they stand beside me: the gondolieri. Big conversations about yesterday’s match in their impenetrable Venetian dialect. It is cold on the water, a hot cappuccio helps. Outside, their slim, black, bird boats are lined up, the birds’ heads (they are birds’ heads—take a good look) pointing at the island where I am staying. Why did I never want to do it? Because it is the ultimate Venetian cliché?

That would be childish. Because of the faces of the people in the gondolas? What is it about those faces? The unbearable bliss of what has been achieved, the absolute Venetian baptism, which means you will always belong here? In the gondola, along with Thomas Mann, Mary McCarthy, Franz Kafka, Henry James, Ezra Pound. Louis Couperus? Ich bin auch ein Berliner, something like that? Or, if our neighbors in Kansas, Bielefeld, Wakayama, Novosibirsk, Barneveld could see us now—is it that expression? As if, down there on the water, they have draped the entire city around themselves like a cloak, a still yet swaying moment of fulfilment, swelling watery whispers around you in the quieter canals, the unseen man behind you, the ferryman with his strong, rhythmic movements. And yet, most people have not found the right facial expression, even though they are doing their best. This can only be because they know they are going nowhere and will soon arrive back at their point of departure. What kind of expression should you wear when the people in the vaporetto, who are actually going somewhere, are looking at you?

I had never done anything more than the traghetto, which is also a gondola, but just from one side to the other of the Canal Grande. A shaky climb aboard, the steady hand of the ferryman taking hold of your arm, trying to stand so you do not lose your balance or perching instead on the narrow plank so as not to lose face. Face or balance—that is what it is about. No, I had never done it before. Last year, when it snowed in Venice and we had a small apartment by Campo San Samuele, down an alleyway in the back part of what must once have been a grand palazzo (a dark, hidden space behind bars, with a dog that always barked when we came in, and barely a view of the water), I had seen Japanese people passing by early in the morning, huddled beneath umbrellas, snow on their hats and scarves, beaming with joy. The gondoliere sang about the sun as he wiped the snow out of his eyes. O sole mio. I admired him. The boat came past slowly and I knew they would never forget that journey, I wished that I knew the Japanese word for “never”. If you have not been in a gondola, you have never been to Venice. Everyone takes a photograph of everyone else: proof. You buy the holiday in Japan including your gondola ride. But was that any reason for me not to do it? Soaked Chinese people in the rain, Americans with a bottle of prosecco? I had tried to find a rational excuse for my nonsense, a gondola is a means of transportation, which you take when you are going somewhere, as in the old days, when there were no vaporetti. Just bobbing around a bit, that could never have been the intention, even though I always wander aimlessly about the city on foot. An even blacker gondola than usual, with a coffin under a gold-embroidered cloth, on its way to San Michele, the island of the dead, that was real, the essence of transportation. All the rest was tourism, affectation, theatre, something for other people.

When the water has receded, the platforms remain as a reminder that this can all change, that the full moon of the Romantic paintings sometimes, in an ill humor, takes charge of the water.

And now? Now we ourselves were the other people, sitting in a gondola, that shaky climb aboard, too heavy, the little boat tilting, but the practiced hand assists clumsy bodies, deposits them on cushions, the journey can begin and at once the world is changed, taking place above you, you see not faces but shoes on the quays beside you, the buildings stretch out and suddenly you discover all kinds of things you have never paid attention to before; a gentle swell holds sway over the city, you see the walls as living skin, injuries, wounds, scars, healing, old age, history, black seaweed, green seaweed, the mysterious underside of bridges, marble and masonry, the other boats, life afloat in a city of stone and water. In a low voice the gondoliere recites the names of churches and large buildings, as if an elderly priest were praying a litany to which you do not have to listen. I try to follow where we are on the map but soon lose track. Sometimes, when we go around a sharp corner, he lets out a loud “Oi!”, as if we are in mortal danger, but I have long since surrendered and, like a child in the womb, I listen to the murmuring of the amniotic water and wish never to be born again.

A memory. A winter’s day. It has snowed on Piazza San Marco, but the snow soon melted. I am standing in one of the galleries, looking out at the wet square, thinking I can see the meltwater slowly running away but, as in Nijhoff’s poem, the reality turns out to be different: I do not see what I see, because, as if there is a spring in the middle of the stones of the square, I watch the water rising in a few places, as if the city is porous. I have not heard the sirens that warn of seriously high water, so it cannot be bad, and yet I cannot take my eyes off it. There should be earth beneath it, not water, a city is not a ship. Or is it? I am standing on stone, I am not Jesus. But am I really standing on stone? In the distance, I can see people lugging those peculiar boardwalks—elongated wooden structures on metal legs, which allow you to continue your route just above the surface of the water without having to wade through it. It can rise to half a meter, and if that happens, narrow paths are built with those boardwalks, upon which pedestrians struggle to pass one another. The mud that comes from the bottom of the lagoon is black, water of the dead from the Lethe, the river of oblivion. I have stood there when they were dredging somewhere, with one of those claws that digs into the depths and vomits forth pitch-black mud, along with all manner of objects from the realm of the dead that have assumed the same color as water in mourning, in a counter-city that lies down below, biding its time.

When the water has receded, the platforms remain as a reminder that this can all change, that the full moon of the Romantic paintings sometimes, in an ill humor, takes charge of the water. And because, since the last ice age, there has been ten times more water than land in the lagoon, people in this battle zone between rivers and sea have had to survive as best they can. The thought of the Netherlands and the sea is, of course, not far distant. The branches of the Po Delta brought sand from the mountains of the hinterland, the currents of the sea fought against it, sandbanks formed that wanted to enclose the lagoon, the delta’s tributaries had to be diverted to prevent the whole area from silting up and to pour fresh water into the sea through three openings. In an aerial photograph taken from a great height, the lagoon resembles a living organism, the waterways as the blood vessels, the rerouted rivers to the north and south as arteries, the industrial estates of Mestre and Porto Marghera as large tumors, and Venice itself a jewel casually discarded and lost. This lends the surrounding marshes the air of a royal robe for a king on a shaky throne of Istrian sandstone, the heroic variety of stone that can withstand the voracity of seawater, just like the pines that also came from Istria and, as in Amsterdam, are rammed deep into sand and clay to carry the weight of houses and palaces. Whoever achieved all of that could go forth and conquer the world. 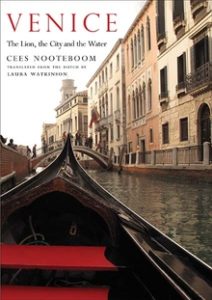 From Venice: The Lion, the City and the Water by Cees Nooteboom, translated from the Dutch by Laura Watkinson, an award-winning translator of Dutch, Italian, and German. Published by Yale University Press in November 2020 in the Margellos World Republic of Letters series. Reproduced by permission.

Cees Nooteboom, born in 1933, is a Dutch novelist, poet, and travel writer who has been the recipient of the Pegasus Prize and the Aristeion Prize. His previous books of travel writing include Roads to Santiago and Roads to Berlin. 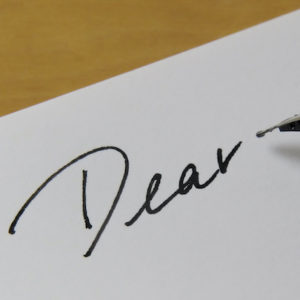 Dear Laura Tweedle Rambotham, You don’t know me, but I know you. The Getting of Wisdom by Henry Handel Richardson...
© LitHub
Back to top
Loading Comments...