The following is from Graeme Macrae Burnet's Case Study. Burnet is one of the UK’s leading contemporary novelists. His novels, which include the Booker Prize-shortlisted His Bloody Project, have been translated into more than twenty languages. He lives and works in Glasgow.

I approached an earnest young man in wire-framed glasses and a Fair Isle tank-top. He did not look the type to pass judgement on a customer’s tastes. In hushed tones, I explained that I had recently read Untherapy and asked if Collins Braithwaite had written anything else. The young man looked at me as if I had just emerged from the ark. ‘Anything else?’ he replied. ‘I’ll say!’ With a movement of his head he indicated that I should follow him and I had the feeling that we were then engaged in a kind of conspiracy. Two floors above, we arrived at the psychology section. He pulled a book from the shelves and handed it to me with the whispered words, ‘Incendiary stuff.’ I looked down. The cover featured a silhouette of a human body, fractured into pieces. The title of the book was Kill Your Self. That afternoon at work, I felt as if I was in possession of an item of contraband. I found myself unable to concentrate and told Mr Brownlee I had the most dreadful headache and would he mind awfully if I left early. Back in my room I opened the package. I’m afraid I cannot attest to the book’s incendiary qualities as it made no sense whatsoever to me. I do not doubt that this was due to my intellectual shortcomings, but it appeared to be no more than a jumble of incomprehensible sentences, each having no discernible relationship to its neighbours. Still, the title chilled me, and in it I saw the method in Dr Braithwaite’s apparent madness.

Naturally, my first instinct was to go directly to the police. The following morning, I telephoned Mr Brownlee and told him I would be late to work. He asked if I was still sick and I replied that a crime had been committed and I was required to present myself as a witness. I said nothing to my father, but as I buttered my toast at breakfast, I imagined myself marching into the police station on Harrow Road and declaring that I wished to report a murder. When asked to provide some evidence to support my allegation, I would calmly place Dr Braithwaite’s books on the counter. ‘All you need to know,’ I would say dramatically, ‘is contained within these pages.’

I got no further than the corner of Elgin Avenue. I pictured the puzzled expression on the face of the kindly Dixon of Dock Green type behind the counter. What exactly was it I was alleging? he would ask. Perhaps he would go and consult with some unseen superior, or would simply disappear behind a partition to tell his colleagues that he had a right nutcase out there. I imagined my face reddening as I overheard their laughter. In any case I realised that in the absence of any real evidence, my plan was defective and would lead only to humiliation.

It was, instead, a simple enough matter to make an appointment with Dr Braithwaite. I found his number in the Yellow Pages under ‘Miscellaneous Services’. I telephoned from my desk at work one afternoon when Mr Brownlee was out. A girl answered brightly. I nervously asked if it would be possible to arrange a consultation. ‘Of course,’ she replied, as if it were the most mundane thing in the world. Aside from my name, no further questions were asked. We agreed that I would come at half past four the following Tuesday. It was as straightforward as making an appointment at the dentist’s, yet when I replaced the receiver I felt that I had committed the most audacious act of my life.

I arrived at Chalk Farm Station fully an hour before my allotted time. Outside the station I asked directions to Ainger Road. The man I stopped began to describe the route, before breaking off and offering to accompany me. I declined his offer, not wishing to make small talk as we walked, far less to face an interrogation about my reasons for being in the area.

‘It’s no trouble,’ he replied. ‘On the contrary, it would be my pleasure. I’m going that way myself.’ He was a handsome fellow in his late twenties, dressed in a fisherman’s sweater and short black coat. He was clean-shaven but had something of the air of the beatnik. He wore no hat and had thick dark hair that rose in an impressive swell above his forehead. He had an accent I could not place, but which was not wholly unpleasant. The situation was entirely of my own doing. I had allowed several perfectly innocuous persons to pass before I had addressed him. Now I was in a pickle.

‘I promise not to molest you,’ he said, before adding with a laugh, ‘unless of course you want me to.’

I had a vision of being dragged into some shrubbery and the man forcing himself upon me. That might at least provide some material for my conversation with Dr Braithwaite. As I could think of no way of extricating myself from the situation, we fell into step. My chaperon thrust his hands deep into the pockets of his coat, as if to reassure me that he had no intention of groping me. He told me his name and asked what mine was. Such exchanges of personal information are, I believe, quite normal, so I saw no reason not to take the chance to try out my new identity.

I had decided on this name while sitting in the Lyons on Elgin Avenue. The names I had

previously thought up felt conspicuously fake: Olivia Carruthers, Elizabeth Drayton, Patricia Robson. They none of them had the ring of truth. A van was parked on the opposite side of the street with the words James Smith & Sons, Central Heating Engineers painted on the side. ‘Smith’ was exactly the sort of innocuous name that one would never think to choose as an alias, and was thus ideal for my purpose. Then, when I decided to alter the spelling, I felt I had the beginnings of a convincing persona. ‘Smyth with a Y,’ I would say in an offhand manner, as if I had grown weary of repeating it all my life. And, perhaps on account of Mrs du Maurier’s novel, Rebecca had always struck me as the most dazzling of names. I liked the way its three short syllables felt in my mouth, ending in that breathy, open-lipped exhalation. My own name offered no such sensual pleasure. It was a single-syllabled brick, fit only for head girls with sensible shoes. Why should I not, for once, be a Rebecca? Perhaps I would tell Dr Braithwaite that my nervous troubles were caused by the inadequacy of not living up to the image of my name. I practised presenting my hand to my own image in front of the bathroom mirror, palm downwards, fingers slightly curled in the way that women with expectations do. Then I would glance up with what I thought passed for a flirtatious smile. I had already begun to enjoy being Rebecca Smyth. And now, as I said it out loud for the first time, Tom (or whatever his name was) had batted not an eyelid. Why should he? He was not the type that girls would fob off with un nom d’emprunt.

‘And what brings you to Primrose Hill, Rebecca Smyth?’ he said.

Rebecca, I decided, would not be one to be ashamed of such a thing, so I replied that I had an appointment with a psychiatrist.

This caused my companion, if not to stop in his tracks, then to at least evaluate me afresh. His lower lip jutted out. ‘If you’ll forgive me, you don’t seem the type.’

Tom looked abashed, as if he might have offended me.

‘I can assure you I’m mad as a March hare,’ I said with Rebecca’s most winning smile.

He did not seem the least bit put off. ‘Well, you’re the most attractive March hare I’ve met,’ he said.

I made no reaction to this. A girl like Rebecca would be quite accustomed to hearing such blandishments. ‘And what brings you here?’ I asked.

‘Aren’t you going to ask me to come and pose for you?’ I asked. It was rather a lark being Rebecca.

‘I’m afraid I’m not that kind of photographer,’ he said. ‘I take pictures of things, not people. Food mixers, sets of cutlery, tins of soup, that sort of stuff.’

‘How glamorous,’ I said.

‘It pays the old Duke of Kent,’ he replied.

‘I’m sorry?’ I said, taken aback that the fellow might have some connection to royalty.

‘Duke of Kent. Rent,’ he said, and I realised that he had been indulging in the silly custom of rhyming slang. He at least had the good grace to look as abashed as I did.

I realised with a shiver that we were that very moment crossing the overpass from which Veronica had thrown herself. I had never visited before. It was a drab place to end one’s life, but I suppose as good as any other.

‘Are you cold?’ Tom asked. Clearly he was the solicitous type.

I pulled my coat tight around my neck and smiled at him. ‘I just felt a sudden breeze.’

We turned into what resembled a village high street. Tom halted at a junction and indicated the way to Ainger Road. Rebecca Smyth held out her hand. Tom took it and expressed the view that it had been a pleasure to meet her.

‘Likewise,’ she said, then turned on her heel and walked off.

‘You still don’t look like a nut,’ he called out to her retreating back. I half expected him to come after me and ask for my telephone number, but he did not do so. When, after a respectable period of time had elapsed (one does not wish to appear desperate), I looked over my shoulder, he was gone. 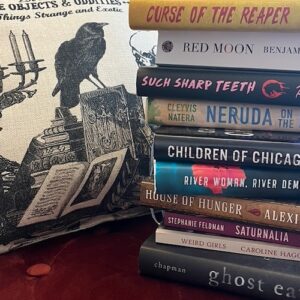 The Annotated Nightstand: What Erika T. Wurth is Reading Now and Next Erika T. Wurth’s debut novel White Horse follows our protagonist Kari, who lives in the Denver area and frequents a dive...
© LitHub
Back to top