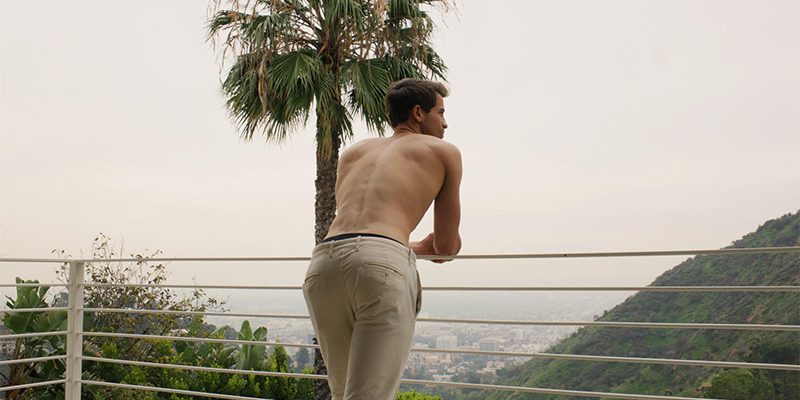 Can you sit through all 9 minutes of this Bret Easton Ellis-directed sunglasses ad?

You probably know that Bret Easton Ellis is not only a novelist but a director, but did you know that he once directed a nine (9) minute long ad Persol sunglasses? (And do you hate that that string of words exists? Me too.)

Between his ill-received books and his terrible hot takes, it’s easy to see how you might have missed this “advertisement/short film” pushing $300 sunglasses. But I dug it up for your viewing pleasure!

“Orpheus” opens on a black screen. You hear blaring sirens. Cut to a smoky Los Angeles landscape. (Where else?) Helicopters whirr in the background. The camera focuses on a man driving his convertible, checking his reflection in the rearview mirror. He is wearing (wait for it) Persol sunglasses. Doesn’t he look cool? Don’t you want to be him?

Cut to: the same guy, sitting in his room, brooding, fiddling with his guitar. (Of course.)

Cut to: a car driving down an empty and dark road.

Cut to: the same guy, smoldering into the camera for no apparent reason.

And then there’s a pretty woman in a recording studio. Menacing music plays. In the background, you can see television reports of the city on fire. In the studio, another white man stands up. He looks angry. His arms are crossed. There’s still no dialogue. Only the deafening music. Now she looks angry! She throws her headphones at him and storms out! He follows her out of the building, his expensive Persol sunglasses subtly hooked to the front of his shirt.

Cut to: the first guy, still playing with his electric guitar, receiving a text message, presumably from that woman. The camera pans out so you can see his cool kid cigarettes in the ash tray on his desk.

Throw in some more scenes of the first guy driving around in his midlife crisis convertible, coyly adjusting his sunglasses. Then we see the second guy, topless and vaguely muscular, on a balcony somewhere. He, too, smolders at the camera for no reason.

Cut to: second guy in bed with the woman from the recording studio? (If I’m being honest, I had to watch this video twice to really get the story straight. It’s a love triangle, certainly, but all the beautiful, shiny, white people had me confused.)

It goes on like this. Reader, we’re only at the two-minute mark! There are many minutes ahead of you that involve gorgeous models hanging out by the pool and more moody Los Angeles shots and lovers’ quarrels. At one point, the first guy is drunk and accidentally smashes a bottle of vodka at the feet of his lover.

As I’m sure you can surmise from the advertisement/short film’s title, the Literary Brat Pack novelist is pulling from the myth of Orpheus, the singer/poet/musician who loses his wife to death. In the credits, the first guy is indeed Orpheus, while the woman is Eurydice. The third man is listed as the Devil. Only Bret Easton Ellis would not want the woman to end up with the slightly-less-moody guy that doesn’t scream at her during parties and break glass? I think we’re supposed to assume she’s being pulled further into the hell of the LA music industry. But that’s not hell. Surely, this is.