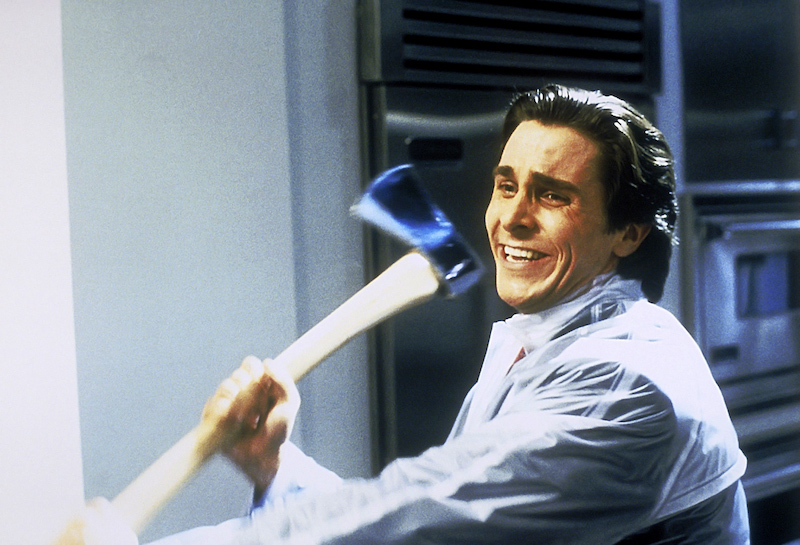 Yesterday, MovieMaker published an oral history of the film adaption of Bret Easton Ellis’ American Psycho (a book that Roger Rosenblatt described, in his review in The New York Times, as “the journal Dorian Gray would have written had he been a high school sophomore”).

The movie—written by Mary Harron and Guinevere Turner and directed by Harron—was released 20 years ago. While some critics were turned off by its mix of graphic violence and sex, social satire, and sometimes slapstick humor (Christian Bale-as-Patrick Bateman gleefully axing his professional rival to death while listening to “Hip To Be Square”!), both The New York Times and EW praised it. Stephen Holden write in the Times that the movie “salvage[d] a novel widely loathed for its putative misogyny and gruesome torture scenes by removing its excess fat in a kind of cinematic liposuction.”

In the oral history, said (putative misogynist) Bret Easton Ellis attributes the disconnect between the receptions to his book and Harron’s film to—you guessed it—”woke-ness”!

“I think that could be the flourishing of woke-ness in the culture—me being the dark prince of literature, and I write this book that upsets so many people, I need to be put in my place. And what better narrative is there than that two women did it? That’s very appealing.”

Yeah, sounds about right coming from the guy who wrote an entire book based on the premise that Millennials are “Generation Wuss.”

The whole thing is worth a read, though, if only for the good 90s celebrity gossip (like the fact that Gloria Steinem took Leonardo DiCaprio to a baseball game to convince him not to play Bateman).