Frédéric Beigbeder on Life Among the Immortality-Seekers

My obsession with sanatoriums must be genetic; I come from a family of doctors who, in the early 20th century, established a dozen health spas in Béarn. When I was a child, my grandfather told me that between the wars patients with tuberculosis—the men in black, the women in formal gowns—dined to the sound of a string quartet as they watched the sun set over the Pyrenees. These days, visitors of spa clinics lose weight in terry-towel bathrobes and pad from the sauna to the pool in disposable slippers. It’s a far cry from The Magic Mountain. I pity all these rarely used bodies prepared to go without food in the hope of ramping up their sex appeal. How can anyone be alluring in a bathrobe and flip-flops? Don’t they realize their sex life is over? The human species has many undeniable qualities, but its urges have led to its annihilation. It’s a little like my city: pre-war Paris was a global centre of art and culture; these days, it’s a museum plagued by pollution and increasingly abandoned by tourists put off by terrorist attacks.

The human race has to transform or die out, both of which amount to the same thing: humanity, as we’ve known it since the era of Christ, is dying anyway. Paris will never again be Paris and Man will never again be as he was before Google. What is humiliating about the human condition is that its fate is inexorable. If someone were to discover a way to reverse time… they would be the greatest benefactor humanity has ever known.

The human race has to transform or die out, both of which amount to the same thing: humanity, as we’ve known it since the era of Christ, is dying anyway.

Reception phoned our room when the packages containing Pepper were delivered. There was a heated debate between the director and one of the nurses: Were robots permitted at vivamayr? Eventually, special permission was granted for Pepper to be admitted, provided he remained in our room. Since he was not waterproof, he was not permitted to avail himself of the thalassotherapy on offer.

“Where are we?” Pepper asked when Romy turned him on. (His GPS system wasn’t connected to the Wi-Fi.)

“On the shores of the Wörthersee in Austria,” I said.

“Eva Braun used to love crossing the Wörthersee in a rowing boat.” (Clearly, the Wi-Fi was working.)

“You’re lucky you don’t have to eat,” Romy said. “The food here is disgusting.”

While Pepper recovered his energy after a long trip in the baggage hold, we headed out for some sightseeing. Our room looked out onto a small church on a hill overlooking the lake. To the west, the eternal snow glittered. On the shores of the lake, bulrushes bowed their heads as though to drink the limpid waters. The clinic had been built on an isthmus of land that extended into the lake. The scenery was achingly romantic, as though we had wandered into a painting by Caspar David Friedrich, the first artist to paint men from behind, as intruders in the landscape. Our little stroll led us to the door of the village church of Maria Wörth, whose belfry, according to the sign, dated back to the year 875. Mass was being said; German hymns drifted through the open door. We stepped into the coolness. Before a congregation of thirty, a priest wearing a purple chasuble intoned, “Mein Gott, mein Gott, warum hast du mich verlassen?”

“It’s what Jesus said on the cross: ‘My God, my God, why hast thou forsaken me?’”

As in fairy tales, the inside of the church seemed bigger than the outside. The priest giving the sermon rolled his Rs theatrically. Romy found it funny, the way he said “Yaysus Chrrrristus.” I leafed through a tourist brochure that said Gustav Mahler had composed his fifth symphony here, in a small cabin by the lake. The one with the depressing adagietto that features in Visconti’s Death in Venice. Our little trip was conjuring up images of death and the works of Thomas Mann. I dearly hoped I was not as doomed as the elderly Aschenbach, leering at young Tadzio.

The rest of the day passed peacefully. Romy swam in the pool and had a foot massage. I was given a battery of allergy tests: a female doctor in Birkenstock sandals tipped various powders onto my tongue while testing my muscular reflexes. In an accent that made her sound like Arnold Schwarzenegger, she explained that I was allergic to histamine, a substance found in vintage wines and stinky cheese. Life is rough: I was allergic to my two favorite foods. After that, she had me place my feet in a salt bath fitted with electrodes. After five minutes of electrolysis, the water turned brown. In the Bible, Jesus washes people’s feet to cleanse them of sin. The detox clinic has simply brought his methods up to date. The process was supposed to rid me of toxins, but I felt sullied. The woman said “ja, ja” after every sentence. She played guessing games as she massaged my stomach:

Once again, she sprinkled my tongue with various kinds of foul powder: dried egg yolk, goat’s cheese, lactose, fructose, flour… then she took my blood pressure.

“Gut. You are suffering from fatty liver and hypertension. I will prescribe zinc, selenium, magnesium, and glutamine.”

Either she was extremely lucky or kinesiology is an exact science. Three swans were sunning themselves on the lawn, watched by the towering fir trees. Clouds were gliding across the surface of the lake. I was starving to death and frequently racing to the toilet because of the Epsom salts (a sort of human drain cleaner, I’ll spare you the details), but, in spite of everything, I still had faith in my purified future.

Back in our room, Pepper was asking Romy general knowledge questions.

“What is the capital of Bermuda?”

“Where was Mozart born?”

In fact, what the robot was offering was a high-tech version of Trivial Pursuit. Romy had raided our secret stash of snacks. I never thought that I would one day gaze at an empty pack of Chipsters with such desperation. I was eating nothing but spinach for every meal. Dieting may increase life expectancy … but mostly it increases hunger. I stared longingly at Romy’s stash of snacks like Tantalus in the Odyssey gazes at the fruit that disappears as soon as he reaches for it. It was at this moment that the limpid, transparent waters of the lake ringed by pine forests were cleaved by a speedboat trailing a fat man in an orange lifejacket in its wake. That was the last notable event of the day. 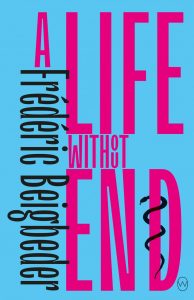 From A Life Without End by Frédéric Beigbeder, translated by Frank Wynne. Published by World Editions.

Frédéric Beigbeder is a French journalist and critic, and is responsible for the literary section of Le Figaro Magazine. Also a bestselling author, his novel 99 Francs both got him fired from his advertising job and established him as a controversial force within French literature. For his other novels, he has been awarded various prizes including the 2003 Prix Interallié and the 2009 Prix Renaudot, and the Independent Foreign Fiction Prize in 2005 for his novel Windows on the World. He is a regular guest on French national morning radio, and a frequent contributor to El País Icon (Spain), Interview (Germany), and Esquire (Russia).

Dodging Covid: A Coronavirus Diary That Begins in January 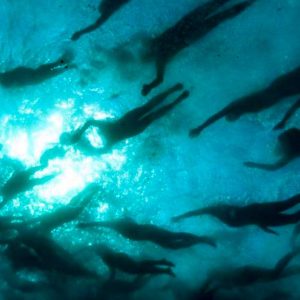 Something about the rhythm of how we breathe while we’re in the water changes us. Deep breathing research is in its infancy,...
© LitHub
Back to top
Loading Comments...