Krisztina Tóth: A Letter From Hungary

The doctor examining my heart didn’t rely on tests and modern imaging techniques. He wanted to hear its beat with his own ears. He listened closely and intently to the phonendoscope.

I wanted to speak, to tell him about the palpitations, sweating on the morning bus, but he motioned for quiet, and the little cone padded about my chest. When he was done, he hung the phonendoscope around his neck, and said, out of the blue:

Taken aback, I felt like he’d been listening to the secrets of my soul, and was now assuring me I could hide nothing from him, because he heard the whirr of my desires, the fizz of my old resentments, in the vein walls he heard the faint pulse of angers hidden even from myself. He continued:

“I know you’re a writer and a poet. I read one of your books, the pixel one. Are you one of those abstract women?”

I gave him a shocked look. Did he really think our professions differed so much? That a poet is such an eccentric, sitting at her desk, shut off from the world, and staring out her window, waiting all day for the rumbling bin lorry to leave, and inspiration to turn the corner?

Let’s stop there for a second. I bet you think the same! Or at least some of you do. Some of you think a poet is a shaggy, feral, lonesome creature—cowering at home, doing next to nothing. Oh alright, sometimes scribbling a line or two.

Can we transform our thinking after this series of movements and crises? Can we hear the warning calls?

I breathed a deep sigh. Deeper than when the doctor asked me to breathe in. A poem is not distillation, it is not pure abstraction; it is the parallel sensory reality itself. A poem is the essence of our existence. A poem is an ECG trace.

Months passed, the world turned inside out. As we say in Hungarian: big problems solve the smaller ones. My random palpitations changed to a steady, controlled, and restrained anxiety. The pandemic swept the world and motioned for us to be humble. Just when humans began to think they were all-powerful, when they knew almost everything about human genes, along came a little virus and taught them fear. Here in Europe, despite tensions seemingly close to snapping, there is relative peace. The last war, in the classical sense, was in the 90s in the Balkans. In these months now, we learned anxiety, we could experience the feeling of our lives careering off track—a time to put aside our grudges and pull together, to survive, to endure the disaster.

The poorest, those on the periphery, are being swept to the edges of society irrevocably, lost, forced onto the streets, starved. It’s them who deserve our attention. For years we talked about pollution, about climate change, about overconsumption, about the murderous, toxic effects of a faster world, but apparently, until this disaster, we never understood that time was up. We need to radically rethink how we live. These recent and ongoing events are awful, yet apparently that is what it took to reach our stimulus threshold. We witnessed what happens when a permanent, nerve-wracking din on the streets is replaced by a deafening silence: we stop in our tracks, we turn in circles, crying disbelief.

How many times in our adult, informed lives have we heard the word racism? The death of George Floyd, images depicting one concrete person’s concrete, senseless and brutal suffering have filled the word with meaning once again, and the Black Lives Matter movement has swept like a hurricane through the United States, and Europe too. Exactly as the refugee crisis did, and the #MeToo movement before it. Soon this too will settle, like the waves of #MeToo. What will remain from this emotionally charged impulse to fight? What did #MeToo bring? Our contentment with blond jokes being told in hushed voices. Our contentment because even that’s something. But in my country and in others, the poet is still a man with a beard, a mustache, or at least a man in glasses. And even estimating optimistically, it will take decades for this to change. Can we transform our thinking after this series of movements and crises? Can we hear the warning calls?

Does this much repeated word, Europe, say anything to us? Does the word hold any meaning, does it stir any thought when uttered the fifteenth time in a day, or must a newer cataclysm occur for this sequence of letters to again find meaning?


Take a deep breath behind your mask, like this, all together, all at once. Something’s rattling, near the heart. Something is wrong in Europe.

I’m asking this as the citizen of a country that lies in the coronary-artery-diseased heart of Europe, and since only 2004 is part of the European Union. In that year, we Hungarians understood what this word meant to us, but that meaning has faded. It only emerges now in relation to EU funding. Europe is a blue flag decorated with stars, hung at events. A geographical concept, not a cultural-historical space of one spirit. If its original meaning does convey some form of spirit, it’s often in opposition to something else. But why? Europe becomes a place to be protected from barbarians, from inundation, from migrants. Or from a hostile ideology set on wiping out our individuality, our national qualities. For the love of God, is this what Europe means? And we still believe it’s where the world’s heart beats?

If it’s still beating—everybody be quiet for a second: is it?

Who can remember Europe’s main strengths? Judeo-Christian culture and Greek-Roman culture, correct? These continue to sustain it, with every breath we take these remind us we are Europeans. A feeling that’s strongest when fate casts us across the globe. In the US or in Asia, we immediately feel we have more in common with other Europeans, regardless of language barriers and cultural differences, because in a concrete, practical situation, we might sense the shared history and fate before the possible differences. Compare the feeling of community when a first-time traveler hears her mother tongue abroad, to hearing it when she’s on a morning bus crushed between her compatriots. There, on the bus, gasping for air in the crowds, she doesn’t marvel at the sound of her own beautiful native tongue. Or if she does, if she is so strange: she is a poet.

When she isn’t sitting at home, when she isn’t waiting for the rumbling bin lorry to leave, and inspiration to turn the corner, she collects words. And when she isn’t collecting words, she listens. She listens closely and intently, just like the cardiologist with the phonendoscope.

Take a deep breath behind your mask, like this, all together, all at once. Something’s rattling, near the heart. Something is wrong in Europe. Believe us. It might not show in the imaging techniques yet, but we can hear it. It shows in the poem. Be quiet, let’s listen! Let’s read a poem.

Krisztina Tóth is one of the most highly acclaimed young Hungarian poets. She has won several awards, including the Graves Prize (1996), Déry Tibor Prize (1996), József Attila Prize (2000). Her poetry has been translated into many languages and included in various anthologies. She lives in Budapest, where, apart from writing and translating poetry, she designs and produces stained glass windows.

A Lineage of Artists: Polly Crosby on Her Famous Illustrator Uncles 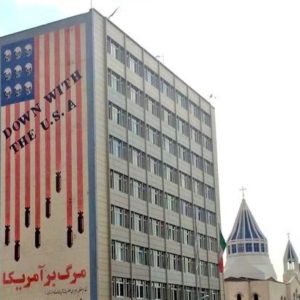 The graffiti looms several stories high from a building overlooking Karim Khan Bridge in downtown Tehran: Down with the USA;...
© LitHub
Back to top